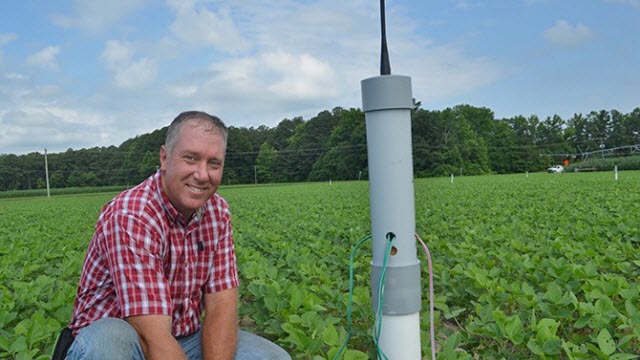 James Adkins at the Warrington Farm, where UD scientists are conducting irrigation research using the latest technology, including sensors that monitor soil moisture content.Photo courtesy of the University of Delaware

When James Adkins started working at the Warrington Farm just south of Milton, Delaware, in 1999, the farm was plagued with poor drainage, noxious weeds, and poor soil fertility.

Now, 17 years later, steady improvements to the soil and the drainage system allow University of Delaware researchers the ability to study irrigation and fertigation treatments for plots of soybean, wheat, and corn and to make recommendations to regional growers on how to best irrigate and fertilize their crops.

Those issues are exceptionally important to farmers—in both Delaware, which boasts around 128,000 acres of irrigated cropland, and around the world—who must balance use of the correct amount of water and fertilizer to produce the best crop yields from the soils they are working.

Given to the university by Everett Warrington in 1992, the Warrington Farm is equipped with a variable rate center pivot irrigation system, which was upgraded in 2012 from a previous version that Adkins, associate scientist for irrigation engineering at UD’s Carvel Research and Education Center, built with Ian McCann, an irrigation and water management specialist, in 2001.

“At the time, it was like VHS and Betamax, and I built a Betamax,” said Adkins, who explained that before getting the new system in place, researchers would have to stand on the pivot point and wait for the water to hit a flag and then turn a combination of toggle switches to make the machine do what it needed to do.

In 2016, the irrigation system was upgraded to reflect the latest advancements in irrigation management and technology.

Now, researchers are able to use geographic information system (GIS) software to map where and how they want certain research plots irrigated. The primary goal is to evaluate and identify the most effective and efficient water management strategies to enhance crop production and nutrient management.

To plant the crops, Adkins uses a tractor equipped with real-time kinematic steering that can be set up to drive plus or minus an inch one way or the other for each pass so that all the rows on the farm are planted perfectly straight. He then takes that map out of the tractor and uses it with the pivot to determine how the farm plots get irrigated.

“We’ve got the farm randomized into about 300 individual 60- by 60-foot squares and we categorize the soils based on a range of factors such as electrical connectivity, which is a proxy for soil moisture holding capacity, and clay content. We’re categorizing them in such a way that we’ve got five tiers and we plant each of our treatments in each tier. We want to make sure that ‘Treatment One’ doesn’t always end up in the best soil and make sure it gets into all five tiers,” said Adkins.

Each square is irrigated differently, and every morning the researchers collect data from sensors that monitor soil moisture content at 6, 12, and 18 inches.

The data comes from watermark sensors that are hardwired to a wireless transmitter that sends data to a tower where 11 machines record all the information.

“We’ve got about 200 stations with three sensors each that log each hour so we’re looking at a large volume of data each day. We can tell where the roots of a crop are by looking at the soil moisture values because when the sun comes up, the plant starts using water so we’ll see that soil moisture profile start to drop. When the sun goes down, the plant is no longer using water so it will level off. By watching each depth, we can get a good idea where our root zone is and thus change how we irrigate,” said Adkins.

By analyzing the data for each plot, the researchers can prepare a prescription for how the machine will run for the day.

“If we have a treatment triggered by a sensor that reads 20 centibars or above—for instance, if we get in one morning and we have one plot at 21 centibars—that square gets irrigated,” said Adkins. “It’s a mechanism to be able to evaluate whether sensor-driven irrigation has an effect on yield and water use efficiency.”

Trevor Aldred, who is working on the farm for the summer before heading to medical school after graduating from UD with an honors degree in biological sciences, enters the data every morning into a spreadsheet that is color coded to tell the researchers which plots need to be irrigated and how they need to be irrigated.

With the soybean research, Adkins said the study is mostly devoted to the timing of application.

“We find that soybeans respond to water at a very particular time and if you just water based on conventional methods, you’ll actually hurt yield because it will result in a plant that is too big and that falls down,” said Adkins.

With the corn, they are looking at fertigation, mostly in regards to nitrogen use efficiency, with 11 different treatments replicated five times for a total of 55 treatment blocks.

In addition to the above-ground center pivot irrigation plots, there is a section of the farm devoted to subsurface drip irrigation (SDI).

For SDI research on a randomized population study on soybeans, Adkins uses a variable rate planter to put seeds in the field and color codes each section of the soybean crop, with each color representing a different population.

“There are four different populations and as the planter draws across the field, it’s planting an orange section with 180,000 seeds, the yellow area goes up to 220,000, then back to 180,000, then to 140,000, and then it turns around. The planter responds to a map that I drew and uploaded to the tractor,” said Adkins.

All four populations will be irrigated with SDI and end up in each irrigation treatment so the researchers have the ability to compare population with irrigation rate.

SDI is exactly as it sounds, with water running underground in order to irrigate a crop. The Warrington Farm is equipped with a variable frequency drive, a pump in the ground that changes speed to match the flow demand that can reach up to 475 gallons a minute. A control box handles 42 zones that are roughly a quarter of an acre each.

“Each zone can be timed to come on whenever we want so we’re taking the information on soil moisture values and we’ve got schedules in there for all kinds of different ways that we’re irrigating,” said Adkins.

Adkins said that SDI is a good option for irregularly shaped fields that don’t have room to fit a pivot and that it works well in heavier soil types, like loam soils and clays, because there’s enough hydraulic connectivity in those denser soils to wick moisture away from the drip tape and get it to the soil surface. For sandier soils, however, it’s hard to get the water to move vertically in the soil profile.

“When we bury the tape at 16 inches—and we have to do that in order to prevent it from being damaged by farm equipment—we don’t get a lot of it to come up to the surface. Early in the season when there are no roots down to that depth, we end up pumping considerably more water to try to get that water to move vertically in the profile so the efficiency we gain on the tail end doesn’t overcome the inefficiencies we get on the front end,” said Adkins.

Still for those who have the right soil types to utilize SDI, Adkins said that it is a good system.

“There are parts of the world, because of water use efficiency and lack of water, they’ve taken down pivots and put in subsurface drip, but I don’t see that happening here. We get enough recharge that it’s not really an issue. It has its place, but it’s not a silver bullet,” said Adkins.