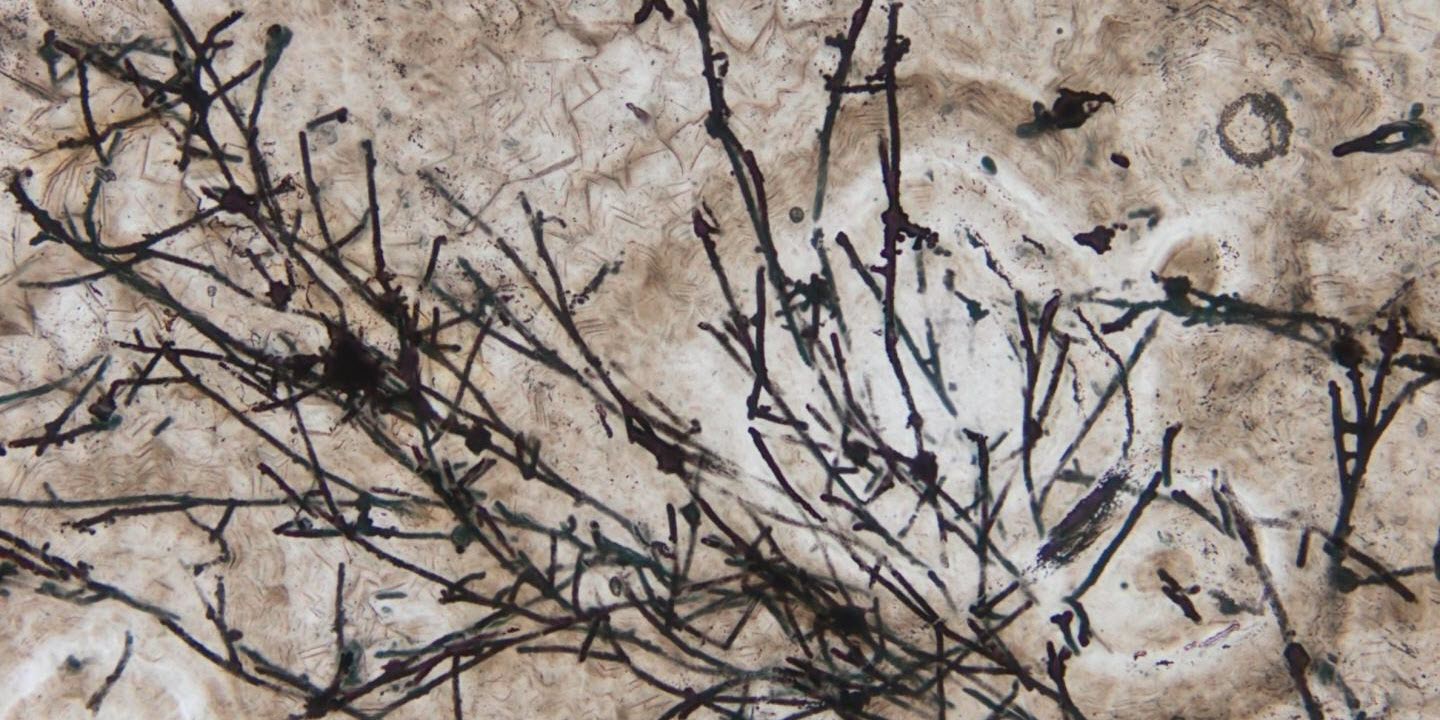 Microscopic image of the fungus-like filamentous microfossils.
Andrew Czaja of University of Cincinnati

When you think of fungi, what comes to mind may be a crucial ingredient in a recipe or their amazing ability to break down dead organic matter into vital nutrients. But new research by Shuhai Xiao, a professor of geosciences with the Virginia Tech College of Science, and Tian Gan, a visiting PhD student in the Xiao lab, highlights yet another important role that fungi have played throughout the Earth's history: helping the planet recover from an ice age.

A team of scientists from Virginia Tech, the Chinese Academy of Sciences, Guizhou Education University, and University of Cincinnati has discovered the remains of a fungi-like microfossil that emerged at the end of an ice age some 635 million years ago. It is the oldest terrestrial fossil ever found. To put it into perspective, this microfossil predates the oldest dinosaurs about three times over.

Their findings were published in Nature Communications on Jan. 28.

But against all odds, Gan found a few long, thread-like filaments—one of the key characteristics of fungi.

"It was an accidental discovery," said Gan. "At that moment, we realized that this could be the fossil that scientists have been looking for a long time. If our interpretation is correct, it will be helpful for understanding the paleoclimate change and early life evolution."

This discovery is key for understanding multiple turning points throughout Earth's history: the Ediacaran period and the terrestrialization of fungi.

When the Ediacaran period began, the planet was recovering from a catastrophic ice age, also known as the "snowball Earth." At that time, ocean surfaces were frozen to a depth of more than a kilometer and it was an incredibly harsh environment for virtually any living organism, except for some microscopic life that managed to thrive. Scientists have long wondered how life ever returned to normalcy—and how the biosphere was able to grow larger and more complex than ever before.

With this new fossil in hand, Tian and Xiao are certain that these microscopic, low profile cave dwellers played numerous roles in the reconditioning of the terrestrial environment in the Ediacaran time. One role involved their formidable digestive system.

Fungi have a rather unique digestive system that plays an even greater role in the cycling of vital nutrients. Using enzymes secreted into the environment, terrestrial fungi can chemically break down rocks and other tough organic matter, which can then be recycled and exported into the ocean.

"Fungi have a mutualistic relationship with the roots of plants, which helps them mobilize minerals, such as phosphorus. Because of their connection to terrestrial plants and important nutritional cycles, terrestrial fungi have a driving influence on biochemical weathering, the global biogeochemical cycle, and ecological interactions," said Gan.

Although previous evidence stated that terrestrial plants and fungi formed a symbiotic relationship around 400 million years ago, this new discovery has recalibrated the timeline of when these two kingdoms colonized the land.

"The question used to be: 'Were there fungi in the terrestrial realm before the rise of terrestrial plants'," said Xiao, an affiliated faculty member of the Fralin Life Sciences Institute and the Global Change Center. "And I think our study suggests yes. Our fungus-like fossil is 240 million years older than the previous record. This is, thus far, the oldest record of terrestrial fungi."

Now, new questions have arisen. Since the fossilized filaments were accompanied by other fossils, Gan will set out to explore their past relationships.

"One of my goals is to constrain the phylogenetic affinities of these other types of fossils that are associated with the fungal fossils," said Gan.

Xiao is thrilled to tackle the environmental aspects of these microorganism. Sixty years ago, few believed that microorganisms, like bacteria and fungi, could be preserved as fossils. Now that Xiao has seen them with his very eyes, he plans to learn more about how they have been virtually frozen in time.

"It is always important to understand the organisms in the environmental context," said Xiao. "We have a general idea that they lived in small cavities in dolostone rocks. But little is known about how exactly they lived and how they were preserved. Why can something like fungi, which have no bones or shells, be preserved in the fossil record?"

However, it can't be said for sure if this fossil is a definitive fungus. Although there is a fair amount of evidence behind it, the investigation into these microfossils is ongoing.

"We would like to leave things open for other possibilities, as a part of our scientific inquiry," said Xiao. "The best way to put it is that perhaps we have not disapproved that they are fungi, but they are the best interpretation that we have at the moment."

Three distinct groups and labs at Virginia Tech were crucial for the identification and timestamping of this fossil. The Confocal Laser Scanning and Microscopy lab at the Fralin Life Sciences Institute helped Tian and Xiao perform initial analysis that prompted further investigation at the University of Cincinnati.

The Department of Biological Sciences' Massey Herbarium, which houses over 115,000 specimens of vascular plants, fungi, bryophytes, and lichens, provided modern fungal specimens for comparison with the fossils.

The team called in technicians to conduct geochemical analysis using Secondary Ion Mass Spectrometry, which ionize nanomoles of material from small areas that are a fraction the thickness of a hair strand, to analyze the isotopic abundance of sulfur-32 and sulfur-34 in order to understand the fossilization environment.

"This wasn't a single person or even a single lab that did this work," said Xiao.

Xiao also emphasized the importance of interdisciplinary research in this study and many others.

"It's very important to encourage the next generation of scientists to be trained in an interdisciplinary light because new discoveries always happen at the interface of different fields," said Xiao.

- This press release was originally published on the Virginia Tech Daily. It has been edited for style