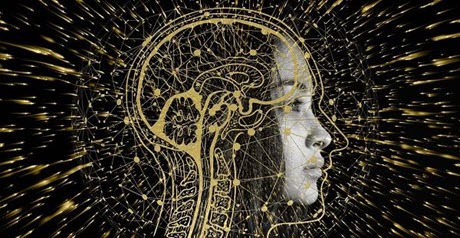 Two subnetworks are altered during the evolution of AD.Credit: Gerd AltmanFrom the detection of functional brain changes that occur during Alzheimer's Disease (AD), a research team from the Complutense University of Madrid (UCM) has located a set of biomarkers that could predict which patients with mild cognitive impairment (MCI) have a higher risk of developing dementia.

"In this work we find that two subnets, in theta and beta frequency bands, which involve fronto-temporal and fronto-occipital regions, are altered during the evolution of Alzheimer's Disease," says Maria Eugenia López García, researcher from the Cognitive Neuroscience group of the UCM and one of the authors of the study.

The research, published in Brain, takes hypersynchronization—increased connectivity between brain regions—as the main axis of changes and magnetoencephalography (MEG) as the tool to detect it.

Thus, it has been shown that patients with MCI who subsequently develop AD show an increase in synchrony but, as dementia develops, this synchronization decreases as a symptom of cortical network dysfunction.

In addition to the UCM Faculty of Psychology, the San Carlos Clinic hospital, the Laboratory of Cognitive and Computational Neuroscience (UCM-UPM) of the Centre for Biomedical Technology, the University of the Balearic Islands and the University of La Laguna (Tenerife) also participate in the project.

MCI is an intermediate phase between what is considered normal aging and dementia, with a rate of 15 percent of patients per year moving from this stage to Alzheimer's.

Therefore, the early diagnosis of MCI, and especially the distinction of patients with MCI who will end up suffering from AD "would help to diagnose and establish a prognosis and make a system for evaluating new pharmacological or non-pharmacological interventions available," says López Garcia.

To carry out this study, the researchers recruited 54 patients with MCI for three years (from an initial sample of 145) who were monitored every six months for three years, and magnetoencephalography records were implemented to measure the magnetic fields that our brain generates both at the beginning (pre phase) and at the end of the study (post phase).

Techniques for estimating brain synchronization were applied to these records: these allow us to determine the way in which different brain regions communicate with each other. At the end of the study, 27 patients remained as MCI (stable MCI, MCIs) and the other half converted to Alzheimer's (MCI converters, MCIc). The model developed in this study had a success rate of 96.2 percent.

The World Health Organization (WHO) estimates that 35.6 million people currently live with dementia, understood as any neurodegenerative disease associated with age. Predictions suggest that the number of people affected will double by 2030 and triple by 2050, with AD being the most prevalent.

"Having this early and non-invasive biomarker can help people to understand this terrible disease. We as researchers have the objective of being useful and being able to make discoveries that can help improve our knowledge of this complex disease," concludes López García. Along with her, the investigators Sandra Pusil, María Eugenia López, Pablo Cuesta, Ricardo Bruña, Ernesto Pereda, and Fernando Maestú were part of this research team.