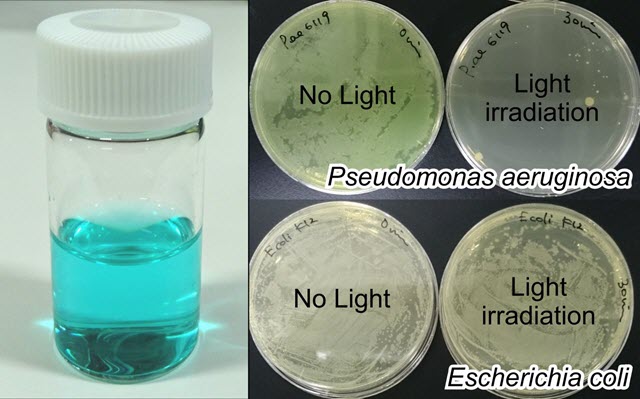 Nagoya University researchers and colleagues in Japan have demonstrated a new strategy in fighting antibiotics resistance: the use of artificial haem proteins as a Trojan horse to selectively deliver antimicrobials to target bacteria, enabling their specific and effective sterilization. The technique killed 99.9 percent of Pseudomonas aeruginosa, a potentially deadly, antibiotic-resistant bacterium present in hospitals. This image shows a solution of the extracellular heme acquisition system protein A (HasA) with gallium phthalocyanine (left) and the results of sterilization of Pseudomonas aeruginosa and Escherichia coli treated with HasA-bound gallium phthalocyanine by irradiation with near-infrared light (Right).Credit: Osami Shoji

Pseudomonas aeruginosa is a dangerous bacterium that causes infections in hospital settings and in people with weakened immune systems. It can cause blood infections and pneumonia, while severe infections can be deadly. Highly resistant to antibiotic treatment, P. aeruginosa is one of the most critical pathogens urgently requiring alternative treatment strategies, according to the World Health Organization.

This bacterium is one of many that have evolved a system that allows them to acquire difficult-to-access iron from the human body. Iron is essential for bacterial growth and survival, but in humans, most of it is held up within the 'heme' complex of hemoglobin. To get hold of it, P. aeruginosa and other bacteria secrete a protein, called HasA, which latches onto heme in the blood. This complex is recognized by a membrane receptor on the bacterium called HasR, permitting heme entry into the bacterial cell, while HasA is recycled to pick up more heme.

Bioinorganic chemist Osami Shoji of Nagoya University and collaborators have found a way to hijack this 'heme acquisition system' for drug delivery. They developed a powder formed of HasA and the pigment gallium phthalocyanine (GaPc), which, when applied to a culture of P. aeruginosa, was consumed by the bacteria.

"When the pigment is exposed to near-infrared light, harmful reactive oxygen species are generated inside the bacterial cells," explains Shoji. When tested, over 99.99 percent of the bacteria were killed following treatment with one micromolar of HasA with GaPc and 10 minutes of irradiation.

The strategy also worked on other bacteria with the HasR receptor on their membranes, but not on ones without it.

The heme acquisition system is so essential to these bacteria's survival that it is not expected to change, making it unlikely the bacteria will develop resistance to this drug strategy, the researchers believe.

"Our findings support the use of artificial heme proteins as a Trojan horse to selectively deliver antimicrobials to target bacteria, enabling their specific and effective sterilization, irrespective of antibiotic resistance," the team reports in their study.