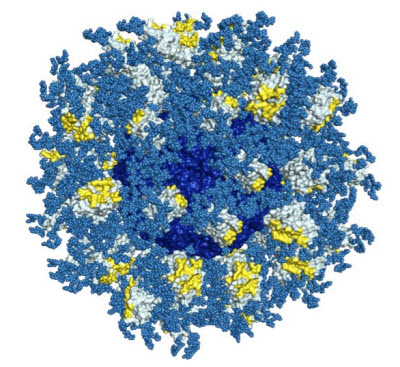 The new work shows the immune system can be prompted to mimic and accelerate a rare natural process during which antibodies slowly evolve to become better and better at targeting the constantly mutating HIV virus. Shown here is the molecule eOD-GT8 60mer, used in the team’s "reductionist strategy."Image courtesy of The Scripps Research InstituteLA JOLLA, CA – September 8, 2016 – A series of new studies led by scientists at The Scripps Research Institute (TSRI) and the International AIDS Vaccine Initiative (IAVI) describe a potential vaccination strategy to jump-start the selection and evolution of broadly effective antibodies to prevent HIV infection. The researchers plan to test this strategy in an upcoming human clinical trial.

The new studies, published September 8, 2016, in the journals Cell and Science, showed the immune system can be prompted to mimic and accelerate a rare natural process during which antibodies slowly evolve to become better and better at targeting the constantly mutating HIV virus.

“Although we still have a long way to go, we’re making really good progress toward a human vaccine,” said William Schief, professor at TSRI and director of vaccine design for IAVI’s Neutralizing Antibody Center (NAC) at TSRI, whose lab developed many of the vaccine proteins tested in these studies.

Schief co-led several of the new studies with TSRI Professor David Nemazee; Dennis Burton, James & Jessie Minor chair of the TSRI Department of Immunology and Microbial Science and scientific director of the IAVI NAC and the National Institutes of Health (NIH) Center for HIV/AIDS Vaccine Immunology and Immunogen Discovery (CHAVI-ID); and Ian Wilson, Hansen Professor of Structural Biology and chair of the Department of Integrative Structural and Computational Biology at TSRI.

One strategy to accomplish this, which scientists at TSRI have dubbed the “reductionist” strategy, is to find which antibody mutations are most important for making them effective against HIV, then to “prime” the immune system to start making antibody precursors. From there, scientists hope to prompt one important mutation after another with a series of different “booster” shots, deliberately building up a bnAb one step at a time.

In a recent study in the journal PLOS Pathogens, the scientists created 3D maps of a structure on HIV known as the CD4 binding site. If antibodies successfully attack this site, scientists believe, most strains of HIV could be crippled. The researchers also created high-resolution maps of bnAbs that could bind to the CD4 binding site.

“This is one of the most complete blueprints we’ve had for this target,” said Jean-Philippe Julien, a research associate in Wilson’s lab at the time of the study, who served as co-first author of the study with TSRI research associate Joseph Jardine, IAVI Research Scientist Devin Sok and Bryan Briney, assistant professor of immunology at TSRI.

The scientists then studied stripped-down versions of the bnAbs to see exactly which components were important in targeting the CD4 binding site.

With the results from the PLOS Pathogens study, the researchers finally had a guide to which mutations were the most important. They also had a better idea of which antibody-eliciting molecules, called immunogens, could be given in booster shots to trigger the right mutations at the right time.

“We’re figuring how to boost antibodies to the next step—how to keep walking them along the path to increased breadth and potency after we get them started with a priming shot,” said Jardine.

This finding set the stage for the three new studies. For the first one, published in Cell, researchers tested a priming immunogen, followed by a series of booster immunogens from the Schief lab. The immunogens were tested in a mouse model, developed by the Nemazee lab, which was engineered to have the genes (the raw materials) to make antibodies with the right mutations to target the CD4 binding site.

The team found that the elicited antibodies more closely resembled mature antibodies. The sequence of immunogens had done their job.

“The study showed that the immunogens are working,” said Nemazee. “They mutate the antibody-producing B cells in the right direction.”

“The elicited antibodies share many genetic features with mature bnAbs and have the ability to neutralize one native HIV isolate as well as multiple other HIV isolates that we modified slightly to make them easier to neutralize,” added Briney, who served as first author of the study with Sok, Jardine, IAVI, and TSRI staff scientist Daniel Kulp and TSRI Research Assistant Patrick Skog. “We will probably need additional booster immunogens to elicit antibodies that can broadly neutralize native HIV isolates, but our results suggest we are on the right track.”

In the second Cell study, led by John R. Mascola at the NIH’s National Institute of Allergy and Infectious Disease (NIAID) Vaccine Research Center and Frederick W. Alt, a Howard Hughes Medical Institute (HHMI) researcher at Boston Children’s Hospital and Harvard Medical School, along with TSRI co-authors, took the reductionist approach a step further, showing that it could induce antibodies in mouse models with immune systems that can create an even wider range of antibodies—more similar to the human immune system.

Results from the Science study further supported the reductionist vaccine approach. For the study, the researchers took on an even bigger challenge—to “prime” antibodies in a mouse model with a human-like immune system developed by Kymab Ltd, a UK-based company.

The Kymab mouse model’s more complicated immune system made it more difficult for a vaccine protein to find and activate the "precursor" cells that have potential to produce bnAbs against the CD4 binding site. In fact, the researchers estimated that each Kymab mouse contained only one such precursor cell on average—with some mice containing none—among approximately 75 million antibody-producing cells.

Despite this "needle-in-a-haystack" challenge, scientists found that their vaccine priming protein activated the appropriate antibody precursors in one-third to one-half of mice tested, suggesting this feat would also be possible in humans, where the targeted precursor cells are more plentiful. “This seems to be a much higher bar than we will face in humans,” Schief said.

“The reductionist vaccine approach we’re undertaking will hopefully not only lead to an HIV vaccine, but also could potentially be applied to other challenging vaccine targets,” said Sok, who served as co-first author of the Science study with Briney, Jardine and Kulp.

IAVI and partners are planning for a clinical trial for next year to further develop and test whether the reductionist vaccine strategy—starting with activating the right precursors—will work in humans. If successful, the next step will be to test their booster immunogens.