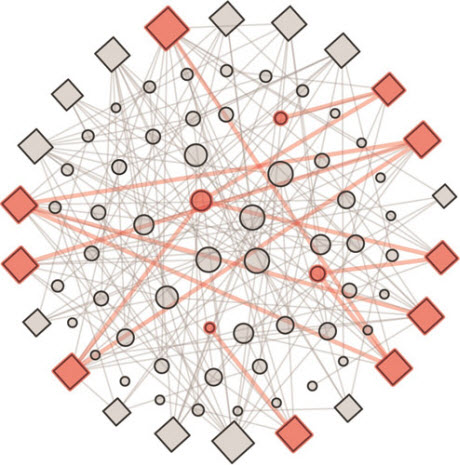 This image represents synthetic lethal wiring of a cancer cell, with previously known interactions in red and newly discovered interactions in gray.Image courtesy of the University of California San Diego School of MedicineIn an effort to expand the number of cancer gene mutations that can be specifically targeted with personalized therapies, researchers at University of California San Diego School of Medicine and Moores Cancer Center looked for combinations of mutated genes and drugs that together kill cancer cells. Such combinations are expected to kill cancer cells, which have mutations, but not healthy cells, which do not. The study, published July 21 in Molecular Cell, uncovered 172 new combinations that could form the basis for future cancer therapies.

“Oncologists here at Moores Cancer Center at UC San Diego Health and elsewhere can often personalize cancer therapy based on an individual patient’s unique cancer mutations,” said senior author Trey Ideker, PhD, professor of genetics and bioengineering at UC San Diego School of Medicine and Jacobs School of Engineering. “But the vast majority of mutations are not actionable—that is, knowing a patient has a particular mutation doesn’t mean there’s an available therapy that targets it. The goal of this study was to expand the number of mutations we can pair with a precision therapy.”

Most cancers have gene mutations that do one of two things—promote cell growth or prevent cell death. The first type is the target of many therapies, which inhibit cell growth. But it’s much harder to develop therapies that restore malfunctioning genes that should be triggering cell death in abnormal cells, known as tumor-suppressor genes.

Rather than target a tumor-suppressor gene directly, Ideker and team took the approach of identifying genetic interactions between a tumor suppressor gene and another gene, such that simultaneous disruption of both genes selectively kills cancer cells.

The researchers first used yeast to quickly and cheaply screen 169,000 interactions between yeast versions of human tumor-suppressor genes and genes that can be inhibited with drugs, sometimes called “druggable” targets. To do this, they deleted each gene one at a time, in combination with another mutation. Those experiments whittled down the best combinations—those lethal to the yeast cells—to a few thousand.

Next the team prioritized 21 drugs for which the yeast druggable targets were involved in the greatest number of cell-lethal interactions. They tested these drugs one at a time for lethal interaction with 112 different tumor-suppressor gene mutations in human cancer cells growing in the lab.

The researchers ended up with 172 drug-gene mutation combinations that successfully killed both yeast and human cancer cells. Of these combinations, 158 had not been previously discovered.

Here’s one example of how this information might be useful for doctors and patients: Irinotecan is a drug only indicated by the FDA for use in colon cancer. But this study suggests that this class of drugs should be evaluated for efficacy in any tumor with a mutation that inhibits RAD17, a tumor-suppressor gene that normally helps cells fix damaged DNA.

The next steps will be to test these combinations in more human cancer cell types and eventually in mouse models. But 172 combinations is a lot, more than a single lab can test, the researchers say. They hope other research teams will also take their list and further test each combination in a variety of conditions. To help spread this information to scientists around the world, all of the data from this study has been made freely available on NDEx, a new network data-sharing resource developed by Ideker and UC San Diego School of Medicine data scientist Dexter Pratt.

“We’ve created an important translational research resource for other scientists and oncologists,” said co-first author John Paul Shen, MD, clinical instructor and postdoctoral fellow at UC San Diego School of Medicine and Moores Cancer Center. “And since many of the cancer-killing interactions we discovered involve already FDA-approved drugs, it may mean they could reach clinical translation rapidly. If these results are validated in subsequent testing, in the future an oncologist will have many more options for precision cancer therapy.”

Disclosure: Sobol is a scientific consultant for Trevigen, Inc.