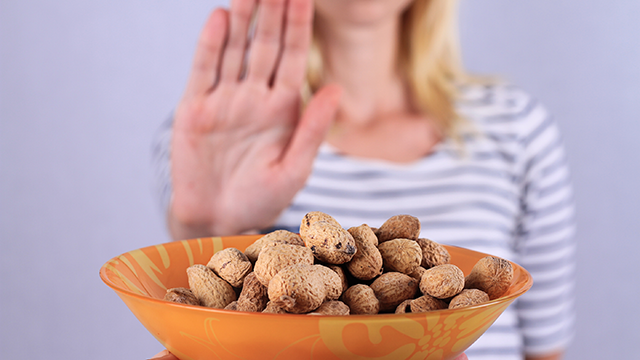 Mount Sinai researchers have identified six genes that activate hundreds of other genes in children experiencing severe allergic reactions to peanuts. This is the first study in human trials to identify genes driving acute peanut allergic reactions using a double-blind placebo-controlled approach with comprehensive sequencing of genes expressed before, during, and after they ingested peanut.

The study was also the first to study gene expression in children over the course of their allergic reactions, allowing each subject’s reaction to be compared to their own pre-reaction state, rather than to a control group without peanut allergies. This approach allowed the researchers to accurately detect gene expression changes resulting from the reactions.

The results of the study were be published online in Nature Communications on Tuesday, December 5.

The standard treatment for individuals with peanut allergy includes avoidance of peanuts and prompt care for the allergic reaction. Immunotherapy has demonstrated progress, but it is not effective for all individuals, carries adverse side effects, and has not been approved by the U.S. Food and Drug Administration.

“This study highlights genes and molecular processes that could be targets for new therapies to treat peanut-allergy reactions and could be important  to understanding how peanut allergy works overall,” said the study’s senior author, Supinda Bunyavanich, MD, MPH, associate professor, pediatrics and genetics and genomic sciences at the  Icahn School of Medicine at Mount Sinai. “We still don’t completely understand everything that happens in the body during peanut-allergy reactions. We can use these genes to direct our studies of peanut allergy and hopefully, predict how strongly someone with peanut allergy will react.”

The research team collected blood samples from 40 peanut-allergic children before, during, and after a randomized, double-blind, placebo-controlled oral food challenge. Subjects ingested incremental amounts of peanut at 20-minute intervals until an allergic reaction occurred or a cumulative dose of 1.044 grams of peanut was ingested. In a similar fashion on a different day, the same subjects ingested incremental doses of placebo oat powder; again, blood samples were drawn before, during, and after the challenge. The team then performed comprehensive RNA sequencing on the blood samples followed by computational data analyses to determine what genes and cells were activated and driving these allergic reactions.

“Other studies have looked at genes expressed in people with food allergies and compared them to people who don’t have food allergies,” said Dr. Bunyavanich. “One of the strengths of our study is that we looked at genes expressed over time in children actively reacting to peanut and followed  that person throughout their reaction, which provided a detailed and comprehensive picture of what’s happening on the genetic and molecular level during a peanut-allergy reaction.”

One of the limitations of the study is that it only focused on peanut allergy. Dr. Bunyavanich and the research team plan to conduct future studies targeting other common allergens, such as milk and egg, to address if their findings may be relevant to other types of food allergy.

About the Mount Sinai Health System

The Mount Sinai Health System is New York City’s largest integrated delivery system encompassing seven hospital campuses, a leading medical school, and a vast network of ambulatory practices throughout the greater New York region. Mount Sinai’s vision is to produce the safest care, the highest quality, the highest satisfaction, the best access and the best value of any health system in the nation. The System includes approximately 7,100 primary and specialty care physicians; 10 joint-venture ambulatory surgery centers; more than 140 ambulatory practices throughout the five boroughs of New York City, Westchester, Long Island, and Florida; and 31 affiliated community health centers. Physicians are affiliated with the renowned Icahn School of Medicine at Mount Sinai, which is ranked among the highest in the nation in National Institutes of Health funding per investigator. The Mount Sinai Hospital is ranked No. 18 on U.S. News & World Report’s “Honor Roll” of top U.S. hospitals; it is one of the nation’s top 20 hospitals in Cardiology/Heart Surgery, Diabetes/Endocrinology, Gastroenterology/GI Surgery, Geriatrics, Nephrology, and Neurology/Neurosurgery, and in the top 50 in four other specialties in the 2017-2018 “Best Hospitals” issue. Mount Sinai’s Kravis Children’s Hospital also is ranked in six out of ten pediatric specialties by U.S. News & World Report. The New York Eye and Ear Infirmary of Mount Sinai is ranked 12th nationally for Ophthalmology and 50th for Ear, Nose, and Throat, while Mount Sinai Beth Israel, Mount Sinai St. Luke’s and Mount Sinai West are ranked regionally. For more information, visit http://www.mountsinai.org/, or find Mount Sinai on Facebook, Twitter, and YouTube.