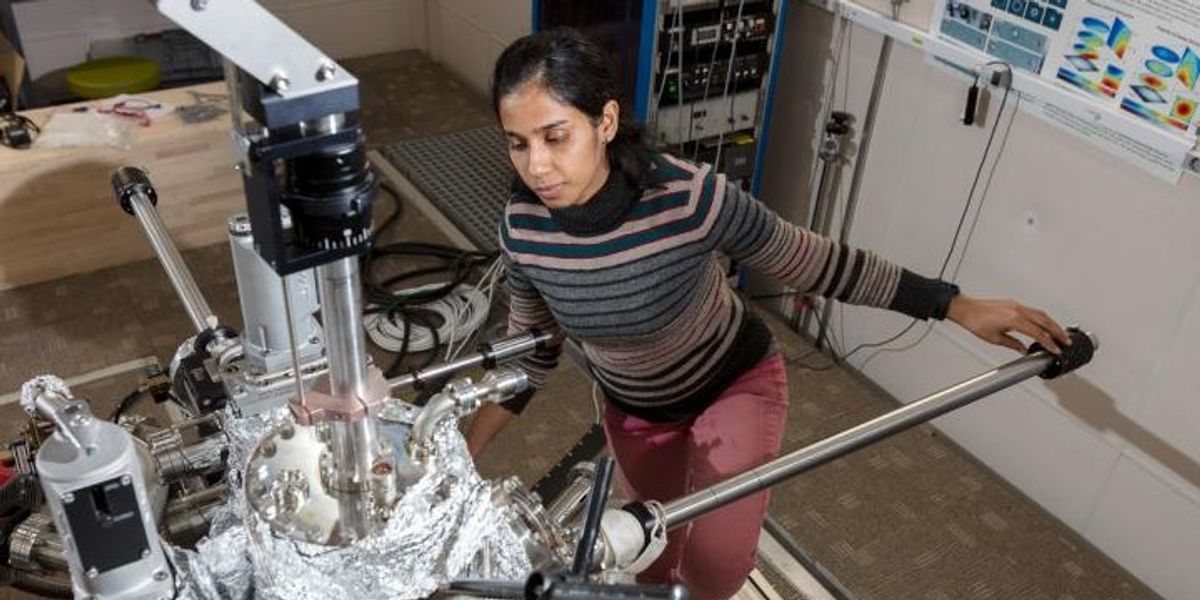 Dr. Aparajita Singha with one of the ESR-enabled STM systems at QNS.
QNS

Researchers at the Institute for Basic Science (IBS) Center for Quantum Nanoscience at Ewha Womans University (QNS) have shown that dysprosium atoms resting on a thin insulating layer of magnesium oxide have magnetic stability over days. In a study published in Nature Communications they have proven that these tiny magnets have extreme robustness against fluctuations in magnetic field and temperature and will flip only when they are bombarded with high energy electrons through the STM-tip.

Using these ultrastable and yet switchable single-atom magnets, the team has shown atomic scale control of the magnetic field within artificially built quantum architectures. "The atomic scale tunability and precision engineering of magnetic fields shown in this work adds a new paradigm for quantum logic devices and quantum computation," says Dr. Aparajita Singha who conducted the research as a postdoc at QNS and is now a group leader at the Max Planck Institute for Solid State Research.

Although magnetism arises at the level of single atoms, also called unpaired spins, small atomic clusters are generally magnetically very unstable without careful control of their surroundings. Understanding magnetic properties at such small scales is a fundamental physics problem, which has become technically very important for creating qubits—the building blocks for quantum computation.

Magnetism at such small scales can be studied and controlled using quantum tunneling through sharp electrode probes in a Scanning Tunneling Microscope (STM). The fingerprint of these atomic spins can be measured using single-atom electron spin resonance (ESR). The research team at QNS combined the use of these powerful techniques to find the right conditions for achieving the long-sought robust single-atom magnet.

"Creating the smallest ultrastable magnets was far from a small effort. It needed operating at the limits of measurement techniques and finding just the right conditions. On a double layer MgO substrate, the Dy atom is almost isolated but still feels enough directionality to maintain a defined polarity over days," according to Singha.

To be able to freeze single atoms and measure their minuscule signals, the team created an extreme physical environment, including: (a) temperatures thousands of times lower than room temperature, at which atoms stop drifting on surfaces, (b) vacuum stronger than empty space, so that atoms do not get contaminated by impurities that would otherwise bias the results, and (c) ultraclean crystalline surfaces with almost nothing on top other than the desired single atoms. As for the tool itself, they picked up single Fe (iron) atoms one-by-one on the STM-tip until achieving enough signal-to-noise ratio in ESR, even in absence of any external magnetic field (generally 30-50 atoms). Since the electronic states of an ultrastable Dy-atom magnets (4f orbitals) are too shielded for STM measurements, the researchers measured its magnetic field projection on a more easily measurable sensor Fe-atom, placed at defined locations on the same surface. Using the same STM-tip, they also arranged single Dy-atom magnets at different lattice locations of the crystalline substrate around the sensor Fe-atom. Deliberate flipping of the individual Dy-atom magnets changed the magnetic field at the sensor Fe-atom location with precise discreteness, which was then measured to be stable over days using ESR.

Switchable ultrastable single-atom magnets placed at atomically precise locations provide a toolbox for extremely local but precise control of magnetic fields. Once the magnetic state is set, it is maintained automatically without any need of huge and expensive external magnets. Dr. Singha concluded that, "the atomic scale tunability of magnetic field is a powerful control tool for future surface-based quantum circuits."

- This press release was provided by the Institute for Basic Science