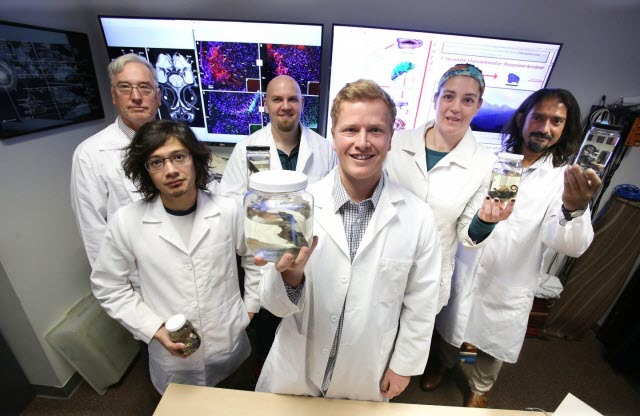 Researchers from The University of Texas at El Paso have given science one more way to study a wide range of creatures, particularly those threatened by global climate change.Photo credit: UTEP Communications

By figuring out how to preserve specimens in the remote locations in which they are found—locations almost completely opposite those of a controlled laboratory or 21st century urban area—researchers from the University of Texas at El Paso have given science one more way to study a wide range of creatures, particularly those threatened by global climate change.

Saving a specimen in alcohol is done all the time, but that process dehydrates the brain and makes it unusable for some scientific investigations that may lead to medical discoveries that can cure disease. A better way of preserving that organ is using formaldehyde, but that requires specialized laboratory equipment, electronics, pumps that push the preservative through the specimen's circulatory system, a fume hood to flush away toxic fumes, and power for it all.

None of that is available when you're on a mountain looking at a rare species and have no idea whether you'll ever see it again, such as chameleon specimens obtained by the UTEP team in the Democratic Republic of the Congo.

"What we did in this study is create a small kit with syringes and some basic solution reagents you can mix up in a bottle and shake for a pretty decent preservative," said Arshad Khan, PhD, assistant professor in biological sciences at UTEP. "You can then go in and anesthetize the animal and set up a little field station to embalm the animal in formaldehyde right there."

"The technique is easy enough that someone like myself who has zero expertise previously in neuroscience or neuroanatomical techniques can learn it very quickly and ... without a whole lot of money," said Daniel Hughes, a PhD student in ecology and evolutionary biology who was the lead author on the paper announcing the UTEP team's discovery.

He and the team hopes that people living in or near remote areas flush with biodiversity can take this preservation technique, use it, and then send the specimens to laboratories equipped with the technologies to do the analysis, which can then be digitized and placed online or sent out for the widest access.

"The results of this project sit at an important intersection between field biology and neurological research," said Paul Gignac, PhD, assistant professor of anatomy at Oklahoma State University and a co-author of the paper. He added that having proved it is not impossible to preserve brain tissue in remote biodiversity hotspots opens up huge possibilities.

The specimens have almost an endless number of uses that can potentially lead to medical discoveries that can cure disease. For example, medical studies of neurotransmitters like dopamine require more frequent and numerous charting of animal brains. A variety of mental disorders and neurodegenerative disorders like Parkinson's disease are all deficiencies in dopamine, so continued investigation into how brains from a wide variety of creatures use this chemical may unlock much-needed remedies.

The Systems Neuroscience Lab team at UTEP spent hundreds of hours carefully poring over the quality of the brain tissue under a microscope to see whether that which was preserved by their bare bones technique was comparable to preservation methods used in a laboratory environment equipped with modern technology. And it was.