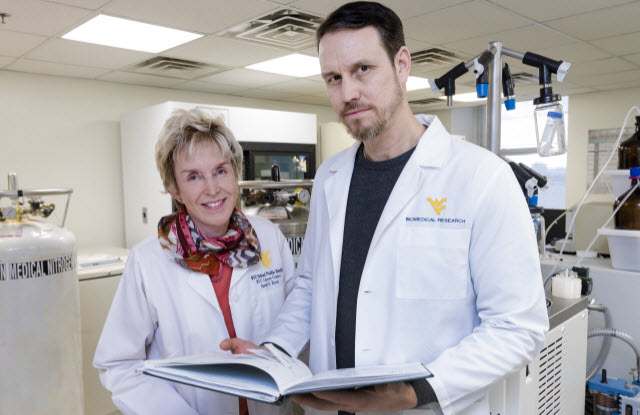 Sarah Knox, with the WVU School of Public Health, and Timothy Eubank from the WVU School of Medicine, have teamed up to study how bioelectric signaling between cells influences cancer progression. Their work may lead to novel ways to stunt tumor growth, by adjusting the difference in electrical charges within and outside of cancer cells.Photo courtesy of West Virginia University

Although breast cancer mortality has declined in the U.S., it is still the most frequently diagnosed cancer and the leading cause of cancer deaths in women under 60 years old.

“This suggests there are still some important mechanisms influencing risk, etiology, and progression that remain unknown to us,” said Sarah Knox, an epidemiologist at the West Virginia University School of Public Health.

She and tumor immunologist Timothy Eubank from the WVU School of Medicine are partnering to investigate one such mechanism that affects the interaction between cells and the microenvironment surrounding them.

“We know from years of research that many things in the body influence gene expression,” Knox said.

Whether someone has a “cancer gene” mutation, for instance, is only one variable. Other variables, such as the person’s diet and exposure to toxins, can influence whether a cancer gene gets “turned on” or a tumor-suppression gene is “turned off.”

Knox explained that humans accumulate mutations every day, but our bodies have defense mechanisms to deal with them. Repair mechanisms in our DNA correct mutations, our immune system seeks out and destroys cancer cells, and our cells are programmed to die when they stop working right.

“Cancer occurs when the anti-cancer defenses cease to function successfully because they are overburdened, old or dysfunctional for some other reason,” Knox said. “If we didn’t have all these defense mechanisms, we would have died out like the dinosaurs and never evolved to our present state.”

Knox and Eubank are collaborating with Tufts University’s Michael Levin, who has induced tumors without resorting to cancer-causing genes or toxic substances by changing cells’ voltage potential.

Voltage potential refers to the difference between a cell’s inner and outer electrical charges. Under normal circumstances, the interior of a healthy, resting cell carries a negative charge while the area outside the cell membrane carries a positive charge.

“If you take a cancer-causing gene, put it into a cell and increase the voltage potential between the inside and outside of the cell, you can prevent the tumor,” Knox said.

In fact, a drop in voltage potential can predict tumor formation because it precedes a cell’s unhealthy proliferation.

This is preliminary work that must be repeated and validated, so the next step will be to test whether tumor growth can be regulated by adjusting voltage potential.

“Our goal is to regulate the activities of normal mammary tissue and a tumor environment by introducing proteins that disrupt or rescue cell membrane potential to demonstrate that this activity may drive or reverse tumor progression,” Eubank said. “Once we validate the mechanism, new therapeutic opportunities can be developed to intervene in patients.”

If altering cells’ voltage potential can stave off cancer in humans, then biophysical treatments that don’t involve chemicals, such as light-activated cells, may prove to be a useful, less toxic addition to current therapies for multiple cancer types.

By changing cells’ electrical frequency, these tools may provide a way to hit a “reset” button on the body’s own healing systems so they can target tumors.

“We’re a long way out,” Knox said, “but it’s a different approach to cancer than what we’ve been taking.”