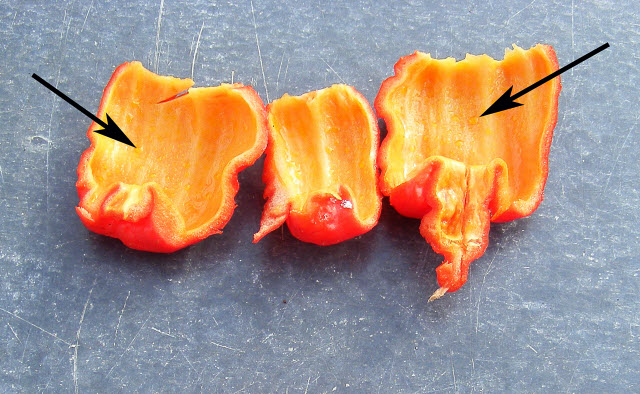 Capsaicinoid vesicles are seen on the interior wall of a Trinidad Moruga Scorpion chile pepper.Courtesy photo

Researchers at New Mexico State University’s Chile Pepper Institute have discovered that super-hot chile peppers, those with more than one million Scoville Heat Units, are built differently than other peppers. Unlike regular chile peppers, super-hot peppers make the most of the interior space they have available, which can lead to some serious heat.

“What we were interested in finding was why super-hot chile peppers are able to get that hot,” said Paul Bosland, an NMSU Regents Professor and director of the university’s Chile Pepper Institute.

According to Bosland, it has been known that a chile pepper’s heat comes from the chemical compound capsaicin, and that capsaicinoids are found in yellow-colored sacs called vesicles. In most chile peppers, the capsaicinoid vesicles are attached to the fruit’s placenta, where the seeds are located. 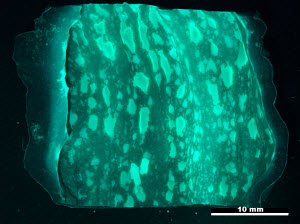 Capsaicinoid vesicles are seen under fluorescence on the interior wall of a Trinidad Moruga Scorpion chile pepper.Courtesy photoWith super-hot peppers, those sacs are also found on the fruit wall, and in larger quantities. This gives the pepper far more surface area to pack in capsaicinoid vesicles and to turn up the heat. Peter Cooke, with the NMSU Core University Research Resources Laboratory, was able to make the capsaicinoid sacs fluoresce in both jalapeno peppers and Trinidad Moruga Scorpion peppers and then examined the fruit with university’s electron microscope.

“There, you could see that the jalapeno was only fluorescing on the placenta,” Bosland said, “while the super-hots would fluoresce all over the wall. It’s a very dramatic image to see. Right now, we’re assuming this is a genetic mutation in super-hots because we’ve never seen this in wild chile peppers.”

Bosland said this information can help plant breeders in selecting for new chile pepper varieties that could potentially lead to chile peppers with double the heat of today’s hottest.

“We’ll probably see someone get a three million or four million Scoville Heat Unit fruit down the road,” he said. “This could be particularly helpful for the extraction industry, companies that extract those heat compounds for use in medicine.”