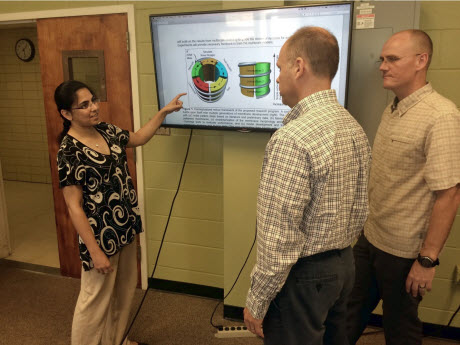 Sapna Sarupria (left) talks to Scott Husson (middle) and David Ladner about the research they are doing on membranes that could help provide clean water at a time when one in six people around the globe still do not have access to it.Photo courtesy of Clemson UniversityCLEMSON — A research team in Clemson University’s College of Engineering and Science has received $970,000 to create new technology that could play a key role in providing safe water to a planet where one in six people still do not have access to it.

Researchers will work toward developing the world’s first computer models capable of testing the chemical coatings and geometric designs on membranes without having to create a prototype in the lab.

If they find the right combination, membranes will be less likely to clog as they filter impurities out of water from lakes, rivers and oceans. It could help lower the cost of water treatment around the world.

Four years of work begins in January and will be led by principal investigator Sapna Sarupria, an assistant professor of chemical and biomolecular engineering. Funding comes from the National Science Foundation.

“This project addresses a grand challenge facing society today: how to make clean water available to a growing population at a low cost,” Sarupria said. “The computer models we develop will lead to leapfrog improvement in membrane filtration technologies.”

Membranes are playing an increasingly important role in water treatment around the world. Water is forced through membranes to filter out impurities that are sometimes even smaller than the width of a human hair.

Over time, bits of organic, inorganic and biological material become caught in the microscopic pores of membranes — a process that engineers call “fouling.” It makes the membranes less productive and is one of the largest costs associated with using them in water treatment.

Researchers expect the computer models they develop will allow them to create a short list of membrane designs that show promise for further testing.

Scott Husson, a co-principal investigator on the project, said the only way to test membranes now is to physically create prototypes, which can be expensive and time-consuming.

“Think of going into the lab and screening all available options,” said Husson, professor of chemical and biomolecular engineering. “I could spend the rest of my career doing that and never get close. Having a new tool that could do that is really exciting.”

David Ladner, also a co-principal investigator, said that evaluating five prototype membranes could take as long as five months with current methods, but that the computer models will make a big difference.

“Toward the end of the project when all the models are running, we should be able to very quickly test lots of different patterns,” said Ladner, an assistant professor of environmental engineering and Earth sciences. “I would estimate a 100-fold increase in the types of patterns you could evaluate.”

Also collaborating on the project is Ilenia Battiato, an assistant professor of mechanical engineering, formerly of Clemson and now at San Diego State University.

Tanju Karanfil, associate dean for research and graduate studies, congratulated the team on landing the grant and said that it will be used for important work.

“Clean water is plentiful in developed countries, but not everyone is so fortunate,” he said. “About 750 million people around the globe do not have access to safe water, which is crucial to good health. Lack of clean water claims more lives than war.

“Providing clean water to the world is one of the most important things we can do.”

It’s a challenge not expected to go away anytime soon. Population growth, economic development and climate change have led to concerns that water could become increasingly scarce.

Also as part of the project, the team will look to bridge education and research.

Four PhD students will work on the project and use it as the basis for their dissertations. The team is also planning to start a research project and to create learning modules for undergraduates, while exploring a collaboration with an Upstate elementary school.

Sarpuria said the project as a whole will take her research group in an exciting new direction and could help change lives, especially in countries where clean water is scarce.

“If you can build technologies that are cheaper, then you’re giving them a shot at improving their quality of life,” she said. “I think that’s what it means to invest in research that allows us to get there.”