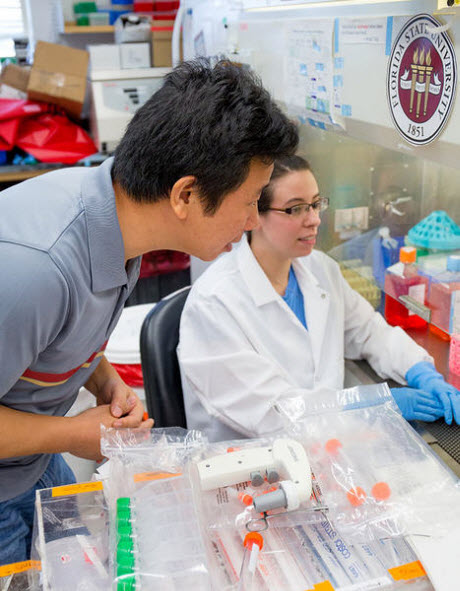 Hengli Tang, professor of biological science at Florida State, and graduate student Sarah Ogden are working to find answers about the mysterious Zika virus.Florida State UniversityFlorida State University researchers have made a major breakthrough in the quest to learn whether the Zika virus is linked to birth defects with the discovery that the virus is directly targeting brain development cells and stunting their growth.

This is the first major finding by scientists that shows that these critical cells are a target of the virus and also negatively affected by it. Hengli Tang, professor of biological science at FSU, is a lead author of the study published March 4 in the academic journal Cell Stem Cell.

Though the Zika virus was discovered in 1947, there is very little known about how it works and its potential health implications, especially among pregnant women. Anecdotal evidence has suggested a link to microcephaly, a condition where a child is born with an abnormally small head as a result of incomplete brain development.

Tang, along with researchers at Johns Hopkins University and Emory University, found that the virus directly targets a cell type called human embryonic cortical neural progenitors in as little as three days after being exposed to the virus. They also discovered that these infected cells replicate the Zika virus, posing potential treatment problems, and that the virus is directly interfering with cell growth and function. Some of the cells died after being infected.

“Potentially, this could explain why there is a link to microcephaly, but there is a lot more work needed to show the direct causal effect,” said Guo-Li Ming, professor of neurology at Johns Hopkins University.

The research took a remarkably quick path. Because of the public health implications, researchers worldwide have been working around the clock to study how the virus works and its potential targets.

According to the World Health Organization, 52 countries have reported local transmission of the Zika virus.

About a month ago, a research team led by Johns Hopkins University neurology Professors Hongjun Song and Ming brought neural stem cells to FSU where Tang and his graduate students infected them with the virus and began monitoring them. A few weeks later, they were transported to Emory so scientists there could analyze changes in gene expression caused by the virus.

Tang had been funded by the National Institutes of Health to study the Dengue virus, which is similar to the Zika virus, and was in the unique position of already running a lab equipped to handle and study samples of the virus. Song and Ming, who went to graduate school with Tang, were experts on the neural cells that they believed the virus was targeting.

The three labs will continue to collaborate and also tackle various aspects of the disease separately. Tang is investigating how it enters the cell and then how it specifically disrupts the normal cell processes. Ming is using 3D models of brains to further examine the link between the neural progenitor cells and microcephaly. And Song is investigating why the virus is going after neural progenitor cells as opposed to other cell types.

Many questions still remain about the virus, but this discovery is the pivotal first step.

“It’s significant because we’re literally the first people in the world to know this, to know that this virus can infect these very important cells and interfere with their function,” Tang said. “Research is rewarding in general, but when you have something this timely and this clinically relevant, it’s extra satisfying because we’ll be helping people in the long run.”

The research was funded by Florida State University, the Maryland Stem Cell Research Fund, and the National Institutes of Health.