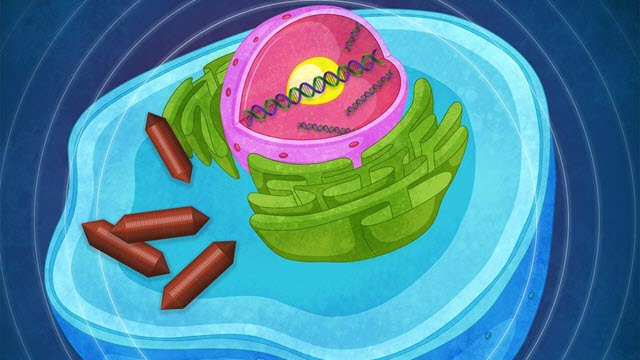 Some of the most important tools in the toolbox of modern cell biologists are special chunks of DNA that act like spies, reporting on the cell's function. The markers, known as reporter genes, allow researchers to get a sense for what cells are doing by watching genetic programs embedded in their DNA turn on and off.

Reporter genes work by encoding proteins that can be seen from outside the cell. One particularly popular reporter gene encodes something called the green fluorescent protein (GFP), which, true to its name, is a protein that glows bright green. So, if a researcher wants to learn more about how cells become neurons, they can insert the GFP gene alongside a neuronal gene into an embryo's DNA. When the embryo's cells turn on the neuron gene, they will also express the GFP gene, and the cells will glow green, making it easy for the researcher to see that the genetic program that encodes neuron formation is active.

As useful as this technique has been, it has a big limitation: Because light does not penetrate well through most living tissue, the GFP gene cannot be used for monitoring the activity of cells deep inside an organism. But now, Caltech's Mikhail Shapiro has a solution. A team consisting of Shapiro, professor of chemical engineering and investigator with the Heritage Medical Research Institute, graduate student Arash Farhadi, and their colleagues, has developed a reporter gene that allows them to see genetic activity using ultrasound, which can penetrate deeply through tissue, instead of light.

They describe the work in a paper in the journal Science.

Besides having buoyancy, the gas vesicles have another useful property: they show up strongly in ultrasound imaging, as Shapiro's lab demonstrated in 2014. If researchers could find a way to engineer a cell to form these nanostructures when a specific genetic program was active, the cells would be highlighted when exposed to ultrasound.

To turn the genes that encode gas vesicle proteins into a reporter gene, Shapiro and Farhadi needed to do something that had never before been done: transplant a genetic program of nine genes from bacteria into mammalian cells, in this case, cells derived from human kidneys (HEK cells).

Doing this was not a straightforward process because bacteria and mammals read the genes in their DNA differently. That means that although Shapiro and Farhadi could insert the bacterial DNA into the cells, those cells would not know what to do with that DNA, similar to how a program written for an Apple computer will not run on a Windows computer.

"The translation machinery is very different in the two kinds of cells," Farhadi says. "One of the biggest differences is that in bacteria it is common to have multiple genes arranged in the DNA such that they are transcribed into one shared piece of RNA, which is then translated into all the corresponding proteins, whereas in eukaryotes, every gene is usually on its own."

Shapiro says the solution came from yet another source of DNA: viruses.

"Viruses also need to trick mammalian cells into expressing a bunch of proteins," Shapiro says. "So we used viral elements to trick the cell into producing multiple genes from a shared piece of RNA." In this way, Farhadi and colleagues combined eight genes together on a single piece of RNA.

However, even after inserting working bacterial DNA into the HEK cells, Shapiro and Farhadi still did not have a complete solution. The cells were making gas vesicle proteins, but gas vesicles were not forming. It turned out that proteins not only needed to be produced, but in the right ratios.

Shapiro likens it to a construction site. A building might be made of wood, glass, and bricks, but if workers show up with mostly windows and only a few bricks, they will not be able to construct a building.

In addition to providing the building materials, some proteins encoded by the gas vesicle genes act like construction machinery—the cranes, bulldozers, et cetera—that are used to make the gas vesicles. If a construction site has 50 cranes but only one bulldozer, the project probably will not get finished. Ratios, again, are key.

"The correct ratios of proteins are programmed into the bacterial gene clusters, but when we put them into the mammalian cells, we have to figure out what those ratios need to be and how to get the mammalian cells to make those correctly," Farhadi says.

Figuring that out, Shapiro and Farhadi say, required a systematic process that took several years. Now that they have the genes working, they say they will be able to use them to study gene expression in tumors, immune cells, neurons, and other cell types in living organisms. With further improvements, they hope biologists around the world will be using ultrasound to peer into model organisms to study cells within their natural biological context, and that doctors may someday use ultrasound to monitor the fate of cell-based therapeutics in patients.

"There has been more than 20 years of work improving fluorescent proteins, and we probably have 20 years of work to improve what we've developed, but this is a key proof of concept," Shapiro says.