PROVIDENCE, RI — A team of Brown University researchers has found a way to double the toughness of a ceramic material used to make solid-state lithium ion batteries. The strategy, described in the journal Matter, could be useful in bringing solid-state batteries to the mass market.

"There's huge interest in replacing the liquid electrolytes in current batteries with ceramic materials because they're safer and can provide higher energy density," said Christos Athanasiou, a postdoctoral researcher in Brown's School of Engineering and lead author of the research. "So far, research on solid electrolytes has focused on optimizing their chemical properties. With this work, we're focusing on the mechanical properties, in the hope of making them safer and more practical for widespread use."

The electrolyte is the barrier between a battery's cathode and anode through which lithium ions flow during charging or discharging. Liquid electrolytes work pretty well—they're found in most batteries in use today—but they have some problems. At high currents, tiny filaments of lithium metal can form inside the electrolytes, which cause batteries to short circuit. And since liquid electrolytes are also highly flammable, those shorts can lead to fires.

Solid ceramic electrolytes aren't flammable, and there's evidence that they can prevent the formation of lithium filaments, which could enable batteries to operate at higher currents. However, ceramics are highly brittle materials that can fracture during the manufacturing process and during use.

For this new study, the researchers wanted to see if infusing a ceramic with graphene—a super-strong carbon-based nanomaterial—could increase the material's fracture toughness (a material's ability to withstand cracking without falling apart) while maintaining the electronic properties needed for electrolyte function. 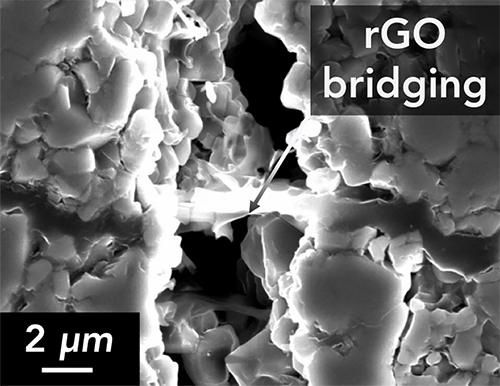 Research shows that reduced graphene oxide (rGO) can help prevent the propagation of cracks in ceramic materials used for battery electrolytes. The findings could be a step toward making solid electrolytes that are tough enough for the mass market.
Sheldon lab, Brown University

Athanasiou worked with Brown engineering professors Brian Sheldon and Nitin Padture, who for years have used nanomaterials to toughen ceramics for use in the aerospace industry. For this work, the researchers made tiny platelets of graphene oxide, mixed them with powder of a ceramic called LATP, and then heated the mixture to form a ceramic-graphene composite.

Mechanical testing of the composite showed a more than two-fold increase in toughness compared to the ceramic alone. "What's happening is that when crack starts in a material, the graphene platelets essentially hold the broken surfaces together so that more energy is required for the crack to run," Athanasiou said.

Experiments also showed that the graphene didn't interfere with the electrical properties of the material. The key was making sure the right amount of graphene was added to the ceramic. Too little graphene wouldn't achieve the toughening effect. Too much would cause the material to become electrically conductive, which is not desired in an electrolyte.

"You want the electrolyte to conduct ions, not electricity," Padture said. "Graphene is a good electrical conductor, so people may think we're shooting ourselves in the foot by putting a conductor in our electrolyte. But if we keep the concentration low enough, we can keep the graphene from conducting, and we still get the structural benefit."

Taken together, the results suggest that nanocomposites could provide a path forward to making safer solid electrolytes with mechanical properties to be used in everyday applications. The group plans to continue working to improve the material, trying nanomaterials other than graphene and different types of ceramic electrolyte.

"To our knowledge, this is the toughest solid electrolyte that anyone has made to date," Sheldon said. "I think what we've shown is that there's a lot of promise in using these composites in battery applications."