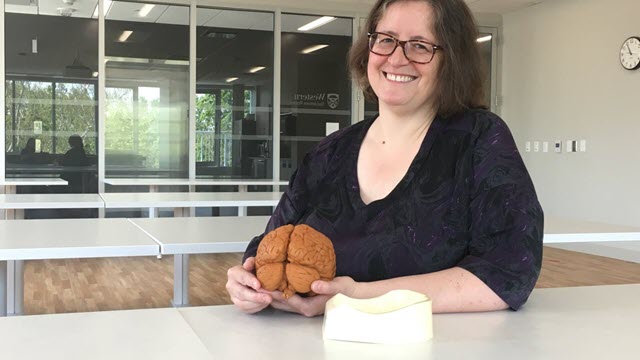 Neuroscientists at Western University's Brain and Mind Institute have confirmed and detailed a rare case of a blind woman able to see objects—but only if in motion.

A team led by neuropsychologist Jody Culham has conducted the most extensive analysis and brain mapping to date of a blind patient, to help understand the remarkable vision of a 48-year-old Scottish woman, Milena Canning.

Canning lost her sight 18 years ago after a respiratory infection and series of strokes. Months after emerging blind from an eight-week coma, she was surprised to see the glint of a sparkly gift bag, like a flash of green lightning.

Then she began to perceive, sporadically, other moving things: her daughter's ponytail bobbing when she walked, but not her daughter's face; rain dripping down a window, but nothing beyond the glass; and water swirling down a drain, but not a tub already full with water.

Glaswegian ophthalmologist Gordon Dutton referred Canning to the Brain and Mind Institute in London, Canada, where tests by Culham's team included functional Magnetic Resonance Imaging (fMRI) to examine the real-time structure and workings of her brain.

They determined Canning has a rare phenomenon called Riddoch syndrome—in which a blind person can consciously see an object if moving but not if stationary.

"She is missing a piece of brain tissue about the size of an apple at the back of her brain—almost her entire occipital lobes, which process vision," says Culham, a professor in the Department of Psychology and Graduate Program in Neuroscience.

"In Milena's case, we think the 'super-highway' for the visual system reached a dead end. But rather than shutting down her whole visual system, she developed some 'back roads' that could bypass the superhighway to bring some vision—especially motion—to other parts of the brain."

During the study, Canning was able to recognize the motion, direction, size, and speed of balls rolled towards her; and to command her hand to open, intercept and grab them at exactly the right time. She could navigate around chairs.

Yet she inconsistently identified an object's color, and was able only half the time to detect whether someone's hand in front of her showed thumb-up or thumb-down.

"This work may be the richest characterization ever conducted of a single patient's visual system," says Culham. "She has shown this very profound recovery of vision, based on her perception of motion."

The research shows the remarkable plasticity of the human brain in finding work-arounds after catastrophic injuries. And it suggests conventional definitions of 'sight' and 'blindness' are fuzzier than previously believed.

For Canning, the research at BMI helps explain more about what she perceives and how her brain is continuing to change. She is able to navigate around chairs, can see a bright-shirted soccer goalie and can see steam rising from her morning cup of coffee, for example.

"I can't see like normal people see or like I used to see. The things I'm seeing are really strange. There is something happening and my brain is trying to rewire itself or trying different pathways," Canning says.

The research is newly published in the journal Neuropsychologia.