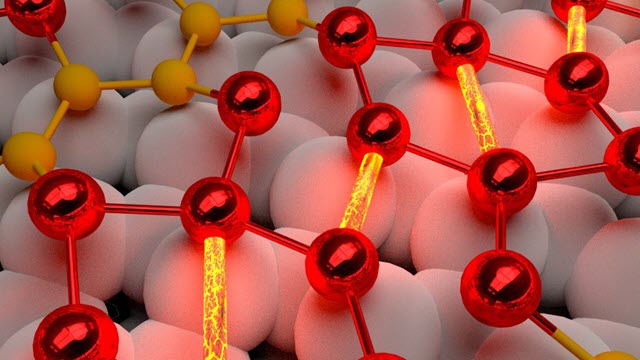 A simulation of indium wire atoms (red) on top of a silicon substrate. The glowing regions highlight where indium bonds have been excited and photoholes have formedCredit: Andreas Lücke

After being excited with the first laser pulse, the atoms' valence electrons—electrons on the outside of an atom that are candidates for helping form chemical bonds—may re-arrange to form new chemical bonds, resulting in new molecules. Because of the speed and scale of these interactions, though, researchers have only hypothesized how this re-arrangement takes place.

In addition to experimental methods, high-performance computing (HPC) has become an increasingly important tool for understanding these atomic-level interactions, verifying experimental observations, and studying electron behavior during a chemical reaction in more detail. A University of Paderborn group led by Dr. Wolf Gero Schmidt has been collaborating with physicists and chemists to complement experiments with computational models.

In order to better understand electrons' behavior during a chemical reaction, Schmidt and his collaborators have been using supercomputing resources at the High-Performance Computing Center Stuttgart (HLRS) to model this phenomenon. "The experimental group at the Fritz Haber Institute came to us about this research, and we had actually already done the simulation," Schmidt said. "In this case, theory was ahead of experiment, as we had made a prediction and the experiment confirmed it."

Last year, Schmidt's group partnered with experimentalists from the University of Duisburg-Essen to excite an atomic-scale system and observe photo-induced phase transitions (PIPTs) in real time. Phase transitions—when a substance changes from one physical state to another, such as water changing to ice—are important in studying and designing materials, as a substance's properties may change wildly depending on the state it is in.

For example, the team found that when excited with a laser pulse, indium-based nanoscale wires would essentially change from an insulator into an electrical conductor. These indium wires, while not necessarily of immediate technological interest for electronic applications, serve as a good test case and a solid basis for verifying simulations with experiments.

This year, the team wanted to take what it had learned about the indium wires previously and study chemical reactions on an even more fundamental level—it wanted to track how the constituent electrons behave after being excited by a laser pulse. "Last year, we published a Nature article that demonstrated the measurement of the atomic movement on this scale," Schmidt said. "We could show how the atoms moved during the chemical reaction. This year, we were even able to monitor the electrons while the reaction took place."

Figuratively speaking, electrons serve as the glue that chemically binds atoms together. However, a laser pulse can kick out an electron, creating what researchers call a "photohole." These photoholes only last for several femtoseconds, but may lead to the breaking of chemical bonds and the formation of new bonds. When the indium nanowire is hit with a laser pulse, the system forms a metallic bond, which explains its phase change into an electrical conductor.

Supercomputing simulations allow researchers to put the electrons' paths in motion, ultimately helping them study the full reaction "pathway." Researchers run first principles simulations, meaning that they start with no assumptions about how an atomic system works, then computationally model atoms and their electrons under the experimental conditions. These types of intensive, first principles calculations require leading-edge supercomputing resources, such as those provided through the Gauss Centre for Supercomputing at HLRS.

Between its former work and its current project, the team now better understands the important role that photoholes play in shaping how energy is distributed across a system, ultimately giving the researchers a reliable computational method with which to simulate extremely fast phase transitions.

The team's current simulations consist of around 1,000 atoms, which, while small, allows them to get a representative sample of how a system's atoms and their constituent electrons interact. The Paderborn group got help from the HLRS team in optimizing its code, allowing it to run efficiently on up to 10,000 cores in parallel. Schmidt explained that while the overall research would benefit from growing the system size to the order of 10,000 atoms, the next phase of the team's work is to work on more complex systems.

"The current research is a complex calculation, but a simple system," he said. "Our next step is to develop this research as it relates to photocatalysts or systems that are relevant for large-scale energy production—we want to apply this to a real system." By better understanding electrons' behaviours at the atomic level, researchers aim to design better materials for converting, transporting, and storing energy.