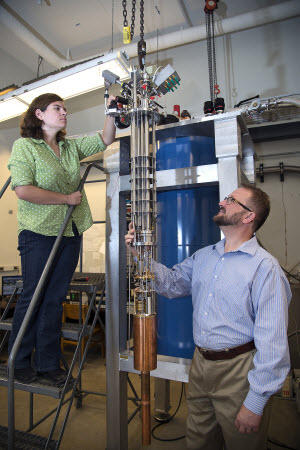 Purdue University professor Gábor Csáthy and graduate student Katherine Schreiber inspect equipment used to cool samples to near absolute zero. The equipment was used in Purdue-led research that led to the observation of an unexpected phase transition in an ultrapure material.Photo credit: Mark Simons, Purdue UniversityWEST LAFAYETTE, Ind. — An ultrapure material taken to pressures greater than that in the depths of the ocean and chilled to temperatures colder than outer space has revealed an unexpected phase transition that crosses two different phase categories.

A Purdue University-led team of researchers observed electrons transition from a topologically ordered phase to a broken symmetry phase.

"To our knowledge, a transition across the two groups of phases had not been unambiguously demonstrated before, and existing theories cannot describe it," said Gábor Csáthy, an associate professor in Purdue's Department of Physics and Astronomy who led the research. "It is something like changing water from liquid to ice; except the two phases we saw were very different from one another."

A paper detailing the results of the Department of Energy and National Science Foundation-funded research will be published in an upcoming issue of Nature Physics and is currently available online.

A phase is a certain organization of matter. Most people know the ice, liquid and gas phases, and some are familiar with the different magnetic phases that store data in our electronic devices and the liquid crystalline phases that are used to create an image on certain electronic displays, but there are many other phases, Csáthy said.

In 1937 physicist Lev Landau established a theoretical framework that explained and classified all of the known phases, but in the late 1980s it was realized that there existed a second group of phases that occur at very low temperatures that do not fit in Landau's theory. The new phases were named topological phases, while the traditional phases described by Landau's theory are called broken symmetry phases, said Eduardo Fradkin, a professor of physics at the University of Illinois at Urbana-Champaign and director of the Institute for Condensed Matter Theory at the University of Illinois, who participated in the research and is a co-author of the paper.

Topological phases have been an area of focus in the field of condensed matter physics because of their special properties and potential technological applications, including quantum computing.

Csáthy specializes in the study of topological phases in semiconductors and works to discover and characterize rare topological phases. His team employs novel investigative techniques for the study of electrons freely flowing in ultrapure gallium-arsenide semiconductor crystals, which is a perfectly aligned lattice of gallium and arsenic atoms that can capture electrons on a two-dimensional plane.

Only a few groups in the world are able to grow the material, and the ultrapure crystals used in this research were grown by a group led by Michael Manfra, professor of physics and astronomy at Purdue. Manfra also is a professor of both materials engineering and electrical and computer engineering.

The gallium arsenide crystals grown using the molecular beam epitaxy technique serve as a model platform to explore the many phases that arise among strongly interacting electrons, said Manfra, who also participated in the research and is a co-author of the paper. 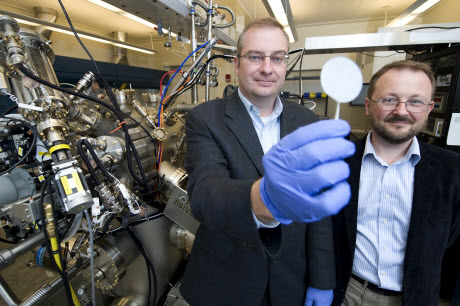 Purdue University professor Gábor Csáthy stands next to professor Michael Manfra, who holds a gallium-arsenide wafer in his high-mobility gallium-arsenide molecular beam epitaxy system, or MBE, laboratory at the Birck Nanotechnology Center in Discovery Park. Csáthy led a research team that observed an unexpected phase transition in ultra pure material grown by the Manfra group.Photo credit: Andrew Hancock, Purdue University"Our gallium arsenide is unique among semiconductors and other novel materials due to its extremely low level of disorder," he said. "The extremes required for this science – extreme purity, extreme temperatures – are not easily achieved, but it is worth the effort to discover new phenomena involving the entire sea of electrons acting in concert. This is the biggest kick for scientists like us and why we try to push our experimental techniques to the absolute limit."

Material grown by the Manfra group was shown to have an electron mobility measurement of 35 million centimeters squared per volt-second, a measurement that puts it among the highest levels of purity achieved by any group in the world.

"In most materials electrons are very restricted in what they can do because they bump into atomic-level defects that perturb them, scatter them and destroy fragile phases and correlated states," Csáthy said. "The material grown by the Manfra group is so pure and free from defects that it gives electrons the freedom to enter into more than 100 different phases, which is astonishing. Some of these phases simply couldn't exist in other materials."

Csáthy's team used unique equipment and techniques to take electricity to a temperature of 0.012 Kelvin, which is close to absolute zero and is about 460 degrees below zero Fahrenheit, and a pressure as high as 10,000 atmospheres, which is 10 times the pressure one would feel in the deepest part of the ocean, the Mariana Trench.

The extremely low temperature encourages the electrons to enter into exotic states where they no longer obey the laws of single particle physics, but instead are governed by their mutual interactions. A collective motion of the electrons is then possible that is described by the laws of quantum mechanics, instead of the laws of classical mechanics, he said.

Csáthy's research team was focusing on the fractional quantum Hall state at quantum number 5/2, which is believed to be a non-Abelian topological phase. Non-Abelian states are different from anything known in nature, he said.

"Imagine eggs in an egg carton as electrons arranged in a certain formation," he said. "The eggs are identical just like the electrons are identical particles. If you swap one egg with another, nothing has changed. It is still a group of eggs in the same formation. If someone did not see the swap, he or she would never know it had happened. In non-Abelian states, if you swap two electrons, it causes a change to the entire group and the egg carton enters an entirely different state. This ability of a swap to affect the state of the entire group is a very special property."

The team was trying to induce an electron spin transition in this non-Abelian state, but before the desired state was reached, the electrons spontaneously transitioned into the so-called "stripe" phase that belongs to the traditional, broken symmetry phases group.

"When we started the experiment we were trying to accomplish something else, but the stripes kept popping up and we would lose the fractional quantum Hall phase we were investigating," Csáthy said. "We were very surprised because it was thought that these two different categories of phases were far apart and such a transition was impossible, but the electrons went from deep in the topological phase to deep in the broken symmetry phase."

The team then changed the course of the experiment to go step by step through the new transition.

Rui-Rui Du, an expert in fractional quantum Hall experiments who has been in the field for more than 20 years, said the experiment presents something conceptually new in the change from a topological to a non-topological phase and also provides a new approach to better understand these phases.

"Through a clever experimental method, namely by applying pressure, the work demonstrates that such a topological phase transition can be fine-tuned by a new experimental knob," said Du, who is a professor of physics and astronomy at Rice University and did not participate in the research. "It is well known that the 5/2 fractional quantum Hall state may harbor so called non-Abelian quasiparticles, which are thought to be useful for topological quantum computers. This work offers a new method in further exploring the nature of the 5/2 state. It presents some of the most interesting work in the field for a long time."

The team next plans to characterize the new phase transition and establish its parameters so that the data can be compared to the developing theories, Csáthy said.

In addition to Csáthy, Manfra and Fradkin, co-authors of the paper include Nodar Samkharadze, a former research associate in the Department of Physics and Astronomy at Purdue who is now at Delft University of Technology; Katherine Schreiber, a graduate student in Purdue's Department of Physics and Astronomy; and Geoffrey Gardner, graduate student and senior research associate in Purdue's School of Materials Engineering.