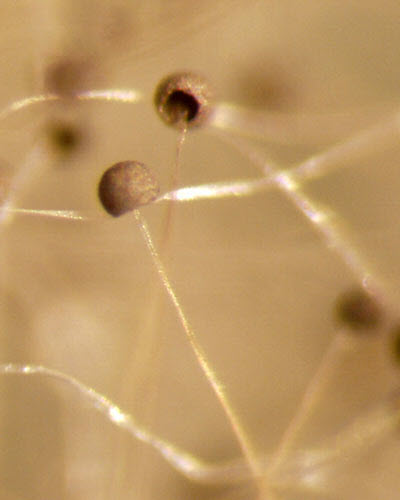 Spore-containing structures of the species Rhizopus delemar, which is one of the most commonly isolated fungal species from people with mucormycosis.Image courtesy of the University of Maryland School of MedicineMost people don’t think of fungal infections as deadly—they are generally viewed as annoyances—athlete’s foot, for instance.

But for many weakened patients in the hospital, fungal infections can be life threatening. Some experts estimate that tens of thousands of patients die every year from these infections. Recent research has also found that wounded soldiers in Iraq and Afghanistan have sometimes died after fungus from soil is driven deep into their wounds, causing untreatable infections.

Now, a new study by scientists at the University of Maryland School of Medicine (UM SOM) has provided new insights into one of these microbes, the Mucorales fungi, which can cause fatal infections.

The study was published July 22 in the journal Nature Communications. The researchers delineated several key aspects of the fungus that might help researchers develop treatments for the fungus. Right now, there is no way to treat these fungal infections. For example, all of the mucormycosis-causing fungi tested contained several copies of a gene known to be involved in host invasion. 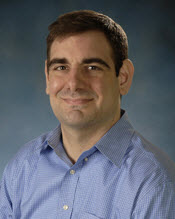 The other lead author is Ashraf S. Ibrahim, PhD, a scientist at LA BioMed, a nonprofit independent biomedical research institute in Los Angeles. Marcus Chibucos, PhD, a research associate at the IGS, also contributed significantly to the study.

There are between 50 and 100 species of the Mucorales fungus. Dr. Bruno and his colleagues compared the genes of 25 of these. The study identified several pathways that are required for mucormycosis to develop in a patient.

Generally the fungus invades the cells of people with weakened immune systems and causes a sometimes-deadly infection known as mucormycosis.

Patients whose immune systems are not working properly are especially at risk. This group includes patients with diabetes, people who have recently undergone transplants, or who have suffered wounds. In addition to soldiers wounded in Iraq and Afghanistan, the fungal infections also appeared in some patients hurt in the 2004 tsunami in Indonesia and the tornadoes that occurred in Joplin, Missouri, in 2011.

These infections are considered to be rare, but Dr. Bruno notes that they are probably often overlooked and underreported, and so may be much more common than previously realized.

“There are no vaccines or effective therapies available today to halt the highly fatal mucormycosis infection,” said Dr. Ibrahim. “There is an urgent need for additional research to develop strategies to protect patients with weakened immune systems.”

The researchers say they have identified a pathway that has the potential to be targeted to treat these infections. It appears that these fungi are less able to invade human cells after the inhibition of a protein called platelet-derived growth factor receptor (PGDFR), which plays a key role in cell growth. Dr. Bruno and Dr. Ibrahim are now beginning research to find out whether this protein can be targeted to treat these fungal infections. They suspect that there may be existing drugs, already approved by the FDA that can effectively inhibit PGDFR; this would make the path to finding treatment for these fungal infections much simpler.

“This work is both innovative and exciting,” said UM SOM Dean E. Albert Reece, MD, PhD, MBA, who is also vice president for medical affairs at the University of Maryland and the John Z. and Akiko K. Bowers Distinguished Professor. “It combines “big data” with basic science, and points the way toward what may be critically important clinical solutions.”