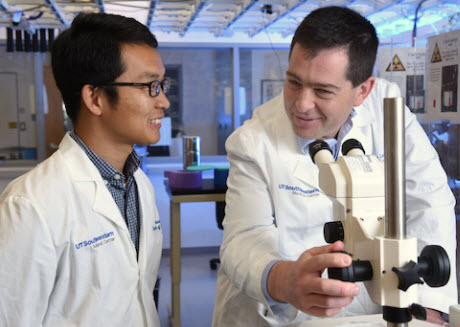 Their high-resolution structure of the human cannabinoid receptor 1 (CB1) and its binding site for the chemical tetrahydrocannabinol (THC) should lead to a better understanding of how marijuana affects the brain. The research also could aid discovery of new treatments for conditions that target the receptor, said Dr. Daniel Rosenbaum, assistant professor of Biophysics and Biochemistry at UT Southwestern.

Related Article: How Can Stress Cause Anxiety? Blame the Brain's Cannabis

“What is most exciting from a therapeutic standpoint is that the same receptor pocket that binds THC also binds cannabinoid inhibitors that have been studied as possible treatments for conditions such as obesity,” said Dr. Rosenbaum, senior author of the study published online Nov. 16 by Nature. 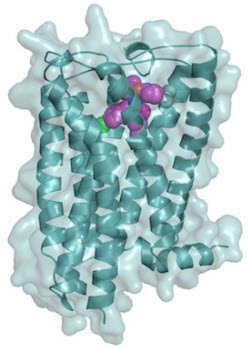 Illustration of human cannabinoid receptor (blue) with the cannabinoid inhibitor taranabant (magenta) bound at the receptor’s binding pocket sitting on molecular surface (gray).Image courtesy of the UT Southwestern Medical Center“The structure is an important step toward explaining how cannabinoids initiate signals in the brain that affect the release of neurotransmitters that relay messages between the brain’s neurons,” Dr. Rosenbaum said. “This 3-D structure provides high-resolution details of the binding pocket in the CB1 receptor, where plant cannabinoids like THC, cannabinoids made in the body, and synthetic cannabinoid inhibitors all work to modulate receptor function and physiology.”

He said the CB1 receptor is the target for cannabinoid inhibitor drugs now under study as possible treatments for epilepsy, pain control, obesity, and other conditions.

In a competing study released last month by the journal Cell, a U.S.-Chinese team of researchers reported a 3-D structure of the CB1 receptor at a resolution of 2.8 angstroms. The UT Southwestern study reports a higher resolution of 2.6 angstroms. (One angstrom is equivalent to one hundred-millionth of a centimeter.) The higher the resolution, the finer the details of the relationship between atoms of the protein.

“The resolution is very important. Our structure shows a different and better resolved structure at the important binding pocket that is of interest to scientists involved in drug development,” Dr. Rosenbaum said. “Overall, these two structures are complementary, but we believe our structure may provide a better framework for understanding how cannabinoids and inhibitors bind to the receptor.”

The Cell study examined the CB1 receptor bound to a synthetic chemical created to stabilize the receptor. In contrast, the UT Southwestern research team successfully imaged the receptor bound to the drug taranabant, which was tested as a possible anti-obesity treatment in clinical trials. Those trials ended due to side effects such as anxiety and depression, Dr. Rosenbaum said.

CB1 and the related CB2, which still lacks a high-resolution structural solution, are both members of the human G protein-coupled receptor family. Members of that receptor family control signaling pathways involving hormones, neurotransmitters, and sensory stimuli such as light and odors.

The team’s success depended on overcoming the receptor protein’s resistance to crystallization, which is required for the diffraction measurements used in X-ray crystallography. The researchers also conducted computer simulations of how THC might bind to the CB1 receptor, he said.

The next step is to obtain structures of CB1 actually bound to THC, he said.

Dr. Rosenbaum, a Eugene McDermott Scholar in Medical Research at UT Southwestern, was listed as one of the world’s most highly cited researchers in 2014, according to data compiled by Thomson Reuters. This is his second study published in Nature in the past six months. His earlier study pertained to the structural biology of an important membrane protein involved in cholesterol metabolism.

The research was funded by the Welch Foundation and the Packard Foundation. The study also received support from the Advanced Photon Source (APS), a U.S. Department of Energy Office of Science User Facility operated by the Argonne National Laboratory. 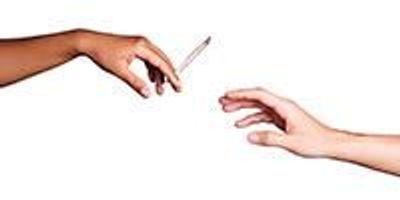 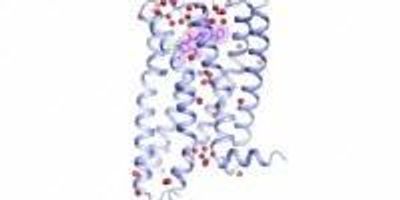 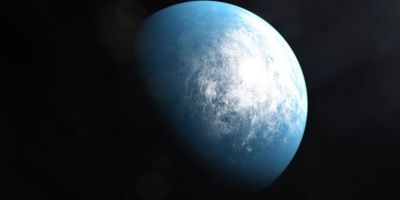