A recent study published in Neuron describes in greater detail than ever before the anatomical embodiment of color sensations in the cerebral cortex, linking brain structure to perceptual function.

This discovery was the fruit of cooperative work between researchers in Dr. Wei Wang's lab at the Institute of Neuroscience, Center for Excellence in Brain Science and Intelligence Technology of the Chinese Academy of Sciences (CAS), State Key Laboratory of Neuroscience, and Dr. Shiming Tang's lab at Peking University.

Color is often found at the center of philosophical debates about the nature of conscious experience, mainly because color, more than any other sensation, illustrates that all perception is a mental creation. As realized early in the 18th century by Isaac Newton, visible wavelengths of electromagnetic radiation are not intrinsically colored; all the thousands of different hues we can recognize are simply arbitrary tags devised by the brain to represent various spectral compositions of light across the retinal image.

More technically, the outputs of retinal photoreceptors that discriminate wavelengths are combined and processed to eventually generate a perceptual color space. Color signals are processed through multiple neural stages in the deep brain; however, how our brains transform quantum-level events in photoreceptors to yield the many thousands of different hues we see every day is poorly understood. 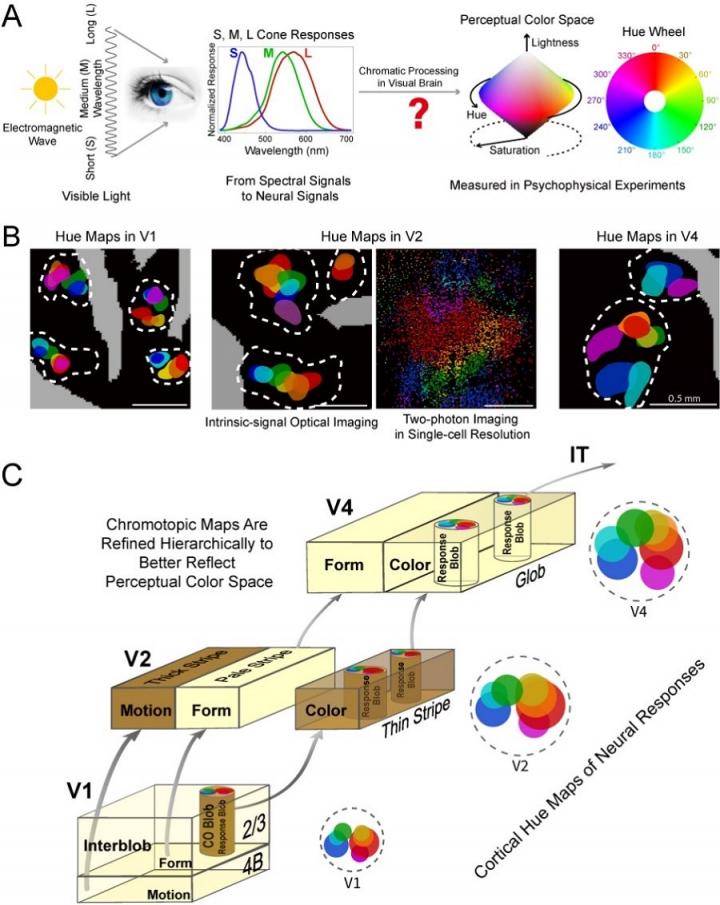 A. Visible wavelengths of electromagnetic radiation are not intrinsically colored. Cone cells in the retina can convert spectral information into neural signals, and these signals are further processed by the visual brain to ultimately create color perception. How color signals are processed through serial cortical stages is poorly understood; B. By applying multiple techniques, researchers charted and analyzed hue maps across three successive cortical areas—V1, V2, and V4; C. This comparative study reveals the brain's hue-maps develop hierarchically from cone-activation signals to isotropic hue representation, better reflecting the perceptual color space.
CEBSIT

To address this question, researchers in Wang and Tang's labs applied multiple techniques capable of imaging macaque brain activity at different scales and levels of resolution across successive processing stations in the cortex known as areas V1, V2, and V4. The aim of their study was to examine hierarchical changes in the patterns of activity when these areas process exactly the same color pattern.

The imaging methods reveal "hue maps," i.e., color palettes in the brain, spectrally organized arrangements of multiple hue responses. Figuratively, they can be thought of as rainbows of various conformations that are scattered across the brain surface.

The novel findings of this study arise from the fine structure of these hue maps. In V1, red and blue hues predominate, but this pattern of so-called "endspectral" dominance recedes in V2 and is nearly absent in V4. Essentially, the brain's hue maps develop hierarchically toward the uniformity of the perceptual hue map.

Computationally, the brain appears to be progressively integrating two distinct classes of cone-opponent signals originating in the retina. The information defining the precise hue of any given light is thus present in V1, coded by the ratio of activity between cone-opponent inputs—but it is not perceptible until it undergoes combinatorial processing by single neurons in area V4 and higher processing stations.

In summary, this comparative study reveals a progressive integration from cone-activation signals to isotropic hue representation along the visual hierarchy upon which our perceptual color space is built.

- This press release was originally published on the CAS website