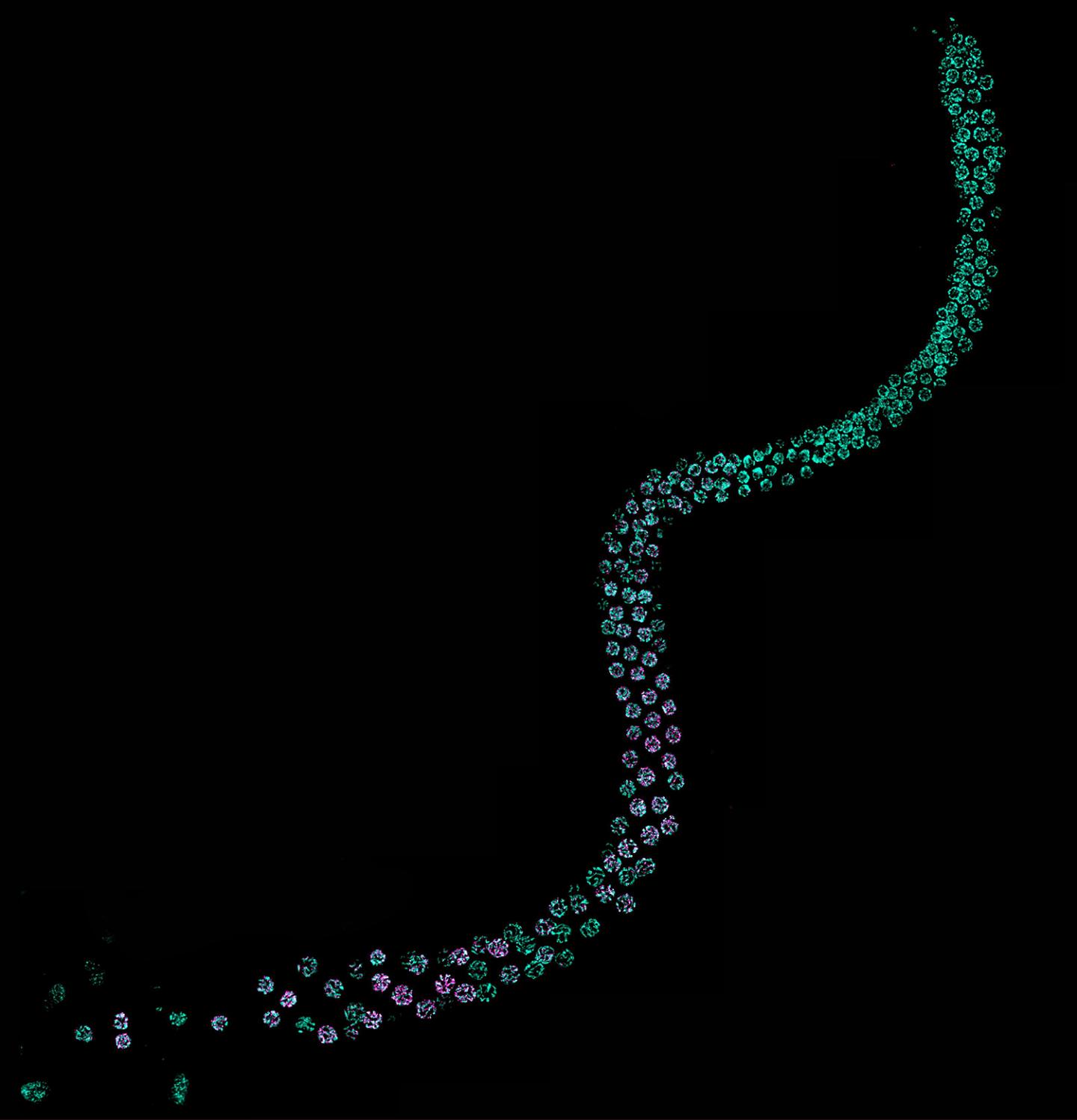 Immunofluorescence image of the C. elegans male germline, obtained with a DeltaVision Ultra High Resolution widefield microscope, after exposure to heat shock. DNA is shown in cyan (greenish-blue) and sites of DNA damage are shown as magenta foci. High levels of DNA damage are apparent in the meiotic region of the germline.
Image by Nicole Kurhanewicz

In humans, the optimal temperature for sperm production is just below body temperature, in a range of about 90-95 degrees F. Human studies have found that exposure to temperatures as little as 1°C (1.8°F) above this normal range adversely affects male fertility, said Diana Libuda, a professor in the Department of Biology and Institute of Molecular Biology.

The phenomenon of heat-induced male infertility is well known, and the effects of modern exposures to heat such as hot tubs, tight clothing and excessive drive times have been extensively studied. The underlying mechanisms that damage sperm and impair fertilization are not completely understood.

"In both humans and C. elegans, relatively small increases in temperature are sufficient to reduce male fertility," said Libuda.

An increase of 2°C (3.6°F) above normal in C. elegans, a type of roundworm, led to a 25-fold increase in DNA damage in developing sperm compared to unexposed sperm. Eggs fertilized by these damaged sperm failed to produce offspring.

This basic research discovery is detailed in a paper published online Oct. 15 in the journal Current Biology by researchers in Libuda's UO lab. Postdoctoral researcher Nicole A. Kurhanewicz is the study's lead author.

The study provides a roadmap for scientists to pursue studies in mammals and humans to confirm if the same mechanisms contribute to male infertility, said R. Scott Hawley, a meiosis research expert who was not involved in the research.

Hawley, a member of the National Academy of Sciences and dean emeritus of the graduate school of the Stowers Institute for Medical Research in Kansas City, Missouri, had heard about preliminary findings at an academic conference.

"I think this is a hallmark paper because it shows an environmental effect that alters specific DNA sequences and the presumably the proteins that control their activity," Hawley said. "What Diana and Nicole's work has done is to clearly say what goes wrong, at the level of molecules, when sperm-making is altered by heat, at least in worms."

The paper also helps to understand how meiosis, the process that produces sex cells, differs between sperm and eggs. 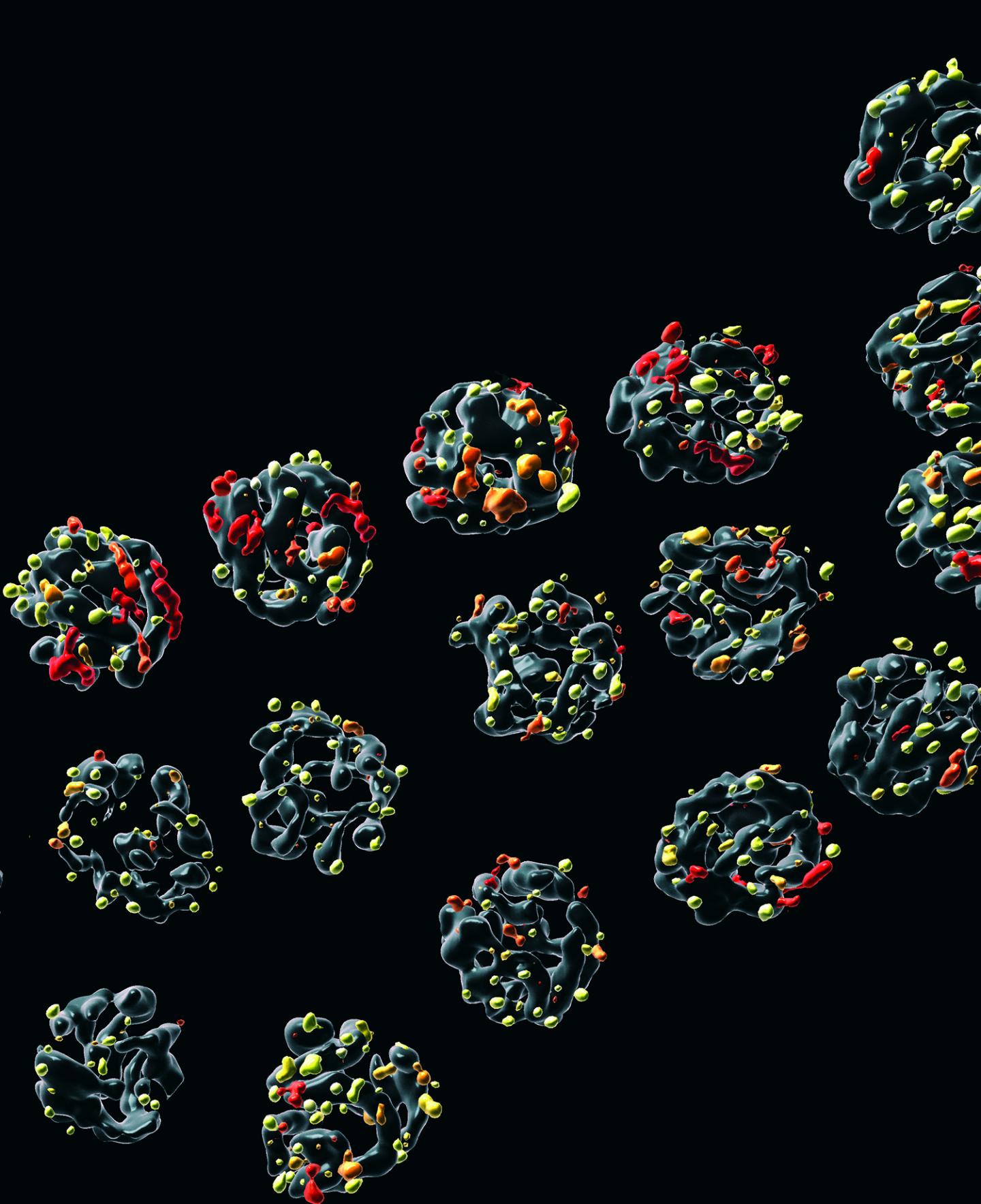 "We know that sperm development is very sensitive to increased temperature, while egg development is not affected," Kurhanewicz said. "The data presented in this paper suggest that another way egg and sperm develop differently is in how tightly they control the ability of mobile DNA elements, which are also known as 'jumping genes' or transposons, to move in the genome, and how sensitive to heat stress those mechanisms are in preventing that movement."

Transposons are DNA segments that move around and alter genetic information by inserting themselves in new positions. They also leave DNA damage in their wake. Movement of these "jumping genes" is normally repressed in developing sperm and eggs. However, this study found that with exposure to heat transposons are moving specifically in developing sperm.

The research team used microscopy to observe developing sperm and eggs under both normal and heat-stressed conditions. In the latter, the researchers saw higher amounts of DNA damage in sperm, but not eggs. Using next-generation genome sequencing, they also identified the locations of transposons across the whole genome with and without exposure to heat.

"We found that after heat shock, certain transposons are found in new and more variable locations in the male genome," Kurhanewicz said.

The study, Hawley said, not only shows that a small rise in temperature affects meiotic divisions but she also identifies a mechanism—not only where the error occurs but what the error is.

"This is where it gets exciting," he said. "If we can determine how much of a change is bad, and if you are really concerned about the environmental matters such as hot tubs or 'boxers versus briefs,' this type of molecular understanding may allow us to reframe the debate on solid scientific grounds."