CLEMSON — Trees that are removed during forest restoration projects could find their way into car bumpers and fenders as part of a study led by Srikanth Pilla of Clemson University.

Pilla is collaborating on the study with researchers from the USDA Forest Service’s Forest Products Laboratory in Madison, Wisconsin. 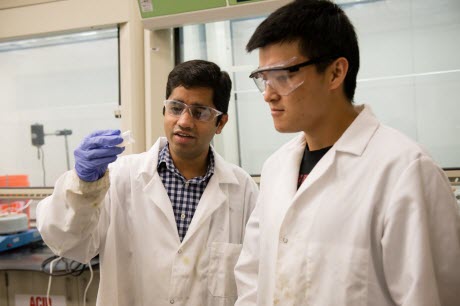 Srikanth Pilla, left, works with a graduate student in their lab.Photo courtesy of Clemson UniversityThey are converting some of those trees into liquid suspensions of tiny rod-like structures with diameters 20,000 times smaller than the width of a human hair. Pilla is using these tiny structures, known as cellulosic nanomaterials, to develop new composite materials that could be shaped into automotive parts with improved strength.

The auto parts would also be biorenewable, which means they could go to a composting facility instead of a landfill when their time on the road is done. The research could help automakers meet automotive recycling regulations that have been adopted in Europe and could be on the way to the United States.

Pilla, an assistant professor in the automotive engineering department at Clemson University, wants to use the composite materials he is creating to make bumpers and fenders that will be less likely to distort or break on impact.

“They will absorb the energy and just stay intact,” he said. “You won’t have to replace them because there will be no damage at all. Parts made with current materials might resist one impact. These will resist three or four impacts.”

The U.S. Department of the Agriculture’s National Institute of Food and Agriculture is funding the $481,000 research project for five years. Pilla’s research will be based out of the Clemson University International Center for Automotive Research in Greenville, South Carolina.

Craig Clemons, a materials research engineer at the Forest Products Laboratory and co-principal investigator on the project, said that the Forest Service wants to find large-volume uses for cellulosic nanomaterials.

The research is environmentally friendly from start to finish.

The cellulosic nanomaterials could come from trees that are removed during forest restoration projects. Removing this material from the forests helps prevent large, catastrophic wildfires. Researchers will have no need to cut down healthy trees that could be used for other purposes, Pilla said.

One of the technical challenges Pilla and Clemons face in their work is combining the water-friendly cellulosic nanomaterials with the water-unfriendly polymers. They will need to show that the material can be mass produced because automakers need to make thousands of parts.

“We will use supercritical fluid as a plasticizer, allowing the nanoreinforcements to disperse through the polymer,” Pilla said. “We can help develop a conventional technique that will be scalable in the automotive sector.”

Robert Jones, executive vice president for academic affairs and provost at Clemson, congratulated Pilla on the research, which touches on Jones’ area of expertise.

Jones has a bachelor’s in forest management, a master’s in forestry from Clemson and a doctorate in forest ecology from the State University of New York College of Environmental Science and Forestry, Syracuse University.

“The research that Srikanth Pilla is doing with the USDA Forest Service is a creative way of using what might otherwise be a low-value wood product to strengthen automobile parts,” Jones said. “It’s even better that these parts are biorenewable. The research is good for the Earth in more ways than one.”

This research could grow in importance if the United States were to follow the European Union’s lead in setting requirements on how much of a vehicle must be recovered and recycled after it has seen its last mile on the road.

“In the U.S., such legislation is not yet here,” Pilla said. “But it could make its way here, too.”

Pilla is quickly establishing himself as a leading expert in making next-generation automotive parts. He won the 2016 Robert J. Hocken Outstanding Young Manufacturing Engineer Award from the nonprofit student and professional organization SME.

Pilla is nearing the end of the first year of a separate $5.81-million, five-year grant from the Department of Energy. As part of that research, Pilla and his team are developing ultra-lightweight doors expected to help automakers in their race to meet federal fuel economy standards.

“Dr. Pilla is doing research that helps Clemson and the auto industry stay a step ahead,” Filipi said. “He is anticipating needs automakers will face in the future and seeking solutions that could be put into place very quickly. His research with the USDA Forest Service is another example of that.”

“Dr. Pilla’s work continues to have an impact on automotive engineering, especially in the area of manufacturing,” Gramopadhye said. “His innovations are positioning Clemson, the state, and the nation for strength into the future.”