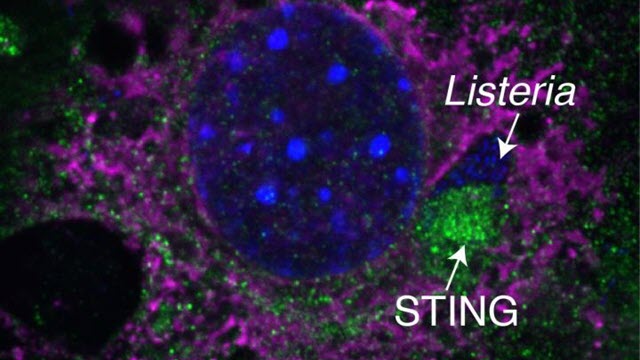 A magenta-stained cell shows how the molecule STING (green) is positioned next to the bacteria Listeria (blue) to start an immune responseCREDIT: Washington State University

Washington State University researchers have seen how both humans and fruit flies deploy a protein that plays a critical role in their immune responses to invading bacteria. The discovery gives scientists a model organism with which to explore ways to boost the human immune system and create infection-fighting medicines.

Naturally, there are enormous differences between humans and fruit flies, whose common ancestor goes back 800 million years. But the immunity-triggering protein they share is nearly identical, said Alan Goodman, an assistant professor of the School of Molecular Biosciences and lead author of a paper in Cell Reports.

"The key, and what I think is most interesting about this, is the mechanism is the same," said Goodman.

The protein is called STING, or stimulator of interferon genes. Interferon fights infection, calling in white blood cells when an organism is under attack from viruses, bacteria or other pathogens.

Goodman and his colleagues exposed fruit flies to listeria, a pathogenic bacteria that can be found in contaminated food or water. They then documented how dmSTING, a protein genetically similar to human STING, mobilized the body's first (or "innate") immune response to the pathogen. The "dm" stands for Drosophila melanogaster, the fly's scientific name.

Research on humans and other animals is subject to numerous legal and ethical restrictions, but work on insects falls outside most of the animal care and use protocols required of WSU and other research institutions. Now if researchers want to learn more about, say, the autoimmune disease SAVI, for STING-associated vasculopathy with onset in infancy, they can try replicating the disease by using gene editing (for example, the CRISPR/Cas9 technology underpinning WSU's Functional Genomics Initiative) to put a mutant STING gene in the fruit fly, said Goodman.

Similarly, he said, researchers can knock out certain genes to deduce which ones are behind an immune response and look for therapies that can facilitate it to fight infection.

"There are 50,000 different strains of fruit fly already made that also have genetic mutations," said Goodman. "We can buy them or easily make our own, both of which we did for this paper. We can't do that with humans. We can use the fly to do those types of genetic experiments to really home in on a potential mechanism or understand a broader mechanism for how this protein functions."