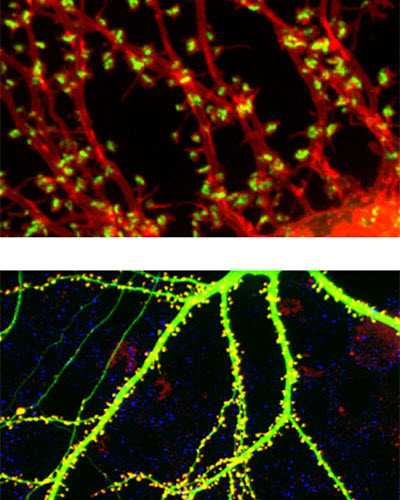 Synapses visualized in live neurons. The overall structure of one cell in a dense network of interconnected neurons is visible from expression of a red and green fluorescent protein that fills that cell entirely.Photo courtesy of the University of Maryland School of MedicineFor more than a century, neuroscientists have known that nerve cells talk to one another across the small gaps between them, a process known as synaptic transmission (synapses are the connections between neurons). Information is carried from one cell to the other by neurotransmitters such as glutamate, dopamine, and serotonin, which activate receptors on the receiving neuron to convey excitatory or inhibitory messages.

But beyond this basic outline, the details of how this crucial aspect of brain function occurs have remained elusive. Now, new research by scientists at the University of Maryland School of Medicine (UM SOM) has for the first time elucidated details about the architecture of this process. The paper was published July 26 in the journal Nature.

Synapses are very complicated molecular machines. They are also tiny: only a few millionths of an inch across. They have to be incredibly small, since we need a lot of them; the brain has around 100 trillion of them, and each is individually and precisely tuned to convey stronger or weaker signals between cells.

To visualize features on this sub-microscopic scale, the researchers turned to an innovative technology known as single-molecule imaging, which can locate and track the movement of individual protein molecules within the confines of a single synapse, even in living cells. Using this approach, the scientists identified an unexpected and precise pattern in the process of neurotransmission. The researchers looked at cultured rat synapses, which in terms of overall structure are very similar to human synapses. 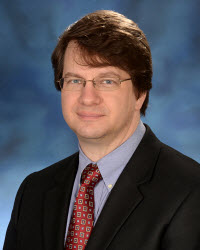 Thomas Blanpied, PhD.Photo courtesy of the University of Maryland School of Medicine"We are seeing things that have never been seen before. This is a totally new area of investigation," said Thomas Blanpied, PhD, associate professor in the Department of Physiology, and leader of the group that performed the work. "For many years, we've had a list of the many types of molecules that are found at synapses, but that didn’t get us very far in understanding how these molecules fit together, or how the process really works structurally. Now by using single-molecule imaging to map where many of the key proteins are, we have finally been able to reveal the core architectural structure of the synapse."

In the paper, Blanpied describes an unexpected aspect to this architecture that may explain why synapses are so efficient, but also susceptible to disruption during disease: at each synapse, key proteins are organized very precisely across the gap between cells. "The neurons do a better job than we ever imagined of positioning the release of neurotransmitter molecules near their receptors," Blanpied says. "The proteins in the two different neurons are aligned with incredible precision, almost forming a column stretching between the two cells." This proximity optimizes the power of the transmission, and also suggests new ways that this transmission can be modified.

Blanpied's lab has created a video representation of the process.

Understanding this architecture will help clarify how communication within the brain works, or, in the case of psychiatric or neurological disease, how it fails to work. Blanpied is also focusing on the activity of “adhesion molecules,” which stretch from one cell to the other and may be important pieces of the “nano-column.” He suspects that if adhesion molecules are not placed correctly at the synapse, synapse architecture will be disrupted, and neurotransmitters won’t be able to do their jobs. Blanpied hypothesizes that in at least some disorders, the issue may be that even though the brain has the right amount of neurotransmitter, the synapses don’t transmit these molecules efficiently.

Blanpied says that this improved comprehension of synaptic architecture could lead to a better understanding of brain diseases such as depression, schizophrenia and Alzheimer’s disease, and perhaps suggest new ideas for treatments.

Blanpied and his colleagues will next explore whether the synaptic architecture changes in certain disorders: they will begin by looking at a synapses in a mouse model of the pathology in schizophrenia.

"The complexity of the human brain seems overwhelming. But Dr. Blanpied and his colleagues have taken an important step in helping us understand this system,” said UM SOM Dean E. Albert Reece MD, PhD, MBA, who is also vice president for medical affairs at the University of Maryland and the John Z. and Akiko K. Bowers Distinguished Professor. “This study is impressive scientifically, and it is just the first step of what I am sure will be a long series of important discoveries about the brain and its disorders."