One way cannabidiol (CBD) appears to reduce the "cytokine storm" that damages the lungs and kills many patients with COVID-19 is by enabling an increase in levels of a natural peptide called apelin, which is known to reduce inflammation and whose levels are dramatically reduced in the face of this storm.

Now they have shown that apelin levels go way down with the viral infection, which has killed 1 million people worldwide, and that CBD quickly helps normalize those levels along with lung function.

"It was dramatic in both directions," says Dr. Babak Baban, DCG immunologist and associate dean for research, of shifting apelin levels in both circulating blood and lung tissue.

Blood levels of the peptide dropped close to zero in their ARDS model and increased 20 times with CBD, they report in the Journal of Cellular and Molecular Medicine.

"CBD almost brought it back to a normal level," Dr. Jack Yu, physician scientist and chief of pediatric plastic surgery at MCG, says of the apparent first connection between CBD and apelin.

Apelin is a pervasive peptide made by cells in the heart, lung, brain, fat tissue, and blood, and is an important regulator in bringing both blood pressure and inflammation down, says Baban, the study's corresponding author.

When our blood pressure gets high, for example, apelin levels should go up in the right place, like endothelial cells that line blood vessels, to help bring it down. Apelin should do the same to help normalize the significant increases in inflammation in the lungs and related breathing difficulties associated with ARDS.

"Ideally, with ARDS it would increase in areas of the lungs where it's needed to improve blood and oxygen flow to compensate and to protect," Baban says. But when they looked at their ARDS model, apelin didn't do either, and instead decreased in both the lung tissue itself and the general circulation. Until they gave CBD.

They reported this summer in the journal Cannabis and Cannabinoid Research that treatment with CBD reduced excessive lung inflammation, enabling improvements in lung function, heathier oxygen levels, and repair of some of the structural damage to the lungs that are classic with ARDS. The investigators said then more work was needed, including finding how CBD produced the significant changes as well as human trials, before it should be included as part of a treatment regimen for COVID-19.

Now they have correlated those improvements with regulation of apelin. While they don't attribute all CBD's benefits to apelin, they say the peptide clearly has an important role in this scenario. They also don't yet know whether the novel coronavirus, or CBD for that matter, have a direct effect on apelin, or if these are downstream consequences, but they are already pursuing answers to those unknowns.

"It is an association; we don't know yet about causative, but it is a very good indicator of the disease," Baban says of the bottom line impact of the viral infection on apelin levels.

The now familiar spiked virus enters human cells via the also pervasive angiotensin-converting enzyme 2, or ACE2, receptor. "The spike proteins have just the right docking mechanism," says coauthor Yu. And there is plenty of common ground between ACE2 and apelin, including the fact that many cell types and tissues have both, including the lungs.

Like other disease, the novel coronavirus appears to upset their positive partnership. The virus' binding to the receptor for ACE2 has been shown to decrease ACE2 levels and increase levels of the powerful blood vessel constrictor angiotensin II, because less angiotensin II gets degraded and fewer vasodilators get produced, which worsens the patient's prognosis. 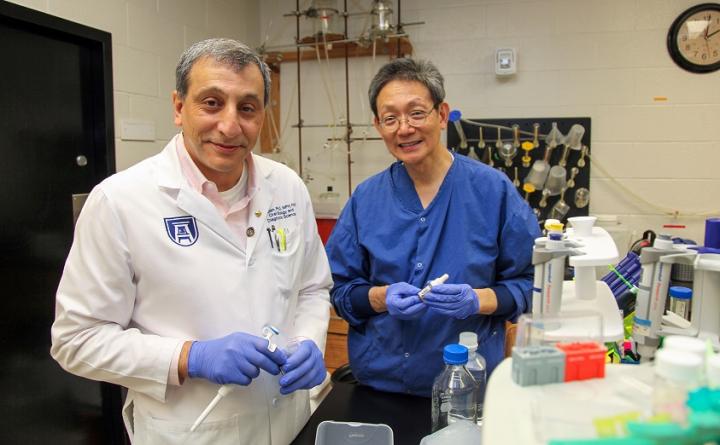 "Instead of ACE2 helping blood vessels relax, it helps the virus get into the host where it makes more virus instead of helping the lungs relax and do their job," says Yu.

While the researchers are still putting the pieces together, reduced levels of ACE2 appear to enable less apelin and less protection.

However it happens, their finding of dramatic reductions in apelin in the face of ARDS, makes levels of the protective peptide a potential early biomarker for ARDS and response to treatment efforts, they say.

The new finding was their first in learning more about how CBD produces the beneficial effects they saw in their model of ARDS. Next steps include better understanding the interaction between CBD, apelin and the novel coronavirus including why apelin goes down in the face of the virus and why CBD brings it up. That includes exploring how eliminating apelin affects ARDS and if CBD produces the same lung benefit without apelin.

Likely the virus suppresses something that suppresses apelin, they say and CBD interferes. But they doubt the apelin-CBD interaction is the only way the compound, the second most prevalent found in the marijuana plant, works in this and other scenarios.

The studies were enabled by the investigators' development of a safe, relatively inexpensive model of ARDS by giving a synthetic analog of double-stranded RNA called POLY (I:C). The novel coronavirus also has double-stranded RNA, while ours is single-stranded, so this analog produced a response similar to the virus, including the extreme lung damage that has led to the need for ventilator and other extreme support measures for patients, and is a major cause of death. Much as with the SARS-CoV-2 infection, the result is the "cytokine storm" that reflects an over-the-top immune response in the lungs, which results in an attack rather than protection.

For these studies, a control group received intranasal saline for three consecutive days while the COVID-19 model received POLY (I:C) intranasally for three days. A third group, the treatment group, received POLY ((I:C) and CBD over the same timeframe.

This time they looked and also found significantly reduced apelin levels in the mice that developed COVID-like symptoms compared to controls. Treatment with CBD normalized the immune response and apelin levels, along with oxygen levels and swelling and scarring in the lungs characteristic of the deadly ARDS.

"The apelinergic system is a very, very ubiquitous signaling system," Yu says. While it has diverse jobs in different places, and levels may rise and fall depending on what is needed, its levels are consistently measurable in the lungs, one of the reasons it should be a good biomarker, and it's also generally considered protective, they say.

Apelin's important, diverse roles include helping ensure the placenta is well supplied with blood and the oxygen and nutrients it carries during a pregnancy. In fact, DCG and MCG investigators decided to look at apelin because of the work of Dr. Évila Lopes Salles, a postdoctoral fellow with Baban in the DCG Department of Oral Biology and the study's first author, who was looking at the peptide's significant impact in gestation and clear anti-inflammatory role, Baban says.

Synthetic agonists that increase apelin levels exist and are showing promise in the laboratory for cardiovascular disease, including slowing the growth rate of weak points in blood vessels called aneurysms. CBD appears to be a natural apelin agonist, the researchers say.