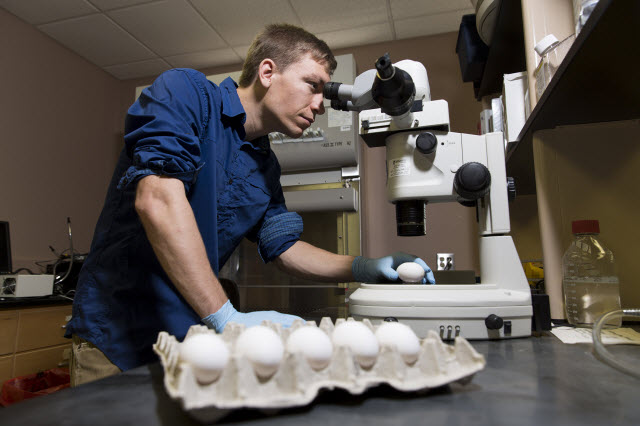 Athens, Ga. - An overwhelming number of researchers still struggle within the black hole of the effectiveness and safety of stem cell therapy for neurological diseases. While the complexity of understanding how neurons grow, connect, and function has long been studied, it remains a mystery, one that graduate student Forrest Goodfellow in the University of Georgia Regenerative Bioscience Center is helping unravel.

Goodfellow, a graduate student in the University of Georgia's Regenerative Bioscience Center, has developed a unique approach of marrying stem cell biology and 3D imaging to track and label neural stem cells. His findings were published in the journal Advanced Functional Material. 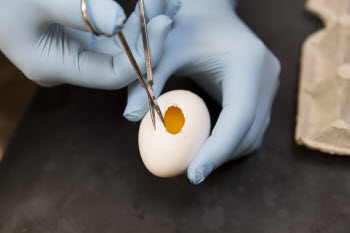 Forrest Goodfellow, a graduate student in University of Georgia's Regenerative Bioscience Center, cuts into a chicken egg to study neural stem cells and their behavior.Photo credit: Andrew Davis Tucker/UGAUsing microscopic iron beads and a chicken egg, he and his colleagues were able to label neural stem cells and watch them for multiple days using magnetic resonance imaging—without harming the cell.

Very little is known about the unusual behavior of neural stem cells after experimental treatment. Understanding their whereabouts, keeping them safe from the body's own immune system and tracking the intended destination for repair in a noninvasive manner is the next important step in regenerative medicine therapy.

"The unknown is that big ‘black box' when people inject neural stem cells and have no idea where they go, or what they do-it's pretty invasive and inaccurate," said Steven Stice, a Georgia Research Alliance Eminent Scholar and director of the Regenerative Bioscience Center who is housed in the College of Agricultural and Environmental Sciences.

The question remains, he said, of whether injecting neural stem cells to restore damaged neurons and allowing the body to heal as it is meant to naturally really delay the onset of symptoms, such as Alzheimer's and Parkinson's diseases.

To answer that question, Goodfellow painstakingly labeled neural stem cells with extremely small iron beads and then transplanted the cell into a chicken embryo.

"We went to great pains to prove and demonstrate that our labeling method does not harm the stem cells," said Goodfellow, who started as an undergraduate in Stice's lab while majoring in animal and dairy science in the UGA College of Agricultural and Environmental Sciences. "If we are altering transplanted stem cells that we hope will be an effective treatment, then it's a moot point if we do it blindly."

Before proving that neural stem cells could be tracked with MRI, the RBC research collaboration, which included Qun Zhao, Luke Mortensen, and Gregory Simchick, first had to determine if the iron beads were harmful to the neural stem cells. For 14 days, they tracked and compared live cells and evaluated the fate of derived cells based on their gene expression profile.

"We had to take it to the next level and be able to follow the process through for a period of time," Stice said. "No one has really been able to follow neural cells at any great depth to the level of specificity that we were able to do."

The findings focus mainly on neural stem cells, but Goodfellow sees potential for their use with mesenchymal stem cells. 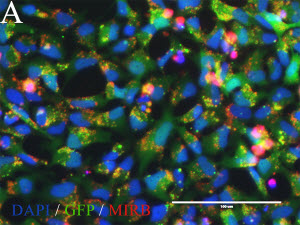 Neural stem cells are expressing green fluorescent protein and labeled with the iron beads that are red in color.Image courtesy of the University of Georgia"One novel aspect of this iron nanoparticle is the iron center covered in synthetic polymers," Goodfellow said. "The covering can be manipulated to show up in green, red, or a spectrum of colors with fluorescent microscopy and MRI for a multitude of regenerative therapies-but the surface is what helps it to not harm the cells."

The dextran coating used around the nanoparticle increases the nanoparticles biocompatibility, allowing for a larger loading capacity and the protection of a stable environment, he said.

In addition to developing a chick model and applications for toxicology testing in the near future, Goodfellow and his team hope that this project may finally shed some light on the uncertainty surrounding neural stem cells and the great therapeutic promise for healing patients after stroke, traumatic brain, and spinal cord injuries.

"The hope is that this research will get stem cells to clinical applications faster, even if we are just doing rodent studies," he said. "If we are able to see that the cells are surviving and integrating and not adversely affecting the animal, then the likelihood of us getting through clinical trials and onto a real therapy is a lot greater and a lot faster."