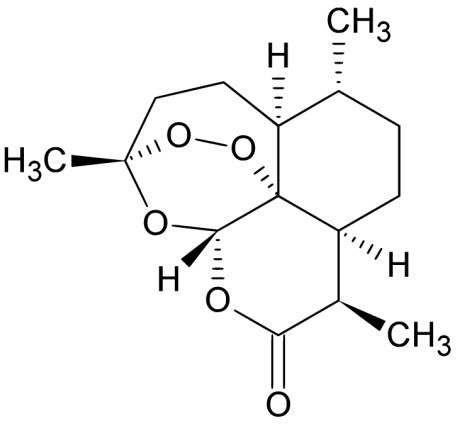 Chemical structure of artemisinin.Image credit: Lukáš Mižoch, Wikimedia CommonsA team of researchers from the National University of Singapore (NUS) has uncovered the mystery behind the potent parasite-killing effect of artemisinin, a drug that is considered to be the last line of defence against malaria. Given the emergence of artemisinin resistance, these findings could potentially lead to the design of new treatments against drug-resistant parasites.

Assistant Professor Lin Qingsong, who is from the Department of Biological Sciences under the NUS Faculty of Science and is one of the scientists who led the study, explained, “Many people may not realise that more human lives are lost to the tiny mosquito, more specifically malaria parasites, each year as compared to ferocious animals such as lions and sharks. After infection, malaria parasites, known for their blood-eating nature, can propagate inside the human body rapidly and consume up to 80 per cent of red blood cells in a short period of time, leading to a series of deadly symptoms.”

About 3.2 billion people–almost half of the world’s population–are considered to be at risk of malaria by the World Health Organization. As of September 2015, there were an estimated 214 million cases of malaria and 438,000 malaria-linked deaths this year alone.

Artemisinin and its derivatives are currently the most potent class of anti-malarial drugs. In recognition of its importance against malaria, the discovery of artemisinin won Chinese scientist Ms Tu Youyou the 2015 Nobel Prize in Physiology or Medicine earlier in October this year. While there have been extensive studies on artemisinin, the mechanism of the drug is not well understood.

Asst Prof Lin, together with Dr Wang Jigang, who was formerly with the NUS Department of Biological Sciences and now with the Singapore-MIT Alliance for Research & Technology, Associate Professor Kevin Tan from the Department of Microbiology and Immunology at the NUS Yong Loo Lin School of Medicine and their research team, discovered over 120 protein targets of artemisinin, and the mechanism that activates its deadly killing effect. The findings of the study are published in the journal Nature Communications on 23 December 2015.

“With artemisinin resistance in malaria parasites becoming an emerging concern, particularly in Southeast Asia, our study could potentially contribute to the design of better drugs and treatment strategies against malaria,” said Assoc Prof Tan.

Many of the newly-identified protein targets are involved in essential biological processes in the parasite, thus explaining its potent killing effect. Through its promiscuous targeting mechanism, artemisinin targets the blood-eating nature of the malaria parasite, binding to a broad spectrum of targets simultaneously, and fatally disrupting the biochemistry of the parasite.

The study also showed that the main activator of artemisinin is haem, a specific iron-containing compound, either biosynthesised by the parasite at its early developmental ring stage, or derived from haemoglobin digestion in the later stages.

The drug activation level was found to be much lower in ring stage parasites, given that artemisinin activation requires haem, which is of much lower abundance and is biosynthesised by the parasite. In comparison, during the late stages of its life cycle, the parasite actively digests the haemoglobin in infected blood cells as its primary energy source. This releases large amounts of haem, and the drug is thus able to specifically respond to parasite-infected cells and effectively attack the disease-causing parasites.

Paving the way for new treatment strategies against malaria

Asst Prof Lin added, “The current findings not only provide a more complete picture of how artemisinin and its derivatives work, but also suggest new ways of using the drug. For instance, to improve drug activation at ring stage, we can explore enhancing the level of haem biosynthesis in the parasite. By understanding that haemoglobin digestion releases huge amount of haem, which brings about the effective killing mechanism in the later stages, we can also consider prolonging the treatment time to ensure that the drug can effectively kill the parasite through multiple cycles.”

The team will be collaborating with researchers from NUS’ Department of Chemical and Biomolecular Engineering to develop novel artemisinin analogues with more specific targeting properties.

“Moving forward, structural biology and physicochemical studies will help us to understand how exactly the drug binds to its protein targets and how these modifications of proteins affect their structures and hence their functions,” said Dr Wang.