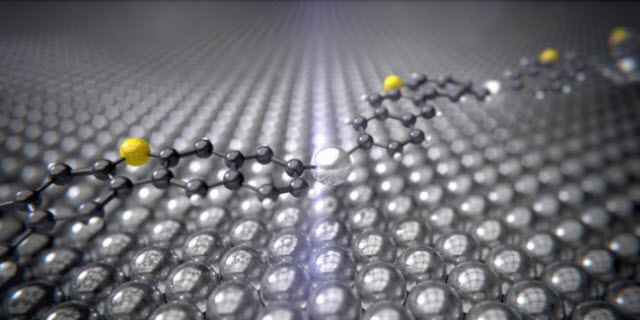 The intermediate product of the Ullmann reaction with the silver catalyst (silver) between the carbon rings (black) and sulfur atoms (yellow) curves like a bridge over the silver surface.Image Courtesy of: University of Basel, Department of Physics

Physicists at the University of Basel have succeeded in watching a silver catalyst at work for the first time with the aid of an atomic force microscope. The observations made during an Ullmann reaction have allowed the researchers to calculate the energy turnover and, potentially, to optimize the catalysis. The study, which was performed with experts from Japan and Iran, has been published in the scientific journal Small.

The Ullmann reaction examined is a chemical reaction in which silver atoms catalyze the bond between two carbon atoms to which iodine was previously bonded. Although scientists have known about this type of reaction since 1901 and used it for many important chemical conversions, it was not previously possible to observe the intermediate product of the reaction in detail.

Related Article: For this Nanocatalyst, One Atom Makes a Big Difference

Using an atomic force microscope, the team of researchers led by Professor Ernst Meyer and Dr. Shigeki Kawai from the Swiss Nanoscience Institute and the Department of Physics at the University of Basel has now succeeded in displaying this reaction at atomic resolution.

Surprisingly, it was revealed that the silver atoms react with the molecules at temperatures of around -120°C and seem to curve like a bridge over a river. In the second stage of the reaction, which requires the temperature to be increased to around 105°C and generates the end product, the silver atoms are freed again and two carbon atoms bond together.

The Ullmann reaction has been used for chemical syntheses for a long time now. Interest in this linking of carbon atoms has recently increased again because it can be used to bind organic molecules to surfaces and produce solvent-free polymers. Detailed observations of how the catalysts work enable scientists to better understand the reaction process.

Previous analyses failed to show the spatial arrangement of the organometallic intermediate product. The detailed images now obtained are the first to allow project partner Professor Stefan Goedecker (Department of Physics, University of Basel) to calculate the energy turnover of the Ullmann reaction examined. This data confirms the unusual spatial arrangement of the intermediate product and indicates how the reaction could be optimized.

The observed curving and flexibility of the molecules is probably the reason why the reaction requires relatively low temperatures of 105°C. The molecules are subject to mechanical tension and can therefore react more easily, that is at lower temperatures. If other catalysts could be used to generate intermediate products like these that are subject to tension, then catalytic reactions could also be possible at lower temperatures. This would make ecological and economic sense because traditional catalysts with platinum, rhodium, or palladium often require high operating temperatures of 500°C, which leads to the emission of waste gases in a cold state.