Feb 18, 2020|3 min readMax Planck Institute for Evolutionary Anthropology
The movie demonstrates that an endocast is the cast of the internal bony brain case approximating brain size and shape and then oscillates between a symmetric and asymmetric shape to emphasize the asymmetry pattern that is shared in humans, chimpanzees, gorillas, and orangutans. This pattern includes a more backwards projecting left hemisphere, a more forward projecting right hemisphere, differential projections of the cerebellar lobes and the temporal poles.
Simon Neubauer, CC BY-NC-ND 4.0

The left and right side of our brain are specialized for some cognitive abilities. For example, in humans, language is processed predominantly in the left hemisphere, and the right hand is controlled by the motor cortex in the left hemisphere. The functional lateralization is reflected by morphological asymmetry of the brain.

Left and right hemisphere differ subtly in brain anatomy, the distribution of nerve cells, their connectivity and neurochemistry. Asymmetries of outer brain shape are even visible on endocasts. Most humans have a combination of a more projecting left occipital lobe (located in the back of the brain) with a more projecting right frontal lobe. Brain asymmetry is commonly interpreted as crucial for human brain function and cognition because it reflects functional lateralization. However, comparative studies among primates are rare and it is not known which aspects of brain asymmetry are really uniquely human. Based on previously available data, scientists assumed that many aspects of brain asymmetry evolved only recently, after the split between the human lineage from the lineage of our closest living relatives, the chimpanzees.

The shared brain asymmetry pattern is visualized on a human endocast (cast of the internal bony braincase) in lateral view (left) and from the lower side (right). This pattern includes a more backwards projecting left hemisphere and a more forward projecting right hemisphere with localized larger surface areas (orange) in one hemisphere as compared to corresponding smaller regions (blue) in the other hemisphere. It also includes differential projections of the cerebellar lobes and the temporal poles.
Simon Neubauer, CC BY-NC-ND 4.0

In a new paper researchers from the Max Planck Institute for Evolutionary Anthropology and the University of Vienna measured the magnitude and pattern of shape asymmetry of endocasts from humans and apes. "Great ape brains are rarely available for study, but we have developed methods to extract brain asymmetry data from skulls, which are easier to access. This made our study possible in the first place," says lead author Simon Neubauer.

The team found that the magnitude of asymmetry was about the same in humans and most great apes. Only chimpanzees were, on average, less asymmetric than humans, gorillas, and orangutans. They also investigated the pattern of asymmetry and could demonstrate that not only humans, but also chimpanzees, gorillas, and orangutans showed the asymmetry pattern previously described as typically human: the left occipital lobe, the right frontal lobe, as well as the right temporal pole and the right cerebellar lobe projecting more relatively to their contralateral parts. 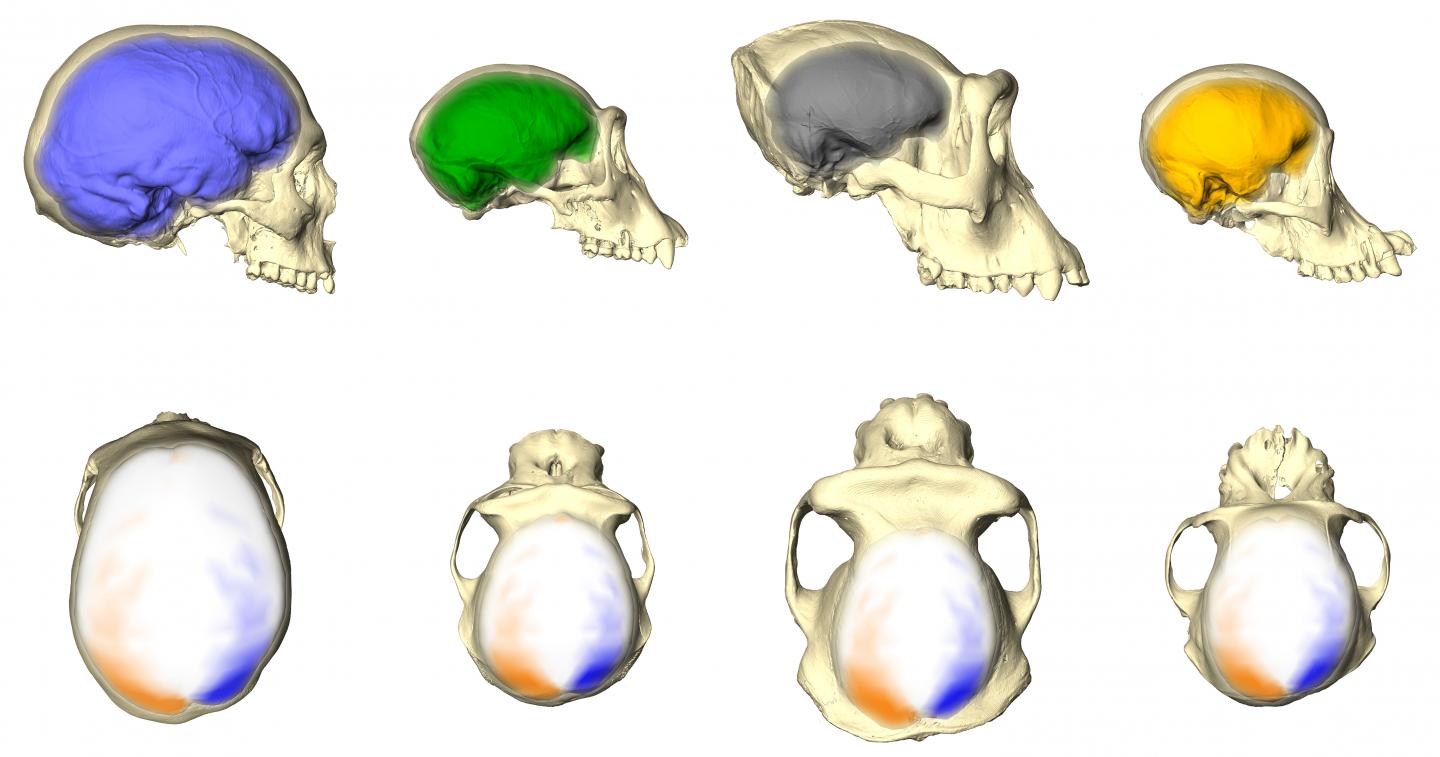 Humans, chimpanzees, gorillas, and orangutans (from left to right) have differently shaped endocasts and brains (see top row). But they share an asymmetry pattern, as visualized in the bottom row. This pattern includes a more backwards projecting left hemisphere and a more forward projecting right hemisphere with localized larger surface areas (orange) in one hemisphere as compared to corresponding smaller regions (blue) in the other hemisphere.
Simon Neubauer, CC BY-NC-ND 4.0

"What surprised us even more was that humans were least consistent in this asymmetry with a lot of individual variation around the most common pattern," says Philipp Mitteroecker, a co-author of the study. The authors interpret this as a sign of increased functional and developmental modularization of the human brain. For example, the differential projections of the occipital lobe and the cerebellum are less correlated in humans than in great apes. This finding is interesting because the cerebellum in humans underwent dramatic evolutionary changes and it seems that thereby its asymmetry was affected as well.

The finding of a shared asymmetry pattern but greater variability in humans is intriguing for the interpretation of human brain evolution. An endocast of one of our fossil ancestors that shows this asymmetry can no longer be interpreted as evidence for human-specific functional brain lateralization without other (archaeological) data.

"This shared asymmetry pattern of the brain evolved already before the origin of the human lineage," explains Philipp Gunz, a co-author of the study. Humans seem to have built upon this morphological pattern to establish functional brain lateralization related to typical human behaviors."

- This press release was originally published on the Max Planck website