COLLEGE PARK, MD — Engineers at the University of Maryland's A. James Clark School of Engineering have created a novel technological solution to the pressing global challenge of water scarcity by creating a suite of solar steam generation devices that are at once efficient, easily accessible, environmentally friendly, biodegradable, and extremely low cost. 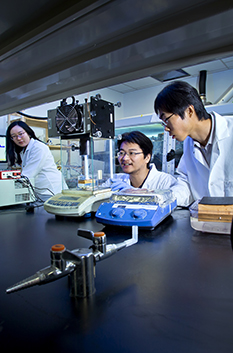 Photo courtesy of the University of MarylandInspired by the process by which water is carried through trees from roots to small pores on the underside of leaves, the UMD research team created several new ways in which water can be transported through wood, purifying it for safe use. Energy from the sun and a block of wood smaller than an adult’s hand are the only components needed to heat water to its steaming point in these devices.

The global crisis of water scarcity is a pressing global challenge, and the situation is far worse in developing countries, where safe water is difficult to secure for 1 billion people.

“Cost and manufacturing are key challenges in using the solar-steam technology for seawater desalination and for the first time, wood-based structures can potentially provide solutions,” said Liangbing Hu, UMD associate professor of materials science and engineering and the leader of the projects. Hu is interested in scaling up these devices for commercial use, which includes designing ways to easily manufacture the devices and bring down their cost. The team is racing other research groups to invent a successful solar steam generation device that is cost efficient and easy to use.  He is also a member of the University of Maryland Energy Research Center and the Maryland NanoCenter, where the devices were studied closely.

The team is trying out a few twists on the basic idea of using a darkened surface on the wood to heat the water, then pulling it through the wood’s natural porous structures.

Picture a bowl of unpurified water sitting in a sunny spot. On top of it floats a small block of wood about two inches by two inches. The side of the block facing up is darkened, to catch the sun's rays. As the sun heats the wood, the water below is drawn up through the wood’s natural channels. The hot dark surface evaporates the water, which can be condensed and distilled off. The salt or other contaminants are too heavy to evaporate, so they stay below.

One design, as published in the journal Advanced Materials, uses carbon nanotubes—tiny, naturally dark structures grown in a lab—to coat one side of the wood and heat the water inside.  Another, described in the journal Advanced Energy Materials, uses metal nanoparticles to achieve the same results. Both of these designs are very efficient, but come with a higher cost to produce.

Another innovative design involves carbonizing—essentially, burning—the top layer of wood to create a dark surface. The team tried this with the natural wood’s channels oriented up-and-down, just as they would be inside the tree (described in another paper, published Oct. 10 in Advanced Materials).

By the same measure used to test solar cells’ efficiency, the team measured how efficient the solar steam generation devices are. The most efficient device was the burned-top wood, with 87 percent efficiency at ten suns of light. It was also the least expensive to produce, coming in at only $1 per square meter.

Though they may not best the efficiency or cost lists, the other devices also have their advantages. The carbon nanotube-topped version is also flexible, because the component that makes wood stiff, lignin, was removed. It could be rolled into a tube. The device coated with metal nanoparticles showed a self-cleaning aspect when it was placed in salt water. During the day, the salt was too heavy to evaporate and was left behind. During the simulated night (12 hours without sunlight) the salt dissolved off the wet surface.

Photos of the wood's surface before and after any darkening agent was added were produced in the Advanced Imaging and Microscopy (AIM) Lab, part of the Maryland Nanocenter, which is headquartered in College Park.