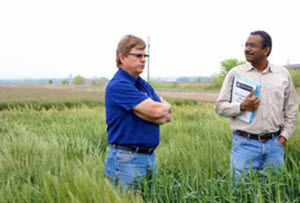 Ibrahim and Jackie Rudd in the field at Castroville, Texas.Photo provided by Amir IbrahimWheat, from breads and pastries to beer and pastas, is an integral part of diets. Farmers produced about 730 million tons of wheat globally in 2014. It serves as the staple food for more than 35 percent of the world’s population – around 2.5 billion people – according to the United Nations Food & Agriculture Organization.

But wheat is vulnerable. Among the most damaging diseases that affect wheat crops across the world are rusts. The fungi that cause stem rust, leaf rust and stripe rust belong to the genus Puccinia. These parasites cannot grow without infecting a host plant, and are responsible for some of the greatest destructions of crops in human history.

Wheat rusts have a bulls’ eye target over Texas. “It can overwinter here as it doesn't usually get cold enough to kill it,” says Amir Ibrahim, a professor in the Soil and Crop Sciences Department at Texas A&M University.

The windblown spores of Puccinia can travel great distances and quickly adapt to host plant resistance. Their adaptability makes breeding new resistant cultivars of wheat a priority for researchers like Ibrahim.

Ibrahim and his colleagues have recently released a cultivar of winter wheat – TAM 305 – that is resistant to many of the rust fungi.

“It's a natural resistance,” says Ibrahim. “We make (genetic) crosses to incorporate the right genes needed for resistance.” Even under optimal environmental conditions for rusts and the presence of virulent strains, plants with strong resistance can do well, he says.

TAM 305 is resistant to stem and leaf rust. Adult plants are resistant to stripe rust as well, although seedlings did show some susceptibility. There may be some symptoms in the field but those symptoms do not spread very fast, and the crop can be harvested without significant loss.

Ibrahim and his colleagues select for durable resistance. This is like building an obstacle course. Instead of having to overcome one major resistance factor, the rust fungi face plants that have a number of weaker, or minor, resistance genes. “It is difficult for one kind of rust pathogen to overcome this kind of resistance,” says Ibrahim. 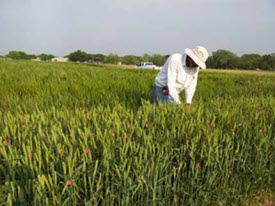 Ibrahim tagging wheat plant heads at Castroville, Texas.Photo provided by Amir IbrahimThe benefits of growing resistant cultivars of wheat in Texas spread beyond the state. “It warms up earlier in Texas than in other states, and the germination of the Puccinia spores begins earlier as well,” says Ibrahim. “These spores are then blown by the wind to states like Oklahoma, Nebraska, Kansas, the Dakotas and other wheat growing areas.” If the spread of rusts isn’t controlled in Texas, wheat crops across the continent can be affected.

In fact, farmers across North America have been battling wheat rusts for over a century. In 1904, stem rust destroyed more than half the harvest in South Dakota, then considered the wheat center of the world. Three epidemics of stem rust from 1939-1941 destroyed wheat crops in the Yaqui Valley of Mexico. Agricultural scientists such as Edgar McFadden and Norman Borlaug – who won the Nobel Peace Prize in 1970 – have led efforts to breed cultivars of wheat resistant to infection by rusts. But new strains continue to rise and threaten crops across the world.

TAM 305 is now being adopted by farmers in its target area. It has excellent yield and generally good quality for use by bakers and other commercial end users.

One of the challenges breeders face is trying to improve yield and quality while maintaining resistance. “Every time you introduce new sources of resistance, you might bring along other genes that could reduce yield or quality,” says Ibrahim.

With TAM 305 as a parent, Ibrahim is now developing resistant, high quality strains of winter wheat.

The development of TAM 305 resulted from work done by the Texas A&M AgriLife Wheat Improvement Team, USDA-ARS, and various other universities, with collaboration from Jackie Rudd. The Texas Wheat Producers Board and Texas A&M AgriLife Research funded this project.

Ibrahim’s research is published in the Journal of Plant Registrations.