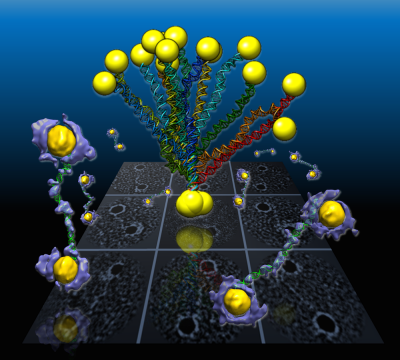 In a Berkeley Lab-led study, flexible double-helix DNA segments connected to gold nanoparticles are revealed from the 3-D density maps (purple and yellow) reconstructed from individual samples using a Berkeley Lab-developed technique called individual-particle electron tomography or IPET. Projections of the structures are shown in the background grid.Image Credit: Berkeley LabAn international team working at the Department of Energy’s Lawrence Berkeley National Laboratory (Berkeley Lab) has captured the first high-resolution 3D images from individual double-helix DNA segments attached at either end to gold nanoparticles. The images detail the flexible structure of the DNA segments, which appear as nanoscale jump ropes.

This unique imaging capability, pioneered by Berkeley Lab scientists, could aid in the use of DNA segments as building blocks for molecular devices that function as nanoscale drug delivery systems, markers for biological research, and components for computer memory and electronic devices. It could also lead to images of important disease-relevant proteins that have proven elusive for other imaging techniques, and of the assembly process that forms DNA from separate, individual strands.

The shapes of the coiled DNA strands, which were sandwiched between polygon-shaped gold nanoparticles, were reconstructed in 3D using a cutting-edge electron microscope technique coupled with a protein-staining process and sophisticated software that provided structural details to the scale of about 2 nanometers, or two billionths of a meter.

“We had no idea about what the double-strand DNA would look like between the nanogold particles,” said Gang “Gary” Ren, a Berkeley Lab scientist who led the research. “This is the first time for directly visualizing an individual double-strand DNA segment in 3D,” he said. The results were published in the March 30 edition of Nature Communications.

The method developed by this team, called individual-particle electron tomography (IPET), had earlier captured the 3D structure of a single protein that plays a key role in human cholesterol metabolism. By grabbing 2-D images of the same object from different angles, the technique allows researchers to assemble a 3D image of that object. The team has also used the technique to uncover the fluctuation of another well-known flexible protein, human immunoglobulin 1, which plays a role in our immune system.

Ren explained that the naturally flexible dynamics of samples, like a man waving his arms, cannot be fully detailed by any method that uses an average of many observations.

A popular way to view the nanoscale structural details of delicate biological samples is to form them into crystals and zap them with X-rays, though this does not preserve their natural shape and the DNA-nanogold samples in this study are incredibly challenging to crystallize. Other common research techniques may require a collection of thousands near-identical objects, viewed with an electron microscope, to compile a single, averaged 3D structure. But this 3D image may not adequately show the natural shape fluctuations of a given object.

The samples in the latest experiment were formed from individual polygon gold nanostructures, measuring about 5 nanometers across, connected to single DNA-segment strands with 84 base pairs. Base pairs are basic chemical building blocks that give DNA its structure. Each individual DNA segment and gold nanoparticle naturally zipped together with a partner to form the double-stranded DNA segment with a gold particle at either end.

The samples were flash-frozen to preserve their structure for study with cryo-EM imaging, and the distance between the two gold particles in individual samples varied from 20-30 nanometers based on different shapes observed in the DNA segments. Researchers used a cryo-electron microscope at Berkeley Lab’s Molecular Foundry for this study.

They collected a series of tilted images of the stained objects, and reconstructed 14 electron-density maps that detailed the structure of individual samples using the IPET technique. They gathered a dozen conformations for the samples and found the DNA shape variations were consistent with those measured in the flash-frozen cryo-EM samples. The shapes were also consistent with samples studied using other electron-based imaging and X-ray scattering methods, and with computer simulations.

While the 3D reconstructions show the basic nanoscale structure of the samples, Ren said that the next step will be to work to improve the resolution to the sub-nanometer scale. 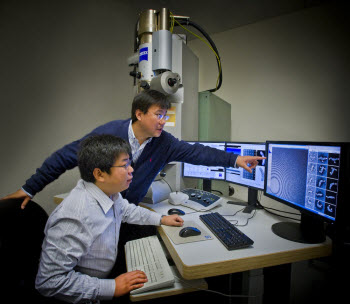 Gang Ren (standing) and Lei Zhang participated in a study at Berkeley Lab’s Molecular Foundry that produced 3-D reproductions of individual samples of double-helix DNA segments attached to gold nanoparticles.Photo credit: Roy Kaltschmidt/Berkeley Lab“Even in this current state we begin to see 3D structures at 1- to 2-nanometer resolution,” he said. “Through better instrumentation and improved computational algorithms, it would be promising to push the resolution to that visualizing a single DNA helix within an individual protein.”

The technique, he said, has already excited interest among some prominent pharmaceutical companies and nanotechnology researchers, and his science team already has dozens of related research projects in the pipeline.

In future studies, researchers could attempt to improve the imaging resolution for complex structures that incorporate more DNA segments as a sort of “DNA origami,” Ren said. Researchers hope to build and better characterize nanoscale molecular devices using DNA segments that can, for example, store and deliver drugs to targeted areas in the body.

“DNA is easy to program, synthesize and replicate, so it can be used as a special material to quickly self-assemble into nanostructures and to guide the operation of molecular-scale devices,” he said. “Our current study is just a proof of concept for imaging these kinds of molecular devices’ structures.”

The Molecular Foundry is a DOE Office of Science User Facility.

In addition to Berkeley Lab scientists, other researchers contributing to this study were from UC Berkeley, the Kavli Energy NanoSciences Institute at Berkeley Lab and UC Berkeley, and Xi’an Jiaotong University in China.