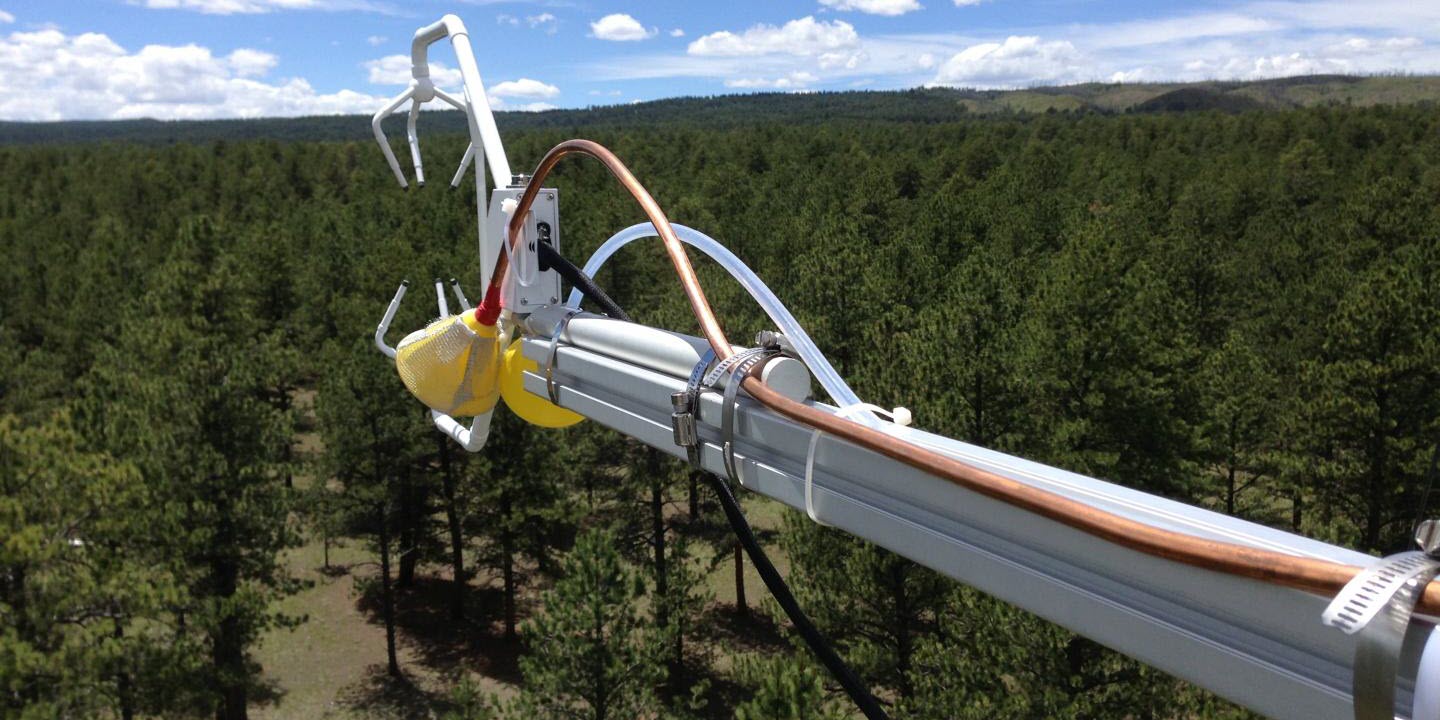 Instrumentation inlets and the view from the top of the tower at the Manitou Experimental Forest Observatory near Woodland Park, Colorado.
Delphine Farmer, CSU

Smoke from the many wildfires burning in the West have made air quality hazardous for millions of people in the United States. And it is the very tiniest of the aerosol particles in that air that make it particularly harmful to human health. But for decades, we haven't known how long these particles actually stay aloft.

New research by Colorado State University scientists is giving us a much better understanding of this process, which can help not only in air quality forecasting, but also in global climate modeling.

Aerosol particles, whether from wildfire smoke or car exhaust, play a large role in how much heat is absorbed or deflected by the atmosphere. However, we haven't entirely understood how quickly these tiny particles were pulled out of the air—especially in the absence of moisture. This has added substantial uncertainty to already-complex climate models.

Delphine Farmer, an associate professor in the Department of Chemistry in the CSU College of Natural Sciences, knew it was time we could do better.

Farmer and her colleagues recently announced that they have been able to detect, in real-world environments—from forests to grasslands—the rate at which these important particles actually leave the atmosphere. Their findings first appeared online the week of Oct. 5 in the Proceedings of the National Academy of Sciences.

"This work really highlights the importance and power of field measurements," Farmer said. "We can directly use observations from field studies to narrow the uncertainties in climate models, and to improve our understanding of climate-relevant processes."

Zeroing in on uncertainty

Aerosol particles fall out of the air in two main ways. The first and most common is known as "wet" deposition, when moisture plucks them out of the air, whether through cloud formation, snow, or rainfall. Scientists have had a fairly good handle on this force, which accounts for some 80 percent of the aerosol effect in the atmosphere.

But the other force, "dry" deposition, has been much more mysterious, although it plays a not-insignificant role globally. Because aerosols are so small (measured in nanometers and microns) they don't simply come tumbling down due to gravity. They can waft along in currents of air for a long time. Just how long, however, has been the question.

"When a particle is emitted into the atmosphere, the amount of time it hangs out in the air depends on these removal processes," Farmer said. This is crucial, she explained, because "the longer a particle hangs out in the atmosphere, the more opportunity it has to travel farther, or make clouds, or impact human health. So getting the removal process right is essential for predicting particle concentrations—and their effects."

Early results from theoretical calculations in the 1970s and '80s, and cruder measurements completed over smooth surfaces around 2000, have been fed into climate models for decades.

This is where Farmer, who has made a research career tracking atmospheric chemistry with high-resolution instruments, saw an opportunity for improvement.

Farmer and her colleagues knew that, of course, the land—and even ocean—surface isn't all smooth. So they wanted to see what was actually happening to these particles in the real world.

In particular, they looked at the forces beyond gravity that were driving these aerosols' journeys. "For the small, climate- and health-relevant particles, turbulence in the atmosphere brings particles down to surfaces and allows those particles to get stuck," Farmer said.

And because of this, these small particles don't have a straight path to a surface—especially in a complex surface environment like a forest. Farmer explained it as each microscopic aerosol particle running its own gauntlet, "kind of like American Ninja Warrior, where the particle has to avoid hitting different obstacles in order to stay in the atmosphere. And each gauntlet is particularly challenging for different sizes of particles."

To see how these variously sized particles were faring in this obstacle course, the researchers deployed an ultra-high sensitivity aerosol spectrometer, which uses a laser to count particles. They set up measuring stations in a pine forest in the Manitou Experimental Forest in Colorado, and in grasslands in the Southern Great Plains in Oklahoma, to capture real-world data on these particles as they eventually landed.

The new findings can be applied to all sorts of uneven surfaces, from forests to grasslands to agricultural areas even to choppy seas.

"It turns out that the particles' race to settle on a surface is pretty important for predicting radiative effects" and what the future climate might look like, Farmer said.

Their new data also suggests we've been underestimating the amount of the aerosols in the air that are most harmful to human health, those smaller than 2.5 nanometers (also known as PM2.5), which are, for example, the most commonly hazardous part of wildfire smoke.

"Our revised [number] increases surface PM2.5 concentrations by 11 percent globally and 6.5 percent over land," Farmer and her collaborators wrote in their new paper. Which is important to know because "exposure to PM2.5 is linked to respiratory and cardiovascular diseases."

Coauthors on the study included Jeffery Pierce, an associate professor in the Department of Atmospheric Sciences in the Walter Scott, Jr. College of Engineering, and Kelsey Bilsback, a postdoctoral researcher there; as well as doctoral researchers in the Department of Chemistry Ethan Emerson, Anna Hodshire, and Holly DeBolt; and Gavin McMeeking from the Handix Scientific company in Boulder.

"To me, the most exciting aspect of this work is that we are able to take real-world measurements over a forest and a grassland site and use them to directly improve our understanding of the climate system," Farmer said.

- This press release was originally published on the CSU website