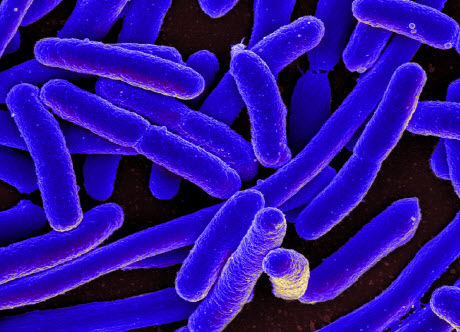 Colorized scanning electron micrograph of Escherichia coli, grown in culture and adhered to a cover slip.Image credit: Flickr.com user NIAIDANN ARBOR—Microbes that can reproduce rapidly in times of plenty have an evolutionary stockpile of extra genes that allows them to quickly respond to changing conditions such as oil spills or outbreaks of intestinal diseases.

Energy-hoarding bacteria, on the other hand, have far fewer copies of the genes used to make ribosomes, the tiny factories that assemble amino acids into proteins inside cells.

"Much like the number of pistons in an internal-combustion engine is a proxy for the tradeoff between power and efficiency in motor vehicles, we found that the number of genes that make ribosomes is indicative of ecological strategies of bacteria that favor either rapid or efficient growth," said University of Michigan microbiologist Thomas Schmidt.

Related Article: Some Bacteria Have Lived in the Human Gut Since Before We Were Human

"To our knowledge, this is the first robust evidence linking the number of these ribosomal genes to bacterial growth rate and growth efficiency. These findings help establish a foundation for predicting the behavior of microbes in response to the expanding impact of human activities on microbiomes—those associated with the human body as well as in other environments."

The results are summarized in a paper published online Sept. 12 in the journal Nature Microbiology.

The findings move scientists a step closer to the goal of building predictive models of how complex communities of microbes will behave under various conditions, Schmidt said. That was one of the challenges posed to researchers in May when the White House Office of Science and Technology Policy launched the National Microbiome Initiative, an effort to foster the integrated study of microbiomes across different ecosystems.

Schmidt, a professor in the U-M Department of Ecology and Evolutionary Biology and at the Medical School, attended the May event. U-M is part of the initiative, having committed $3.5 million to the Michigan Microbiome Project, which aims to drive discoveries on how to manipulate the structure and function of the microbiome in the human gut through dietary interventions and to involve undergraduates in authentic research.

In the growth-rate study, Schmidt and his colleagues conducted a comparative analysis of genomes from 1,167 bacterial species. In each genome, they counted the number of copies of the genes that code for the RNA molecules in ribosomes. The number of copies varied from 1 to 15 per bacterial genome.

They found that the maximum bacterial growth rate doubles with a doubling of the copy number, while bacterial species that make efficient use of carbon have far fewer copies of the ribosomal RNA genes.

The number of ribosomal RNA genes in bacterial genomes "predicts two important components of reproduction—growth rate and growth efficiency," the authors wrote. "These insights...will be essential if we are to ever manage microbiomes for human and environmental health."

Previous studies showed that soon after the 2010 Deepwater Horizon oil spill, there was a bloom of hydrocarbon-degrading bacteria containing nine copies of the ribosomal RNA genes. In terrestrial environments, bacteria that responded quickest to the addition of 2,4-D, an herbicide that is metabolized by bacteria, had more copies of the ribosomal RNA genes than those that responded slowly.

Microbes are the most abundant life forms on Earth. They maintain the planet's atmosphere, drive essential processes in terrestrial and aquatic ecosystems, and have formed intimate relationships with all plants and animals.

Microbiomes are the communities of microorganisms that live on and in people, plants, soil, oceans and the atmosphere. Microbiomes maintain healthy function of diverse ecosystems, influencing human health, climate change, food security and other factors.

Support for the work was provided by the U.S. Department of Energy, the National Science Foundation and the National Institutes of Health.