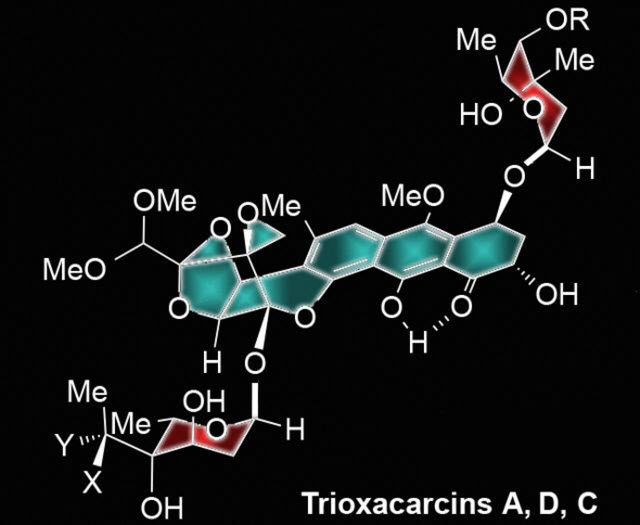 A schematic shows a trioxacarcin C molecule, whose structure was revealed for the first time through a new process developed by the Rice lab of synthetic organic chemist K.C. Nicolaou. Trioxacarcins are found in bacteria but synthetic versions are needed to study them for their potential as medications. Trioxacarcins have anti-cancer properties.Image Courtesy of: Nicolaou Group/Rice University

HOUSTON—A team led by Rice University synthetic organic chemist K.C. Nicolaou has developed a new process for the synthesis of a series of potent anti-cancer agents originally found in bacteria.

The Nicolaou lab finds ways to replicate rare, naturally occurring compounds in larger amounts so they can be studied by biologists and clinicians as potential new medications. It also seeks to fine-tune the molecular structures of these compounds through analog design and synthesis to improve their disease-fighting properties and lessen their side effects.

Such is the case with their synthesis of trioxacarcins, reported this month in the Journal of the American Chemical Society. 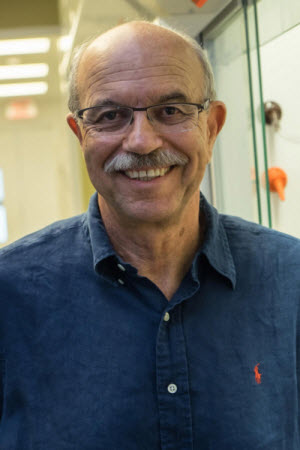 K.C. Nicolaou.Photo Courtesy of: Rice University"Not only does this synthesis render these valuable molecules readily available for biological investigation, but it also allows the previously unknown full structural elucidation of one of them," Nicolaou said. "The newly developed synthetic technologies will allow us to construct variations for biological evaluation as part of a program to optimize their pharmacological profiles."

At present, there are no drugs based on trioxacarcins, which damage DNA through a novel mechanism, Nicolaou said.

Trioxacarcins were discovered in the fermentation broth of the bacterial strain Streptomyces bottropensis. They disrupt the replication of cancer cells by binding and chemically modifying their genetic material.

"These molecules are endowed with powerful anti-tumor properties," Nicolaou said. "They are not as potent as shishijimicin, which we also synthesized recently, but they are more powerful than taxol, the widely used anti-cancer drug. Our objective is to make it more powerful through fine-tuning its structure."

He said his lab is working with a biotechnology partner to pair these cytotoxic compounds (called payloads) to cancer cell-targeting antibodies through chemical linkers. The process produces so-called antibody-drug conjugates as drugs to treat cancer patients. "It's one of the latest frontiers in personalized targeting chemotherapies," said Nicolaou, who earlier this year won the prestigious Wolf Prize in Chemistry.

The Cancer Prevention and Research Institute of Texas, the Welch Foundation, and Rice University supported the research.