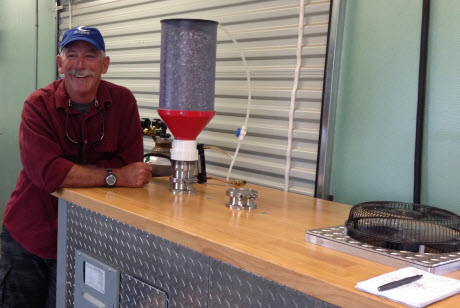 James Holm (pictured) and Swaminathan Ramesh, PhD, teamed up to develop a mobile reactor (also pictured) to convert waste plastic into fuel.Photo Credit: Claudia RochaSAN FRANCISCO — Billions of pounds of plastic waste are littering the world’s oceans. Now, a PhD organic chemist and a sailboat captain report that they are developing a process to reuse certain plastics, transforming them from worthless trash into a valuable diesel fuel with a small mobile reactor. They envision the technology could someday be implemented globally on land and possibly placed on boats to convert ocean waste plastic into fuel to power the vessels.

The researchers presented their results Apr. 3 at the 253rd National Meeting & Exposition of the American Chemical Society (ACS). ACS, the world’s largest scientific society, is holding the meeting here through Thursday. It features more than 14,000 presentations on a wide range of science topics.

A sailor for 40 years, James E. Holm says he has watched the sea and coastline become more and more polluted. “A few years ago, I was sailing through the Panama Canal, and when I stopped at an island on the Atlantic side, I was stunned by the amount of plastic covering the beach. I thought if I had a chance to do something about it, I should.”

His partner, Swaminathan Ramesh, PhD, was driven by the desire and excitement of searching for a new “killer idea” with the power to change the world. Ramesh took early retirement in 2005 from BASF after 23 years as a research chemist and began looking for new opportunities. Ramesh formed EcoFuel Technologies and coupled his chemical knowledge with Holm’s concerns about plastic wastes and ocean pollution. In the meantime, Holm had formed Clean Oceans International, a nonprofit organization.

They sought to optimize a technology that can use waste hydrocarbon-based plastics as a feedstock for valuable diesel fuel. Their goal was to rid the world of plastic waste by creating a market for it.

For years, Ramesh explains, pyrolysis technologies have been used to break down or depolymerize unwanted polymers, such as plastic wastes, leaving a hydrocarbon-based fuel. But the process usually calls for complex and costly refining steps to make the fuel useable.

Ramesh set out to change the game and developed a metallocene catalyst deposited on a porous support material that, coupled with a controlled pyrolysis reaction, yields diesel fuels directly without further refining. It is also cost-effective on a small scale, runs at lower temperatures and is mobile.

“The catalyst system also allows us to perform the pyrolysis as a continuous-feed process and shrink the footprint of the whole system,” Ramesh says. “We can scale the capacity to handle anywhere from 200 pounds per 10-hour day to 10,000 or more pounds per 10-hour day. Because of its small size, we also can take the technological process to where the plastic wastes are.” The whole system can fit in a 20-foot shipping container or on the back of a flat-bed truck, Holm says.

The next step, they say, is to show the technology works well and that it can create a useable drop-in diesel fuel. They will soon conduct a demonstration project for the government of the city of Santa Cruz, California. Officials there are interested in implementing the technology to address waste plastics that currently cannot be recycled, as well as to formulate diesel fuel the city can use for its vehicles, Holm adds.

“If we can get people around the world to pick this up and use it to shift waste plastics to fuel and make money, we are winning,” Holm says. “We can even eliminate plastic waste before it gets to the oceans by creating value for it locally on a global basis.”

The team has received private funding for this project. Development of the catalyst system and reactor are self-funded by Ramesh and his company EcoFuel Technologies.

The American Chemical Society is a nonprofit organization chartered by the U.S. Congress. With nearly 157,000 members, ACS is the world’s largest scientific society and a global leader in providing access to chemistry-related research through its multiple databases, peer-reviewed journals, and scientific conferences. ACS does not conduct research, but publishes and publicizes peer-reviewed scientific studies. Its main offices are in Washington, D.C., and Columbus, Ohio.