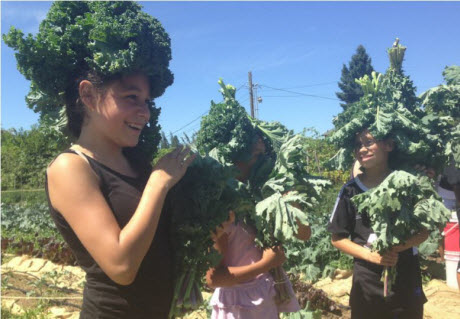 Kids get creative with kale in an urban garden in Tacoma, Washington.Photo credit: Kristen McIvorUsing compost is the single best thing you can do to protect your family from any danger associated with lead in urban soils. Good compost will also guarantee that you will have plenty of vegetables to harvest.

That’s the main finding of a paper appearing this month in the Journal of Environmental Quality. The University of Washington-led study looked at potential risks associated with growing vegetables in urban gardens and determined that the benefits of locally produced vegetables in cities outweigh any risks from gardening in contaminated soils.

“People are terrified of soils in urban areas. They always think it’s a mystery brew of toxins in the soil, but in vast majority of cases, the contamination is lead,” said lead author Sally Brown, a UW research associate professor of environmental and forest sciences.

“We’ve shown that lead is harmful by eating the dirt, not from eating the lettuce grown in the dirt.”

Previous studies have found that lead contamination and elevated levels in the bloodstream are more common in people who live in urbans areas than in rural or suburban neighborhoods. Lead can be absorbed directly from breathing in or inadvertently consuming contaminated soil or dust. Alternatively, in the ongoing crisis in Flint, Michigan, residents ingested lead through their water. 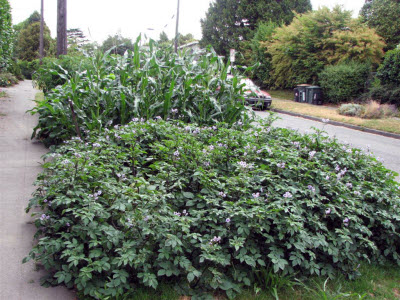 Urban gardening in Seattle’s Beacon Hill neighborhood.Photo credit: Sally BrownThe soil around older homes and under roof drip lines is most likely to have higher concentrations of lead from paint and other building materials used on older structures. These areas unfortunately often double as playgrounds, backyards and vegetable gardens in cities across the country.

A common assumption is that soil contaminated with lead is unsafe for gardening, Brown said. But with the exception of some root vegetables—carrots, turnips, radishes and beets—plants actually take up very little lead in their stems and leaves, and are safe to eat, the researchers found. It’s important to carefully wash the excess dirt from leafy vegetables and also wash your hands before eating.

Additionally, adding compost or other regulated soil amendments like biosolids will dilute any lead in the soil and may also make whatever lead that is present less likely to do harm. These products also help nourish the soil and improve the growing conditions for plants.

With carrots and these other root vegetables, there doesn’t appear to be a proportional relationship between the amount of lead in the soil and how much gets taken up by the vegetable, but that doesn’t mean you should avoid carrots. Lead is most hazardous when it enters an empty stomach, so the effects are minimal when eating these root vegetables because food is already in the stomach, Brown said.

“If you have a kid eating a carrot, that is a better-nourished kid,” she said. “Urban agriculture is just such a wonderful thing, and you shouldn’t let the fear of the soil put the kibosh on it.” 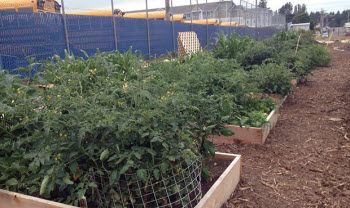 Raised garden beds in Tacoma, Washington.Photo credit: Kristen McIvorThe researchers also recommend putting a layer of compost on top of lead-contaminated soil, which significantly dilutes the lead concentration, according to several previous studies. In some instances, compost will actually render the lead insoluble, meaning it’s unlikely to be absorbed into the bloodstream if eaten.

Building a raised bed and using tested soil and compost from an outside source is another good option for urban gardening, the researchers said. As cities continue to grow and more of the U.S. population than ever before is considered food insecure (as many as 93 million people), urban gardening is a viable option to address that growing need.

Other co-authors are Rufus Chaney of the U.S. Department of Agriculture and Ganga Hettiarachchi of Kansas State University.

The study was funded by the U.S. Environmental Protection Agency.