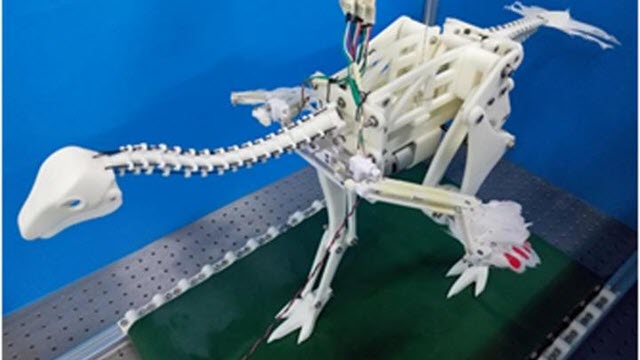 Before they evolved the ability to fly, two-legged dinosaurs may have begun to flap their wings as a passive effect of running along the ground, according to new research by Jing-Shan Zhao of Tsinghua University, Beijing, and his colleagues.

The findings, published in PLOS Computational Biology, provide new insights into the origin of avian flight, which has been a point of debate since the 1861 discovery of Archaeopteryx. While a gliding type of flight appears to have matured earlier in evolutionary history, increasing evidence suggests that active flapping flight may have arisen without an intermediate gliding phase.

To examine this key point in evolutionary history, Zhao and his colleagues studied Caudipteryx, the most primitive, non-flying dinosaur known to have had feathered "proto-wings." This bipedal animal would have weighed around five kilograms and ran up to eight meters per second.

First, the researchers used a mathematical approach called modal effective mass theory to analyze the mechanical effects of running on various parts of Caudipteryx's body. These calculations revealed that running speeds between about 2.5 to 5.8 meters per second would have created forced vibrations that caused the dinosaur's wings to flap.

Real-world experiments provided additional support for these calculations. The scientists built a life-size robot of Caudipteryx that could run at different speeds, and confirmed that running caused a flapping motion of the wings. They also fitted a young ostrich with artificial wings and found that running indeed caused the wings to flap, with longer and larger wings providing a greater lift force.

Zhao says that the next step for this research is to analyze the lift and thrust of Caudipteryx's feathered wings during the passive flapping process.