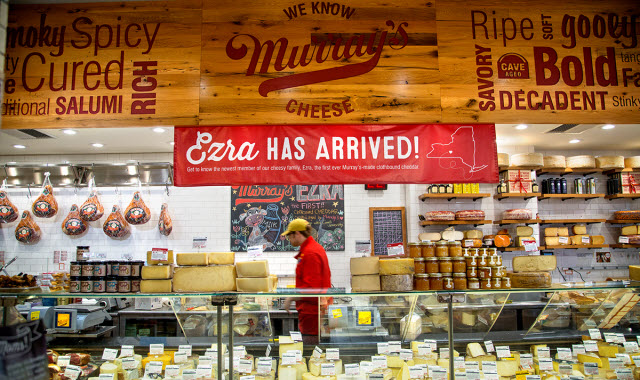 Step into your local supermarket and chances are the cheese section looks vastly different than it did just a few years ago. Artisan cheesemakers experimenting with intricate flavors and bold styles are reshaping the contours of the cheese market in New York, providing consumers with expanded choices of tastes, textures, and aromas.

And at the center of it all has been Cornell’s College of Agriculture and Life Sciences (CALS).

Cheesemakers large and small from across the Northeast have turned to CALS’ Food Processing and Development Laboratory (FPDL) for small-batch production and dairy expertise as they develop new recipes. The work is aided by a unique facility and experienced professionals available to help with all aspects of dairy food production, development, and processing.

In 2014, Murray’s Cheese in New York City had an idea for a clothbound cheddar modeled on classic British versions. But developing the unique flavor profile posed a challenge for the team from Murray’s and their partner, Old Chatham Sheepherding Creamery.

Matt Ranieri ’06, M.S. ’09, Ph.D. ’13, a food science and dairy technology expert consulting with Old Chatham, recommended the company take advantage of the resources available in CALS’ Department of Food Science. The FPDL, Ranieri knew, allowed for small-batch experimentation to solve tough research and development challenges. At Cornell they tested versions of their prototype cheese in small vats, allowing them to maintain tighter control over its development.

“The process involves a lot of variables,” said Steve Millard, Murray’s senior vice president of merchandising and operations. “We went back and forth between Holstein and Jersey milk, and we tried many different culture combinations. During the aging process, we sampled each test batch regularly to find the combination that fit our desired profile.” 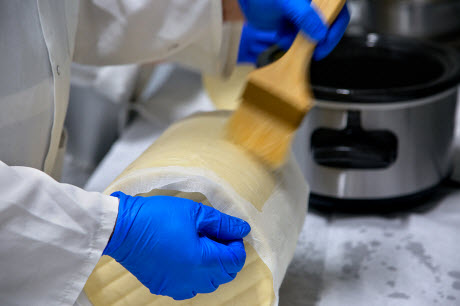 Lard is brushed on a clothbound cheddar before it is aged in Murray’s cheese caves in New York City.Photo credit: Jason Koski/University PhotographyThis spring, after two years of development, the company launched Murray’s Cavemaster Reserve Ezra—a bright, lemony flavored cheddar named with a nod to Cornell’s founder. Created with milk from cows on campus, the cheese is produced at FPDL in Stocking Hall and shipped to Murray’s, where it is wrapped in cheesecloth and rubbed with lard before being in placed in rind caves to age for 12 months. It’s the newest New York-made clothbound cheddar on the market.

Rob Ralyea, MS ’98, senior extension associate and general manager of FPDL, said Cornell’s lab offers many advantages for the New York state dairy industry to help companies like Murray’s get their products on the market.

“Most commercial vats hold about 30,000 pounds. Here at Cornell we can do small volume runs of 50 gallons, and we can do it by hand, allowing us to understand what’s going on throughout the process,” Ralyea said. “The investment in research and development is smaller for our clients, and they don’t have to lose days of production as they develop a new product.”

The flexibility of the space allows cheesemakers to start small as they tweak recipes and scale up production when needed. FPDL also holds workshops on milk, cheese, yogurt, food safety, and sanitation, and they are developing their own cheese lines, including an established favorite, Big Red Cheddar.

“It’s rewarding to see something go from idea to shelf,” Ralyea said. “That’s what our work is all about.” 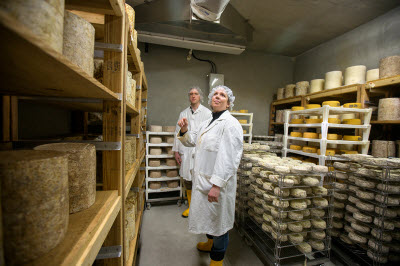 Caves master PJ Jenkelunas, rear, and his assistant, Krista Jacobsen '96, inspect cheese in the company’s cheese caves in New York City.Photo credit: Jason Koski/University PhotographySmall producers can make a big impact in representing the entire cheese industry, according to Ranieri, who co-founded the Cornell Cheese Club as a doctoral student working on extending the shelf life of fluid milk.

“We certainly have the market and incredible agriculture in New York, and there are excellent resources at Cornell,” he said. “I knew that if we combined those things, we could develop a top product, achieving a new flavor category not as typical to cheddar.”

Where a typical cheddar cheese is aged in cryovac plastic meant to prohibit the growth of molds, the clothbound cheddar is aged under conditions that promote the growth of molds and more complex flavor development, according to Ranieri.

Artisan cheeses are not only a boon for producers and consumers, but they also help improve farm viability, Ranieri said. Farmers can add value to their existing products by manufacturing higher quality raw material to be used by artisan producers, he said.

Ezra is a prime example.

“All the elements of this cheese hit on a New York theme,” Millard said. “We use New York state milk, we get our lard from New York pigs, we age it in New York City, and of course it was developed at Cornell.”

Jennifer Savran Kelly is a writer for the College of Agriculture and Life Sciences. 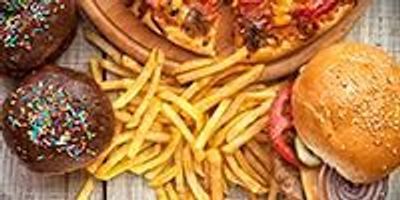 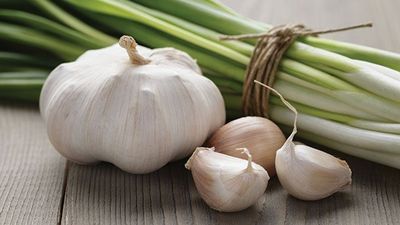 The Challenges of Analyzing Flavors in Foods

The Challenges of Analyzing Flavors in Foods