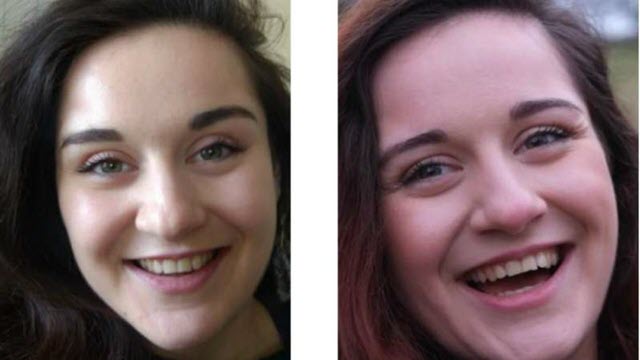 It is easier to match images of smiling facesCredit: University of York

A fulsome smile in a photo makes it easier for people to identify the individual, say researchers at the University of York.

Previous research at York has shown that it is difficult for people to match a pair of unfamiliar faces in photographs, presenting significant issues for authorities to spot identity fraud. Research has also shown that new face morphing technology can not only deceive human eyes, but smartphone software as well.

To improve accuracy rates, research led by Dr. Mila Mileva at the University's Department of Psychology looked into the possibility that a smiling image of a person could be more easily matched to a different image of that same individual, as well as more easily distinguished from an image of a similar-looking identity.

Dr. Mileva said: "Photo ID is a significant part of our lives and yet we know that the human brain has a hard time matching photos of people to other photos and matching photos with the real-life person. Identity fraud is a real problem on many levels, so it is important that we do more research in this area to see how we can improve methods of identification."

The team conducted three studies; one where 40 study participants were asked to match 60 unfamiliar images of neutral face expressions, much like a passport photo, with an open-mouth smiling face, and another where they compared neutral expressions with images of a closed smiling face.

They also asked 34 participants to match images where only the lower part of the face was visible. In all three studies, the researchers found that participants' success in matching two images of the same person was higher when an open mouth smile was displayed, as opposed to either a neutral image or a closed mouth smile.

Dr. Mileva said: "Our research suggests that replacing the neutral expression we usually use when taking identification photographs with an open mouth smile, can make face matching an easier decision.

"As soon as there's a mismatch in emotional expression—comparing a smiling and a neutral image for example—the matching accuracy drops substantially.

"We also had success in showing that an open mouth smile can help people to tell two similarly looking, but different people apart which is critical when checking photo identification."

Researchers say that an image of a smiling person at passport check points, for example, could see an improved identification success rate compared to the neutral image, but a more practical solution could be to embed a smiling picture in the chip, so that passport officials have access to both a neutral image and a smiling image to assist them in their decision-making.

The research is published in the British Journal of Psychology.