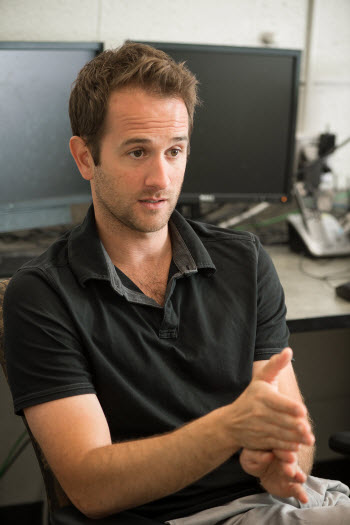 Anxiety disorders are the most common mental illness in the United States, affecting 40 million adults, and the peak time for the disorders is ages 18-25. While the research is the first scientific step toward addressing the effects of distraction on anxiety, it could eventually lead to an everyday solution.

“Down the line we could roll out an online or mobile game based on this research that specifically targets distraction and helps people stay focused and feel less anxious,” said Moser, associate professor of clinical psychology.

In the study, participants with both low and high anxiety completed a focus task in which they identified a specific shape in a series of shapes (e.g., a red circle amid red squares, diamonds and triangles). Afterward they were given an exercise designed to distract them (by mixing in different colored shapes), but it didn’t.

The focus task, Moser said, had improved concentration and lessened anxiety for the anxious participants, in particular, even after the distraction exercise.

There are a plethora of “brain-training” games on the market, Moser noted, but they are highly controversial and offer no independent scientific proof they help sharpen focus, let alone reduce anxiety.

“There have been other studies of video game-type interventions for anxiety,” he added, “but none have used a specific and simple game that targets distraction.”

The study is published online in the journal Behavior Therapy. Moser’s co-researchers are Tim Moran from MSU and Andrew Leber from Ohio State University.