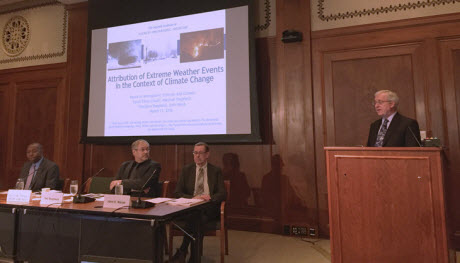 Penn State professor David Titley chaired an international committee investigating whether science can confidently link human-induced climate change with different types of extreme weather events. Here, Titley gives a public lecture on the committee's findings, which published on March 11.Image credit: Jennifer Burris Olson / National Academies of Sciences, Engineering, and MedicineUNIVERSITY PARK, Pa. -- Extreme weather events like floods, heat waves, and droughts can devastate communities and populations worldwide. Recent scientific advances have enabled researchers to confidently say that the increased intensity and frequency of some, but not all, of these extreme weather events is influenced by human-induced climate change, according to an international National Academies of Science, Engineering, and Medicine report released Mar. 11.

"In the past, many scientists have been cautious of attributing specific extreme weather events to climate change. People frequently ask questions such as, 'Did climate change cause Hurricane Sandy?' Science can't answer that because there are so many relevant factors for hurricanes. What this report is saying is that we can attribute an increased magnitude or frequency of some extreme weather events to climate change," said David Titley, Rear Admiral (Ret.), professor of practice in Penn State's Department of Meteorology and founding director of Penn State's Center for Solutions to Weather and Climate Risk, who chaired the committee that wrote the report.

The committee found that scientists can now confidently attribute some heat waves and cold events, and to a lesser degree droughts and extreme rainfall, to human-caused climate change. Even a decade ago, many scientists argued that research could not confidently tie any specific weather events to climate change, which the committee reports today is no longer true today.

"If we can actually understand how and why frequencies or magnitudes change of extreme events are changing, those are two components of risk. Understanding that risk is crucial for governments and businesses. For example, if you're managing a business, you may need to know whether there may be more droughts in the future because that may impact supply chain logistics and, ultimately, your bottom dollar," said Titley.

Scientific confidence for attributing extreme weather events is a three-legged stool, said Titley. To confidently link specific weather events to climate change, researchers need an understanding of the underlying physical causes of weather events, enough observational data to place a specific event within a historical context and the ability to replicate an event with computer models. For example, when examining hurricanes and typhoons, the lack of a high-quality, long-term historical record, uncertainty regarding the impact of climate change on storm frequency and inability to accurately simulate these storms in most global climate models raises significant challenges when attributing assessing the impact of climate change on any single storm.

Attributing the cause of extreme weather to climate change or other factors can "enhance scientists' ability to accurately predict and project future weather and climatic states," said Titley. Predicting both the frequency and intensity of extreme events–those that are rare in a location–could allow society to lessen their impact and potentially avoid loss of life and destruction.

The committee identified research priorities to further enhance the scientific community's ability to attribute specific extreme weather events to climate change. In addition to endorsing action on relevant items outlined by the World Climate Research Programme in 2014, the report recommends developing transparent community standards for attributing classes of extreme events, and formulating systematic criteria for selecting events to be studied. The committee also recommends that some future event attribution activities could be incorporated into an integrated weather-to-climate forecasting efforts on a broad range of timescales, with an ultimate goal of providing predictive risk-based forecasts of extreme events at lead times of days to seasons.

Are Climate Scientists Being Too Cautious When Linking Extreme Weather to Climate Change?

Are Climate Scientists Being Too Cautious When Linking Extreme Weather to Climate Change?