CHICAGO - A new scientific study shows that eating cheese may actually increase how much someone likes the wine they are drinking. The study, published in the October issue of the Journal of Food Science, used a new sensory evaluation method and found consuming cheese while drinking wine impacted the description and preference of different wines. 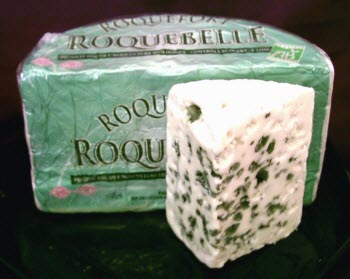 Roquefort, one of the four types of cheese evaluated in the study.Dominik Hundhammer, Wikimedia CommonsThe study was conducted at the Centre for Taste and Feeding Behavior in France with frequent wine and cheese consumers from the city of Dijon. The subjects evaluated four wines (Pacherenc, Sancerre, Bourgogne, and Madiran) using a new sensory evaluation method developed by the researchers to show how perception and liking of wine change after cheese intake over several sips, which is closer to what happens in typical consumption. The subjects were given a list of sensations which they used to indicate what caught their attention (called the dominant sensation) as they consumed the wine over three consecutive sips and after they swallowed.

Once the wines were initially evaluated, the task was repeated, but with a piece of cheese eaten in-between sips. Four different cheeses (Epoisses, Comté, Roquefort, Crottin de Chavignol) were sampled over different sessions with each wine.

Results showed that cheese consumption had an impact on the description for all wines, and impacted preference for most. None of the four cheeses included in the study had a negative impact on wine preference. Liking of each wine was increased or remained the same after cheese intake. In both red wines (Bourgogne and Madiran), the four cheeses decreased the duration of dominance of astringency and increased that of red fruits aroma. In the sweet white (Pacherenc), the duration of dominance of sweetness was not changed by cheese intake, but in the white dry wine, cheeses had an impact on the main aroma.

Related Article: How X-Rays Are Helping to Figure out Why Fat Is Yummy

"Thanks to our research we learned that the duration of the perception of astringency of a certain wine could be reduced after having cheese and that the four evaluated cheeses had the same effect. In short, when having a plate of assorted cheeses, the wine will probably taste better no matter which one they choose," lead author Mara V. Galmarini explained.

According to the authors, the sensory method developed in their work can help build better understanding of how the perception of one product is changed when consumed in combination with another. This information can help food brands communicate their products' characteristics, thus improving consumers' experiences.