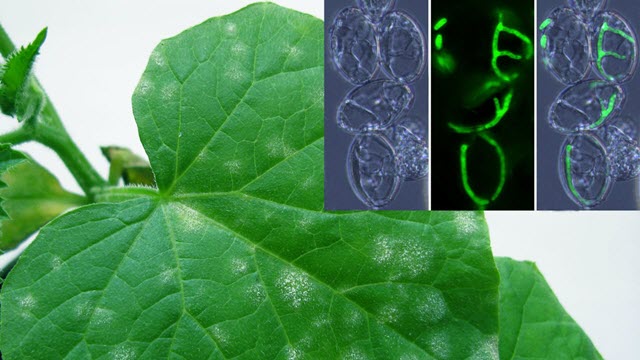 The big photo shows cucumber leaves infected with powdery mildew, while the small close-up exhibits a few powdery mildew spores (from the powdery mildew colonies shown on the big photo), parasitized by the mycoparasite (note the hyphae of the mycoparasite inside the spores). The close-up is a composite of three photos, left to right: DIC optics, fluorescence microscopy, and overlap of these two images.Credit: Márk Z. Németh, Alexandra Pintye, Áron N. Horváth, Pál Vági, Gábor M. Kovács, Markus Gorfer, and Levente Kiss

St. Paul, MN (September 2019) — Powdery mildew is a common fungal disease that infects many plants around the world, absorbing their nutrients and weakening or even killing them. In turn, powdery mildews are often attacked in the field by even smaller mycoparasites (fungi that feed on other fungi).

To address environmental concerns, and to better understand these interactions, a group of scientists working at the Hungarian Academy of Sciences, the Austrian Institute of Technology, and the University of Southern Queensland (Australia) genetically modified two strains of the mycoparasite to express Green Fluorescent Protein (GFP). As a result, the mycoparasites emit green light when examined with a fluorescence microscope, enabling researchers to better understand their structures and functions. This is the first study to explore these interactions with fluorescent protein biotechnology.

Their research revealed that these mycoparasites can live up to 21-days on mildew-free host plant surfaces, where they can attack powdery mildew structures as soon as they appear. Also of note, this research showed that these mycoparasites cannot spread in sterile soil or in decomposing leaves on the ground, showing that concerns about the potentially negative environmental impact of the BCAs are largely unsubstantiated.

These results, which can be found in "Green Fluorescent Protein Transformation Sheds More Light on a Widespread Mycoparasitic Interaction" published in the August issue of Phytopathology, present the first successful genetic transformation of a group of common mycoparasites that have also been used as a BCA of an important group of crop pathogens. They are important for both biocontrol studies of crop pathogens and the ecology of natural interfungal parasitic relationships.