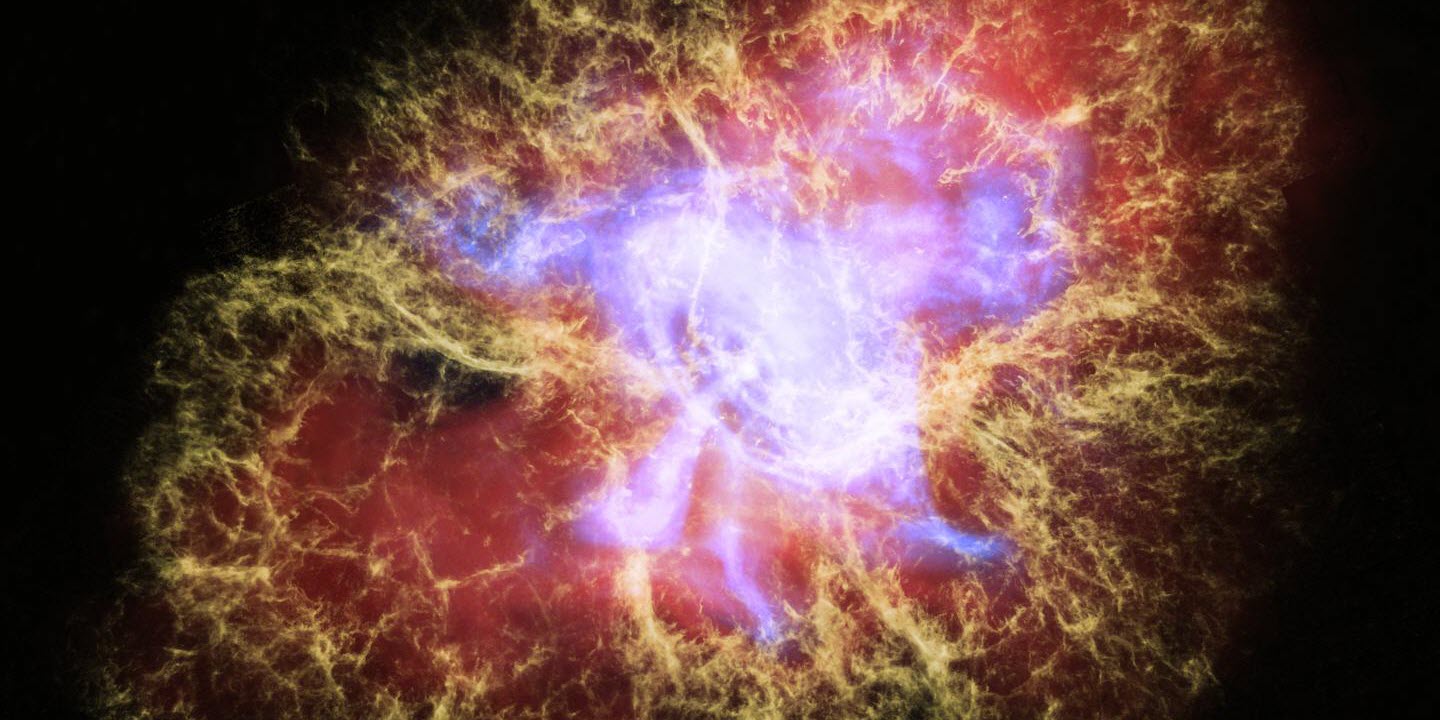 Crab Nebula is a supernova remnant. In the (Western) year 1054, Chinese astronomers recorded the supernova that blasted the nebula into existence.
NASA, ESA, J. DePasquale (STScI), and R. Hurt (Caltech/IPAC)

Nestled in the constellation Taurus, a spectacle of swirling cosmic gases measuring half a dozen light-years across glows in shades of emerald and auburn. The Crab Nebula was born of a supernova, the explosion of a giant star, and now, a lab machine the size of a double door replicates how the immense blasts paint the astronomical swirls into existence.

"It's six feet tall and looks like a big slice of pizza that's about four feet wide at the top," said Ben Musci of the supernova machine he built for a study at the Georgia Institute of Technology.

The machine is also about as thin as a door and stands vertically with the point of the "slice of pizza" at the bottom. A concise detonation in that tip thrusts a blast wave toward the top, and in the middle of the machine, the wave passes through two layers of gas, making them mix turbulently into swirls like those left by supernovas.

Laser light illuminates the swirls, and through a window, a high-speed camera with a close-up lens captures the beauty along with data on a centimeter scale that can be extrapolated to astronomical scales using well-established physics math. Getting the machine to produce results useful for studying nature took two and a half years of engineering adjustments.

"We suddenly go from a perfectly still chamber to a little supernova. There was a lot of engineering done to contain the blast and at the same time make it realistic where it hits the gas interface in the visualization window," said Devesh Ranjan, the study's principal investigator and a professor in Georgia Tech's George W. Woodruff School of Mechanical Engineering.

"The hard part was troubleshooting the artifacts that were not part of supernova physics. I spent a year getting rid of things like an extra shock wave bouncing around in the chamber or air leaking in from the room," said Musci, the study's first author and a graduate research assistant in Ranjan's lab. "I also had to make sure that gravity, background radiation, and temperature did not throw off the physics."

The researchers published their results in The Astrophysical Journal on June 17, 2020. The research was funded by the US Department of Energy's Fusion Energy Science program. Musci plans to collaborate with Lawrence Livermore National Laboratory to compare the machine's gas patterns with actual data on supernova remnants.

Not all nebulas are remnants of supernovas, but many are. They and other supernova remnants start out with a massive star. Stars are balls of gases, which are arranged in layers, and when a star explodes in a supernova, those layers enable the formation of the beautiful swirls.

"On the outside, the gasses have low density and on the inside high density, and very deep in the star, the density begins to force the gases together to make iron in the star's core," Ranjan said.

"After this point, the star runs out of nuclear fuel, so the outward force caused by nuclear fusion stops balancing the inward gravitational force. The extreme gravitation collapses the star," Musci said.

In the center of the star, there is a point explosion, which is the supernova. It sends a blast wave traveling at about a tenth of the speed of light ripping through the gases, jamming their layers together.

Heavier gas in inner layers stabs turbulent outcrops into lighter gas in the outer layers. Then behind the blast wave, pressure drops, stretching the gases back out for a different kind of turbulent mixing.

"It's a hard push followed by a prolonged pull or stretch," Musci said. 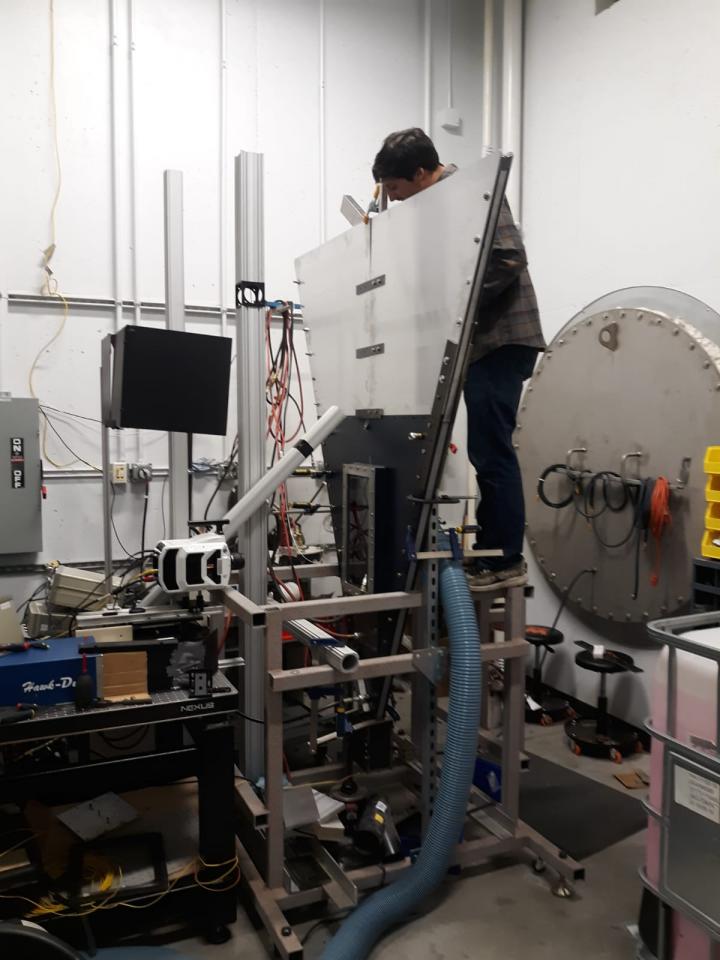 The lab machine that generates the miniature supernova remnants stands about six feet tall. At the bottom, a small detonation of an explosive sends the blast wave upward. It passes through the window in the center, where it jams layers of gas together to create turbulence. A high-speed camera captures the creation of the formations.
Georgia Tech, Musci

The researchers used small amounts of a commercially available detonator (containing RDX, or Research Department eXplosive, and PETN, or pentaerythritol tetranitrate) to make the concise miniature blast that sent a clean wave through the interface between the heavier and lighter gases in the machine.

"That is important to growing the initial perturbation that leads to turbulence because that unevenness puts a torque on the interface between the gas layers," Musci said.

Convolutions and curlicues ensue to make supernova remnants, which expand for thousands of years to become softer and smoother forms that stir our hearts with their splendor. To physicists, those initial twists are highly recognizable structures interesting for study: Turbulent spikes of heavy gas protruding into light gas, "bubbles" of light gas isolated in areas of heavy gas, and curls typical of early turbulent flow.

"One of the most interesting things we saw related to a mystery about supernovas—they shoot high-density gas called ejecta way out, which may help create new stars. We saw some of this gas propulsion in the device where heavy gas was propagated way out into the light gas," Musci said.

Supernova remnants perpetually expand at speeds of hundreds of miles per second, and the new machine could help refine calculations of those speeds and help characterize remnants' changing forms. The Crab Nebula's supernova was recorded in the year 1054 by Chinese astronomers, but for many other remnants, the machine could also help calculate their moment of birth.

The machine's insights would apply in reverse to help with the development of nuclear fusion energy. The process called inertial confinement fusion applies extreme force and heat from the outside inward evenly onto a tiny area where two isotopes of hydrogen gas are layered upon each other, one denser than the other.

The layers are forced together until the atoms' nuclei fuse, unleashing energy. Fusion researchers are striving to eliminate turbulent mixing. What is beautiful in the supernova makes nuclear fusion less efficient.