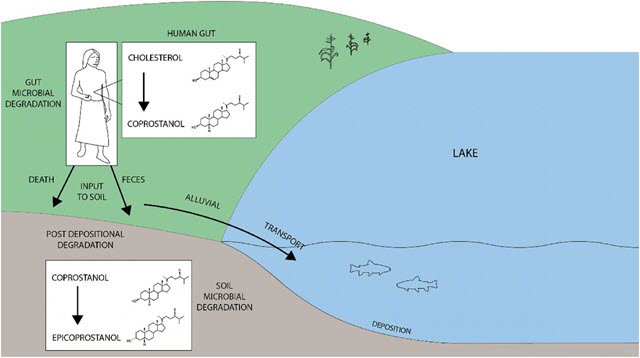 Fecal stanolsorganic molecules—located in sediment can give archaeologists new information about population numbers and changes, according to new research by faculty at Binghamton University, State University at New York.

"Archaeologists have just begun to explore how biomarkers like fecal stanols can provide information on past populations," said Carl Lipo, professor of anthropology at Binghamton University. "Traditionally, we have used coarse proxy measures such as houses and artifact numbers. These measures are plagued with problems, as this evidence may or may not be directly connected to changes in population sizes. Conditions of preservation, changes in settlement patterns, limited observations, shifts in subsistence activities, alteration in burial practices and so on can all lead to changes in artifacts without there being a connection to the number of people in the past environment."

Although other human materials can be unreliable in terms of population prediction, fecal stanols, which contain traces of human waste products, can be a more accurate clue into the history of a settlement. These organic molecules are present in sediment for hundreds to thousands of years.

In collaboration with colleagues at California State University Long Beach, Lipo studied a method of population change in a settlement called Cahokia, located just outside of St. Louis. The site is the location of one of the largest prehistoric populations in North America, existing between 600 to 1,500 years ago.

"Fecal stanols almost uniquely measure human presence in the environment," said Lipo. "While this work has been demonstrated in cold climates where preservation of stanols is more certain, this is one of the first archaeological cases where this method has been shown to work in a more temperate climate. The success here suggests that this way of studying past populations might very well lead to a revolution in our knowledge about the archaeological record around the world.

"In this study, we examined the abundance of fecal stanols in a lake core next to Cahokia," said Lipo. "What we found shows that population peaks for the site occur relatively early in its occupation and slowly decline. This finding contradicts suggestions that Cahokia underwent a 'collapse' event or was victim to massive floods that are known to have occurred."

This method of determining population change can be used to study other sites as well, said Lipo. He and Molly Patterson, assistant professor of geology at Binghamton University, are working on developing the technique at Binghamton.

"It has become relatively popular to think of the past as a series of periods in which cultures flourish and then catastrophically collapse," said Lipo. "Easter Island is a great example of this kind of thinking. While some of the interest in this kind of thinking relates to worries about our own future, the archaeological evidence often does not support such a view. Like Easter Island, Cahokia is often discussed as a cultural phenomenon that suddenly ends due to overpopulation or some natural catastrophe. Using empirical evidence available in the form of the fecal stanols, we can now see that the end of Cahokia was not so much a 'collapse' but a slow fading-away that took multiple centuries. Flooding events, for example, appeared to have had no effect on the relative population size."

The article, "An evaluation of fecal stanols as indicators of population change at Cahokia, Illinois," was published in the Journal of Archaeological Science.