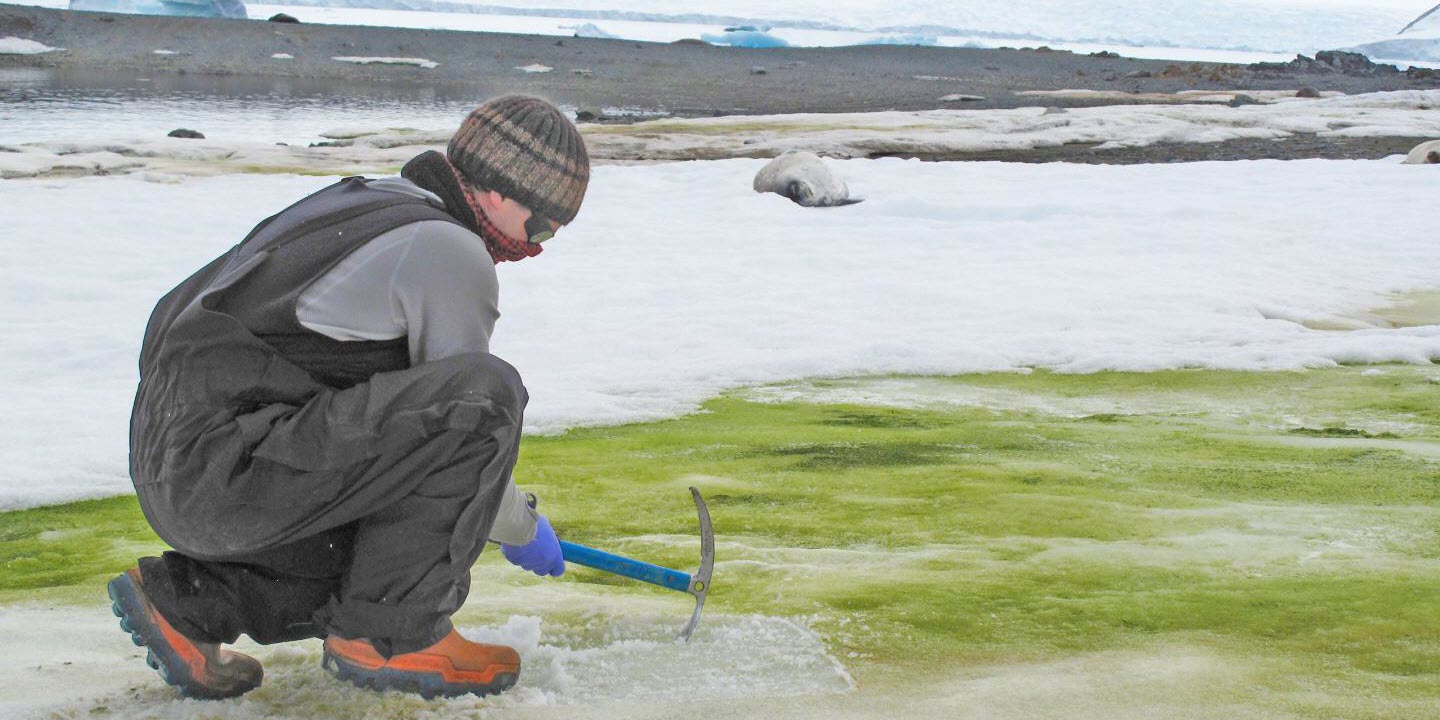 Scientists have created the first ever large-scale map of microscopic algae as they bloomed across the surface of snow along the Antarctic Peninsula coast. Results indicate that this 'green snow' is likely to spread as global temperatures increase.

The team, involving researchers from the University of Cambridge and the British Antarctic Survey, combined satellite data with on-the-ground observations over two summers in Antarctica to detect and measure the green snow algae. Although each individual alga is microscopic in size, when they grow en masse they turn the snow bright green and can be seen from space. The study is published in the journal Nature Communications.

"This is a significant advance in our understanding of land-based life on Antarctica, and how it might change in the coming years as the climate warms," said Dr Matt Davey in the University of Cambridge's Department of Plant Sciences, who led the study. "Snow algae are a key component of the continent's ability to capture carbon dioxide from the atmosphere through photosynthesis."

Blooms of green snow algae are found around the Antarctic coastline, particularly on islands along the west coast of the Antarctic Peninsula. They grow in 'warmer' areas, where average temperatures are just above zero degrees Celsius during the austral summer—the Southern Hemisphere's summer months of November to February. The Peninsula is the part of Antarctica that experienced the most rapid warming in the latter part of the last century.

The team found that the distribution of green snow algae is also strongly influenced by marine birds and mammals, whose excrement acts as a highly nutritious natural fertilizer to accelerate algal growth. Over 60 percent of blooms were found within five kilometers of a penguin colony. Algae were also observed growing near the nesting sites of other birds, including skuas, and areas where seals come ashore.

The team used images from the European Space Agency's Sentinel 2 satellite taken between 2017 and 2019, and combined these with measurements they made on the ground in Antarctica at Ryder Bay, Adelaide Island, and the Fildes Peninsula, King George Island.

"We identified 1679 separate blooms of green algae on the snow surface, which together covered an area of 1.9 km2, equating to a carbon sink of around 479 tonnes [528 US tons] per year" said Davey. Put into context this is the same amount of carbon emitted by about 875,000 average petrol car journeys in the UK.

Almost two thirds of the green algal blooms were on small, low-lying islands with no high ground. As the Antarctic Peninsula warms due to rising global temperatures, these islands may lose their summer snow cover and with it their snow algae. However, in terms of mass, the majority of snow algae is found in a small number of larger blooms in the north of the Peninsula and the South Shetland Islands, in areas where they can spread to higher ground as low-lying snow melts.

"As Antarctica warms, we predict the overall mass of snow algae will increase, as the spread to higher ground will significantly outweigh the loss of small island patches of algae," said Dr. Andrew Gray, lead author of the paper, and a researcher at the University of Cambridge and NERC Field Spectroscopy Facility, Edinburgh.

Photosynthesis is the process in which plants and algae generate their own energy, using sunlight to capture carbon dioxide from the atmosphere and release oxygen. There are many different types of algae, from the tiny, single-celled species measured in this study, to large leafy species like giant kelp. The majority of algae live in watery environments, and when excess nitrogen and phosphorous are available they can multiply rapidly to create visible algal blooms.

The researchers say that the total amount of carbon held in Antarctic snow algae is likely to be much larger because carbon dioxide is also taken up by other red and orange algae, which could not be measured in this study. They plan further work to measure these other algal blooms, and also to measure the blooms across the whole of Antarctica using a mixture of field work and satellite images.

Antarctica is the world's southernmost continent, typically known as a frozen land of snow and ice. But terrestrial life can be abundant, particularly along its coastline, and is responding rapidly to climate changes in the region. Mosses and lichens form the two biggest visible groups of photosynthesizing organisms, and have been the most studied to date. This new study has found that microscopic algae also play an important role in Antarctica's ecosystem and its carbon cycling.