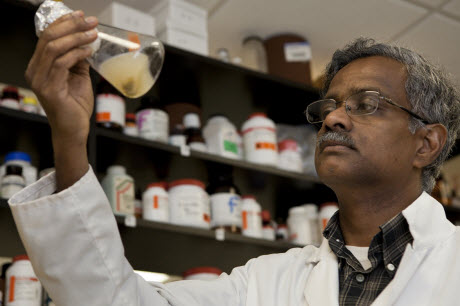 UF/IAFS horticulture professor Balasubramanian Rathinasabapathi, seen here working in his Gainesville lab, has found what could be a big key to converting microalgae to biofuel. He and former doctoral student Elton Gonçalves found that the transcription factor ROC40 helps control lipid production when the algal cells were starved of nitrogen.Photo Credit: Tyler Jones, UF/IFAS photographyGAINESVILLE, Fla. — University of Florida Institute of Food and Agricultural Sciences researchers may have found a key to converting algae to fuel.

The scientists have found what researchers call a “transcription factor,” called ROC40. Bala Rathinasabapathi, a UF/IFAS professor of horticultural sciences, likened a transcription factor’s role in controlling the expression of many genes inside the algae cells to a policeman controlling a large crowd. To draw lipids out of algae, scientists must starve the algae of nitrogen. Among the hundreds of proteins modulated by nitrogen starvation, the synthesis of ROC40 was the most induced when the cells made the most oil. The high induction of that protein suggested to scientists that it could be playing an important biological role, said Elton Gonçalves, a former UF/IFAS doctoral student in the plant molecular and cellular biology program. In fact, the team’s research showed that ROC40 helps control lipid production when the algal cells were starved of nitrogen.

Related Article: Algae Could Be a New Green Power Source

“Our discovery about the ROC40 protein suggests that it may be increasing the expression of genes involved in the synthesis of oil in microalgae,” Rathinasabapathi said. “Such information is of great importance for the development of superior strains of algae for biofuel production,” Gonçalves said. “We conducted this research due to the great socioeconomic importance of developing renewable sources of fuels as alternatives for petroleum-based fuels for future generations. In order to advance the production of algal biofuels into a large-scale, competitive scenario, it is fundamental that the biological processes in these organisms are well understood.”

Rathinasabapathi said this information is valuable for the future for engineering algae so it overproduces oil without starving the algae of nitrogen.

Lipids from microalgae provide an excellent renewable source for biofuels. The algae grow quickly, tolerate extreme weather conditions and do not pose the same issues as biofuel crops that are grown both for fuel and food.

The rub was if algae are deprived of nitrogen, the cells become stressed and begin to produce lipids, but their growth rate slows. And if alga is going to become a commercially viable fuel source, scientists must ensure that not only can it produce as much oil as possible, but also that it can grow as fast as possible.

Rathinasabapathi and Gonçalves co-authored the study, which has been accepted for publication in The Plant Journal. Other collaborators were Sixue Chen, an associate professor of biology and faculty director of the UF proteomics and mass spectrometry, part of the Interdisciplinary Center for Biotechnology Research; Jodie Johnson, an assistant scientist at the mass spectrometry facility at UF and Takuya Matsuo, an assistant professor at Nagoya University in Japan.