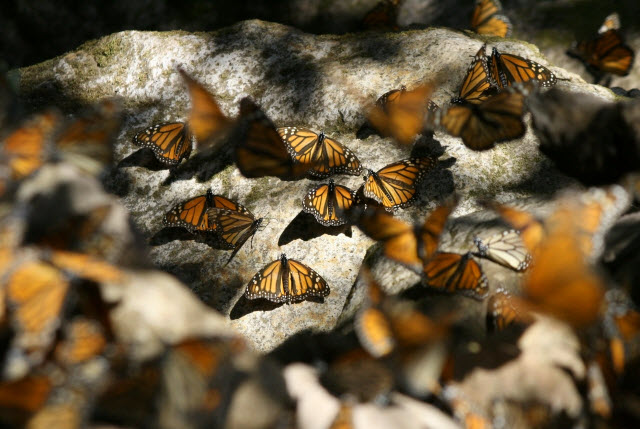 Each fall, monarch butterflies across Canada and the United States turn their orange, black, and white-mottled wings toward the Rio Grande and migrate over 2,000 miles to the relative warmth of central Mexico.

This journey, repeated instinctively by generations of monarchs, continues even as monarch numbers have plummeted due to loss of their sole larval food source—milkweed. But amid this sad news, a research team believes they have uncovered the secret of the internal, genetically encoded compass that the monarchs use to determine the direction—southwest—they should fly each fall.

“Their compass integrates two pieces of information—the time of day and the sun’s position on the horizon—to find the southerly direction,” said Eli Shlizerman, a University of Washington assistant professor. 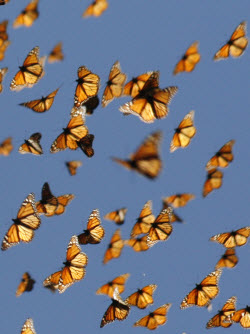 “We wanted to understand how the monarch is processing these different types of information to yield this constant behavior — flying southwest each fall,” said Shlizerman, who is lead author on the team’s April 14 paper in the journal Cell Reports.

Monarchs use their large, complex eyes to monitor the sun’s position in the sky. But the sun’s position is not sufficient to determine direction. Each butterfly must also combine that information with the time of day to know where to go. Fortunately, like most animals including humans, monarchs possess an internal clock based on the rhythmic expression of key genes. This clock maintains a daily pattern of physiology and behavior. In the monarch butterfly, the clock is centered in the antennae, and its information travels via neurons to the brain.

Related Article: Fungi at Root of Plant Drugs that Can Help, or Harm, Sick Monarch Butterflies

Biologists have previously studied the rhythmic patterns in monarch antennae that control the internal clock, as well as how their compound eyes decipher the sun’s position in the sky. Shlizerman’s collaborators, including Steven Reppert at the University of Massachusetts, recorded signals from antennae nerves in monarchs as they transmitted clock information to the brain as well as light information from the eyes.

“We created a model that incorporated this information—how the antennae and eyes send this information to the brain,” said Shlizerman. “Our goal was to model what type of control mechanism would be at work within the brain, and then asked whether our model could guarantee sustained navigation in the southwest direction.” 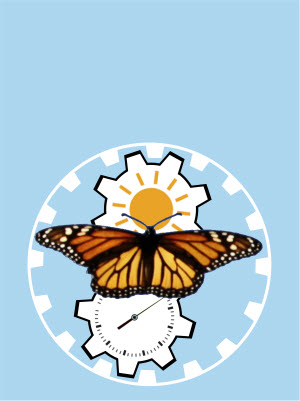 Shlizerman and colleagues modeled how the monarch brain integrates the time of day with the sun’s position in the sky.Image credit: Eli ShlizermanIn their model, two neural mechanisms—one inhibitory and one excitatory—controlled signals from clock genes in the antennae. Their model had a similar system in place to discern the sun’s position based on signals from the eyes. The balance between these control mechanisms would help the monarch brain decipher which direction was southwest.

Based on their model, it also appears that when making course corrections monarchs do not simply take the shortest turn to get back on route. Their model includes a unique feature—a separation point that would control whether the monarch turned right or left to head in the southwest direction.

“The location of this point in the monarch butterfly’s visual field changes throughout the day,” said Shlizerman. “And our model predicts that the monarch will not cross this point when it makes a course correction to head back southwest.”

Based on their simulations, if a monarch gets off course due to a gust of wind or object in its path, it will turn whichever direction won’t require it to cross the separation point.

Additional studies would need to confirm whether the researchers’ model is consistent with monarch butterfly brain anatomy, physiology and behavior. So far, aspects of their model, such as the separation point, seem consistent with observed behaviors.

“In experiments with monarchs at different times of the day, you do see occasions where their turns in course corrections are unusually long, slow or meandering,” said Shlizerman. “These could be cases where they can’t do a shorter turn because it would require crossing the separation point.”

Their model also suggests a simple explanation why monarch butterflies are able to reverse course in the spring and head northeast back to the United States and Canada. The four neural mechanisms that transmit information about the clock and the sun’s position would simply need to reverse direction.

“And when that happens, their compass points northeast instead of southwest,” said Shlizerman. “It’s a simple, robust system to explain how these butterflies—generation after generation—make this remarkable migration.”

Additional information can be found at the project’s blog.